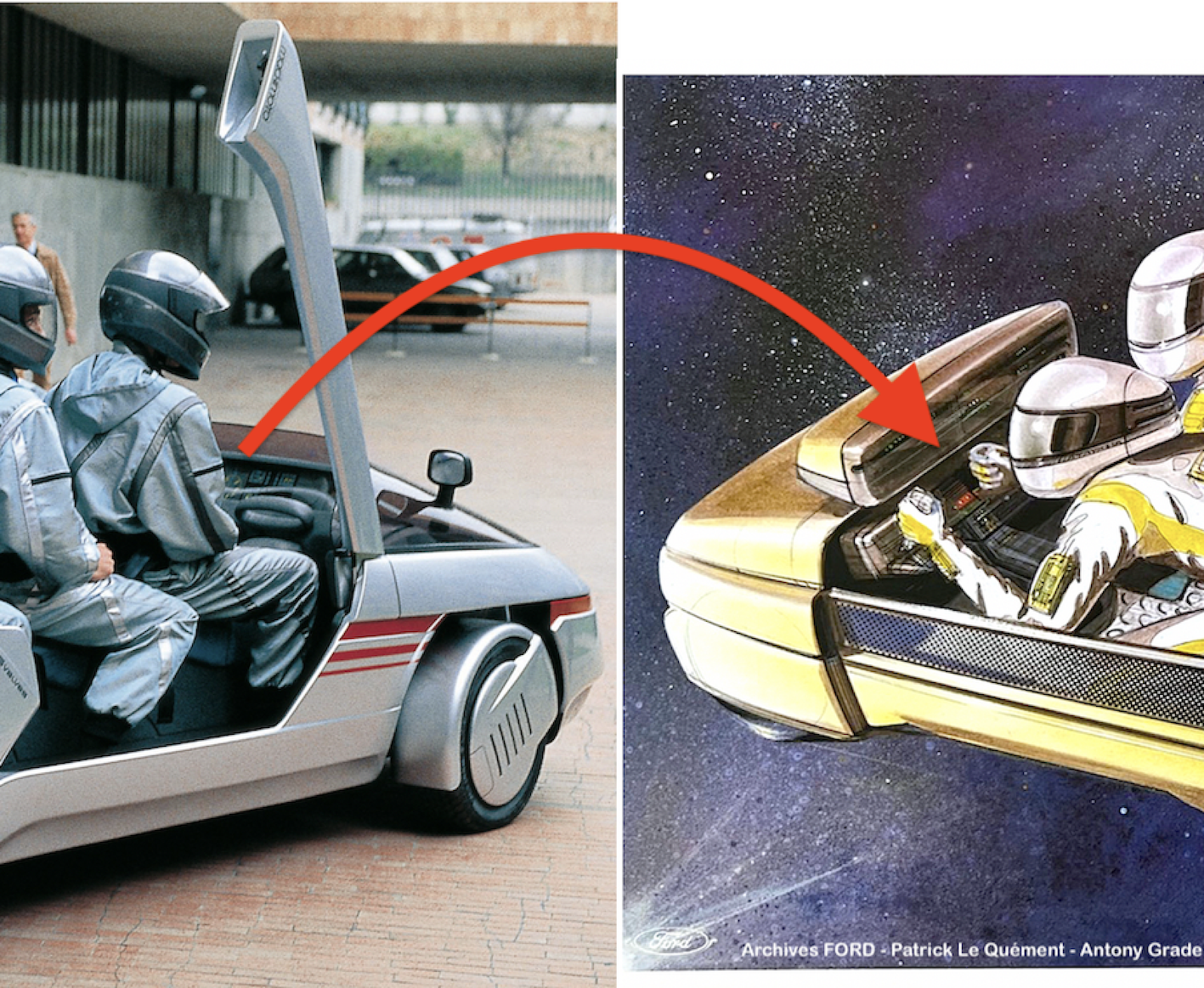 Like us, you thought the 1986 Machimoto concept car was the brainchild of Giorgetto Giugiaro. That is indeed the case, but the Italian designer, recipient like so many others of the 1984-1986 Ford Design Calendar, was undoubtedly very inspired by two drawings that came out of it, as we reveal here.

I am taking advantage of this revelation to republish an extract from the Machimoto essay I wrote in July 1986.

“The Machimoto is built on a tubular chassis with two boxes running under the two rows of seats. The engine at the front is that of a Golf GTI of the time. A four-wheel drive system was even offered in the same year on another Giugiaro concept car: the Orbit. The Machimoto’s cabin is accessed by lifting two slim doors and the passengers can climb up to six. The steering wheel deploys two levers to transform into motorbike handlebars and off you go!”

“In Machimoto, I have the dentures as a bumper and the skull as a roof. But it’s really impressive. On the motorway, the gears go up in chains and we are already at 160 km/h. The wind in the helmet and the air noise give the impression of driving at 400 km/h! First impression: it’s absolutely brilliant. “

“The noise makes it impossible to talk to the passengers and I wonder what the compact disc HI-FI system is doing here on the dashboard. At first you tend to lean in the bends but with four wheels, it’s not very useful. I squeeze my thighs on my seat to maintain my riding position. The other passengers have a big handle in front of them to hold on to.  The suspensions combined with the softness of the large seat make for a fairly comfortable ride. The ideal way to ride on small roads is without a helmet, and the Italian legislation allows it.” (This is 1986 NDA).

“Compared to the Volkswagen Scooter concept (presented in the same year, 1986), it is the Machimoto that gives the most motorcycle-like sensations. Before returning the Machimoto, I take care to clean the visor of the helmet with a spray can that reads “agitare bene la bombola”. I suddenly realise that it was Giorgetto Giugiaro who had indeed “agitare la bombola” before designing this novel concept! “

But that was before discovering the 1984-1985 Ford calendar, brought out of mothballs by Patrick le Quément’s friends and former colleagues at the American manufacturer!