Many of you think that upgrading a model, the famous “mid-life” or “phase-2”, is a quick and easy operation. This is not the case, quite the contrary. Sylvain Henry, a great designer by size and talent, ex-Peugeot and now Citroën for three years, deciphers for you the restyling of the Citroën C3.

The Citroën C3 born at the end of 2016 (below, sketch of Cyril Pietton’s first C3) marks the starting point for Citroën’s new identity and the foundation of a coherent range in this respect. C3 Aircross, C5 Aircross, C4 Cactus and Berlingo respect the fundamentals of this identity born under the reign of Alexandre Malval. The latter, now with Mercedes, has left his place to Pierre Leclercq.

But a style is never fixed, and the guidelines of an identity evolve long before the manufacturer has been able to renew its entire range. The 2016 CXperience concept car has laid the foundations for a significant evolution of this identity, with the wings of the double chevron flared at their ends. A concept that can be seen at the rear with the design of the lights. The next C4 has given concrete expression to these new styling themes. The small C3 therefore needed to be updated.

While the tail lights have not been modified for obvious cost reasons, the bow has evolved. Sylvain Henry explains that the team that worked on this restyling is not the one that designed the first generation. The basis of the work is obviously digital files that allow the new shield to be designed in a way that respects the structure. For example, the fixing points must be identical to the previous ones.

This digital work is done with millimetre precision, but the designer’s role is not only to redesign the room. It must remain within a predefined budget. On the shield of the C3 phase-2, the lower part that integrates the additional headlights has thus been retained.

1- The engine cover does not change.
2- Two new parts are created to surround the daytime running lights previously bordered by the wing of the “chevron”.
3- A “blade” is created, echoing the style theme of the new C4.
4- The optics are magnified and more technological than before. They are in a more elaborate design.
5- The lower part of the shield is identical to that of phase 1.
6- The contours of the grille are more geometric.
7- The lower chevron strip is made in one piece.
8- The lower “V” of the chevron is slightly lowered in order to perfectly balance the descent of the lower bar into the bumper.

A goldsmith’s work was carried out on the main optics, above. First of all, they are LED and the shape of the glass is more worked, approaching that of the new C4 (below).

Of course, the wings of the double chevron have been reworked to respect the new Citroën identity. The lower bar thus plunges into the shield, down to the main optics. What looks simple on paper, becomes more complicated in reality because this new arrangement of the wings of the chevron imposes the creation of new parts. But there is no question of multiplying them! It was nevertheless necessary to create two pieces that delimit the small daytime lights, previously encircled by the lower bar of the rafter, the one that today plunges into the shield. Another constraint, the lower “V” of the logo is slightly lowered to allow for perfect balance. The grille takes on a more elaborate shape.

In the end, the C3 phase-2 adopts Citroën’s new identity by modifying only the bumper, but does not forget a few details, such as the new demarcation between the roof colour and the body colour and simplifies the side airbumps (above).

Phase 2 is mainly used to update the colour palette but also to create new interior “materials and colours” themes. The new Advanced Comfort seats (which are not those of the C4 Cactus but are specific to the C3) adopt new upholstery colours.

The dashboard trim (above) has new finishes, one of which takes up the theme of a material found on board CXperience (below). 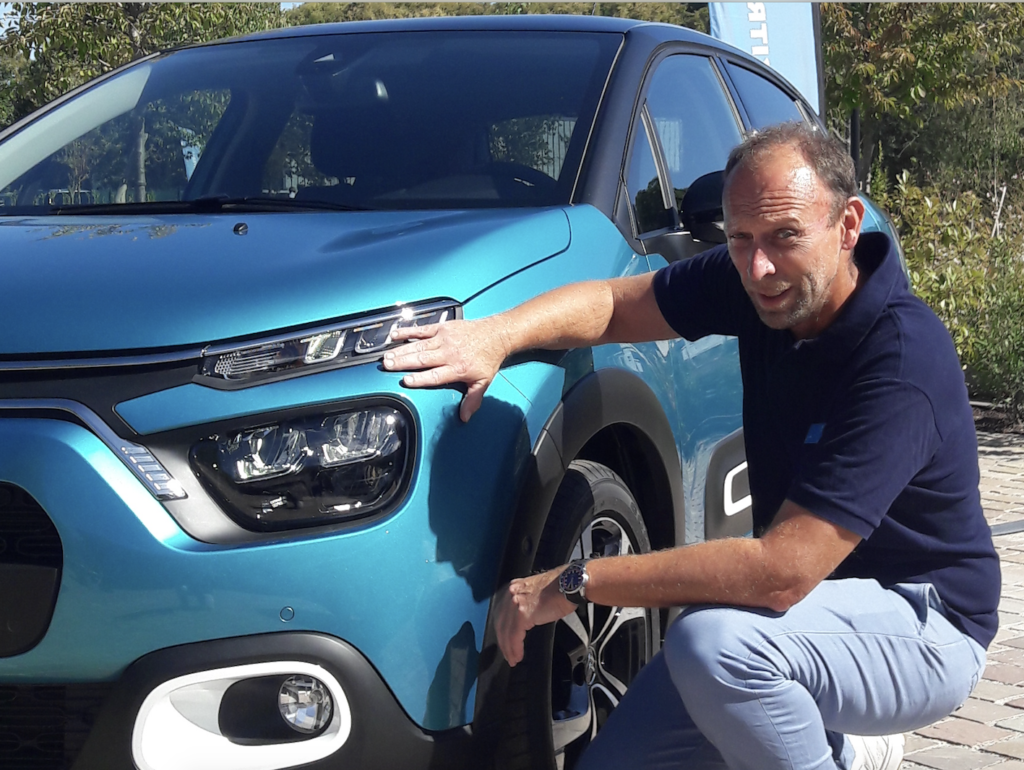