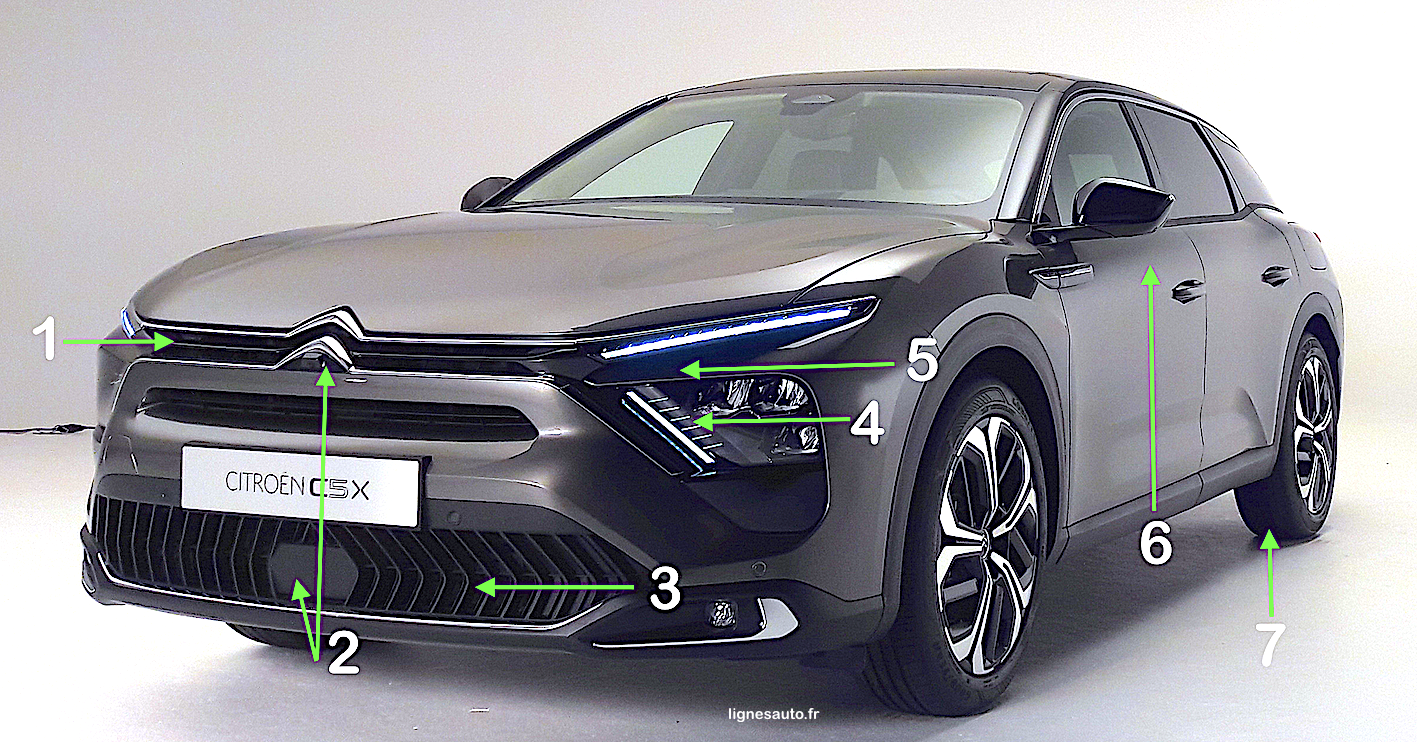 Citroën is back in the large road car segment, these saloons that are eager to cover a lot of miles and which, in the case of the new C5 X, offer you this in royal comfort. But beware, if the DS brand is aiming for premium and Peugeot is moving upmarket, Citroën remains a generalist manufacturer.

Citroën has opted for a single silhouette for two functions: saloon and estate. This shooting-brake design is popular, but the dish is accompanied here by another flavour, surprising in this segment: that of SUV. The C5 X is raised on its large 720 mm wheels and adopts black wheel arches, a very SUV style. Let’s decipher its surprising design: it’s a Citroën!

The C5 X’s proportions are based on a long, almost flat bonnet that hides only three petrol engines: 130, 180 bhp and a 225 bhp plug-in hybrid. No more diesel, so much the worse for heavy drivers.
Note the 72 cm wheels, the sloping roof and the significant overhang at the rear. The wheelbase is not the longest available: 2.78 m compared to 2.85 m for the Chinese Peugeot 508 L. Citroën did not choose it for industrial reasons: the two cars are certainly produced in China, but perhaps not in the same factory.

1- The grille is no longer two-slat but three, with a central black element.
2- Unlike the Peugeot 308, the C5 X cannot hide its radars and cameras behind the logo but integrates them under the double chevron and in the false low air intake.
3- The latter is inspired by the design of the restyled C3 Aircross.
4- The DRLs are also diffused inside the optical block.
5- A blade, as on the C4, separates the headlights from the DRL.
6- No edge line, but suppleness and tension on the sidewalls.
7- Note the 19″ Tall&Narrow tyres

The curvaceous, edge-less sidewall design theme is inspired by the CXperience concept car. It was very difficult to develop and required a great deal of attention to detail. It all comes together in the clay model. Congratulations once again to the modelers. This is a theme that can also be found in… Porsche!

The high posture imposed by the specifications and customer studies also has its origins in the choice of 72 cm wheels. 25 mm of ground clearance increase (additional wheel radius) is already included in this dimension!

A Citroën, more than any other car, has to be aerodynamic. The C5 X clearly shows this with, in 1, the huge spoiler at the base of the window, in 2, the latter being rather curved and not concave and in 3, the addition of a long spoiler on the roof.
The airflow path is thus controlled: in A, at the end of its journey on the roof, it slides UNDER the spoiler (B), is rejected on the on the rear window (C) and expelled by the spoiler without creating a vortex (D).

This view of the roof towards the rear of the vehicle clearly shows the aerodynamic gap created under the spoiler.

This view of the rear panel and wing with its tight curves also reveals the continuous glazing around the perimeter of the car and, in 1, the spoiler and in 2, the rear wing.

A high car is good for the driving position. But to get into the C5 X, you have to be able to lift your foot over the door sill.

Probably the most spectacular view of the C5 X. The figures will show whether the mix of three concepts (saloon, estate and SUV extension) is compatible with the large road car segment, as the manufacturer’s surveys seem to claim.