Pierre Leclercq, Citroën’s design director, can count on his two style directors: Jean-Arthur Advenier for the interior, and Cyril Pietton for the exterior. It is the latter that we obviously met to discuss the design of this new Citroën.

Coincidence or not, Cyril Pietton and Frédéric Angibaud, the author of the C5 X design, both have a good twenty years of experience with the French manufacturer! “It’s true”, admits Cyril, “but we can almost say more today because before my PSA period I worked at Fiat!” For those who love concept cars, Cyril is the author of the small C3 Airplay of 2005 (Christophe Cayrol for the interior) and of the current generation C3 (2016) which, under the direction of Alexandre Malval, has relaunched the new Citroën identity below.

Twenty years, how do you explain such loyalty? “I am very attached to the brand! I feel good here, and what’s important, of course, is the environment with the team. I attach a lot of importance to people. At Citroën, I think we have a lot of freedom and we don’t restrict ourselves.” His role today as exterior design director, and for the past seven years or so, “is to supervise the role of each of the designers working on the project.”

So of course, when you have 20 years of loyalty, you have seen and still see young talent coming into the studio. How do we instil the brand’s values in them? “It takes time, of course, but our wealth is precisely in being able to work with these young people and older ones like Frédéric. For young people, it sometimes takes a little time before they get into a production vehicle, apart from some who can get the Citroën feeling from the start.”

“To discover the history of the brand, we are lucky enough to be able to go to the Citroën Conservatory regularly. But we don’t necessarily look in the mirror, it’s not in the Citroën spirit. Because we know what we have done, there is a kind of perfume and we soak up this perfume. The C5 X, for example, is naturally a Citroën, and yet we didn’t force ourselves, we didn’t put a Citroën CX beside us in the studio!”

But perhaps Cyril and his team have put the CXPerience concept alongside them? “A concept car is certainly the most classic exercise to explore the proportions or themes such as the light signature. As far as the latter is concerned, we had clearly reached a point where it had to evolve because we saw that many competitors were moving into our territory. This is certainly flattering, but we had to anticipate and react with our new signature.”

How did the programme that brought the C5 X to life begin? “It’s a classic programme, so it started with the phase advance during which we worked on the silhouette and the attitude of the car. We then tested many concepts, we even made a three-box but we didn’t even look at it! We naturally went for this shooting-brake silhouette in line with the product. Then we launched the sketch competition.”

Even if Cyril Pietton doesn’t like the term “competition”, a choice had to be made and Frédéric Augibaud’s project was chosen after the entire studio had been put to work on it. “We couldn’t afford to have just three designers competing! It was important that the designs were all over the place! But if there is only one winner, those who lose always bring something to the table and I am well placed because in my career I have not necessarily won many competitions even though I have often been a finalist. It’s not a tragedy, it’s a team effort in the end.”

The CXperience concept car was unveiled in 2016. What was the status of the C5 X project at that time? “The phase advance of the project was conducted in parallel with the concept car. There was the momentum of the concept, which in particular allowed us to create manifests internally.”

The theme of edge-less design can be seen on both cars. “It’s a style that’s complicated to develop but we’re committed to it. It expresses fluidity and softness. But the danger with these curves without an edge line is that they can be too heavy. So the spokes have to be worked on very carefully, and we spend a lot of time on them. The trunk required a lot of work with the winding of the sides. But in the end, the curves with their spokes suggest tension and a certain power. There are still a few classic edge lines to lighten the vehicle, especially at the bottom of the body to liven it up.”

Let’s be honest: the C5 X seems to us to be a reference to the XM rather than the CX or C6, especially with its all-glass beltline. “This is a typical Citroën theme. In particular, we always try to liven up the rear quarter, but we didn’t want to use too much chrome. The upper chrome bead gives the car momentum; it starts at the windscreen base and fades out over the rear quarter.”

Unlike the CX, C5 and C6, the C5 X does not have a concave rear window, which Frédéric Duvernier (in charge of concept cars), at the time of the presentation of the CXperience, was very keen on, explaining that it had two interests: to allow a three-body effect to be seen and to provide better aerodynamics and visibility by allowing the spoiler to be positioned as low as possible. Cyril Pietton recognises that this concave window is a strong element of Citroën design, “but so are the covered rear wheels of the DS, GS or SM!” he laughs. “We’re not obsessed with the past; a concave window would have plunged us into the world of the three-box, whereas we had clearly decided to go for the spirit of the shooting brake.”

The aerodynamics, which are synonymous with fuel savings (this is certainly not very new but is now imperative for the calculation of C02), are very visible on the C5 X, particularly in its rear section with a spoiler at the end of the roof and a huge spoiler planted at the base of the window. A handicap for the designer? “No, he knows that there will be an aerodynamic element in this part of the car but he doesn’t get hung up on it. In the end, the spoiler is not necessarily highlighted, it is drowned in the glass surface and always in black, whereas the roof spoiler has added value in terms of style. It gives momentum, it’s hooked up to the chrome and the body colour when the roof is not black.”

To sum up, Cyril Pietton believes that “in terms of balance, we were lucky to have very good engineers, so we can’t complain! We had all the ingredients in style: the big wheels, the black wheel arches, the windscreen layout… I have no regrets about this programme. If I had any, it would be a detail that you yourself would not see!”

Wed Apr 20 , 2022
Citroën is back in the large road car segment, these saloons that are eager to cover a lot of miles and which, in the case of the new C5 X, offer you this in royal comfort. But beware, if the DS brand is aiming for premium and Peugeot is moving […] 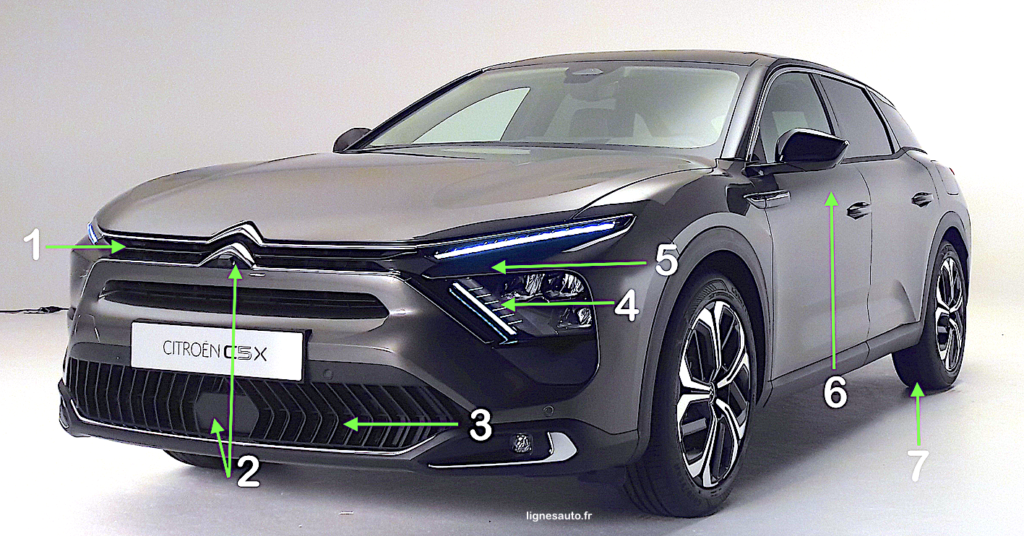