Until 15 September 2019, the Porsche Museum is celebrating the 50th anniversary of the 917 with a large special exhibition entitled “Speed Colours – 50 Years of the 917”. A total of 14 exposure models – including ten 917 that alone have a combined power of 7,795 hp ! – are exposed. The Porsche Museum presents for the first time to the public a 917 conceptual study in homage to the first Le Mans victory in 1970 (below).

The red and white demonstration car was designed by a small team of designers and engineers, although with Porsche’s entry into the LMP1 category of the FIA World Endurance Championship (WEC), this model has remained a purely conceptual study. In addition, a selection of race posters and small technical exhibitions will complete the museum’s exhibition. Ready for the visit ? First discover the museum here : https://www.porsche.com/museum/en/

A reminder for those who are distracted: this year, the Porsche 917 celebrated its 50th anniversary. Perhaps the most famous racing Porsche of all time made its debut at the Geneva Motor Show on March 12, 1969. The Porsche Museum celebrated this historic anniversary with great pleasure. Porsche has returned the first 917 to its original condition, as it did 50 years ago when it was first presented. The 917-001 has undergone various changes over time. “Our approach to the restoration of classic cars has changed considerably over the past ten years,” explains Achim Stejskal, director of the Porsche Museum. “From now on, the museum attaches great importance to the conservation of the old ones and to taking into account the relevant history of its exhibitions.“

The 917-001 marks the beginning of an unrivalled career for the 917. It was designed for the Le Mans 24 Hours and to win the World Championship and was the first of 25 cars that had to be built to meet the homologation requirements. Its designer was Hans Mezger, who was responsible not only for the twelve-cylinder engine, but also for the entire vehicle. Of course, Ferdinand Piëch was (already) not far away !

The 917-001 was first presented in Geneva in March 1969, with a white body and a green front part; it had a new look for its presentation at the Frankfurt International Motor Show the same year, for which the car was repainted in white and orange. When Porsche later announced the transfer of its activities to the J.W. Automotive Engineering team, led by John Wyer from the UK, the 917-001 was again used, but with the colours of the American oil company and sponsor Gulf: light blue and orange.

For more than a year, museum mechanics, former technicians and engineers from Zuffenhausen and Weissach, as well as the Historical Archives and partner companies, have been working on the restoration of this original 917. The project was particularly difficult from the outset because of the many transformations that the car had undergone at the time as a test and presentation vehicle. The top priority was the conservation and reuse of the car’s original materials wherever possible and technically feasible.

The success of the 917 is legendary. The car managed to win an overall victory in its first year of participation in the 1000 kilometre race in Zeltweg, Austria, in 1969. In 1970, Hans Herrmann and Richard Attwood won the Le Mans 24 Hours – the greatest success Porsche has ever had in motor sport – a victory that was renewed thanks to Helmut Marko and Gijs van Lennep in 1971. After the development of the 917 to 917/10 and 917/30 turbo versions with more than 1000 hp, George Follmer and Mark Donohue were able to dominate the North American CanAm series in 1972 and 1973. These Porsche models also proved unbeatable in the Interserie, the European equivalent of this event. 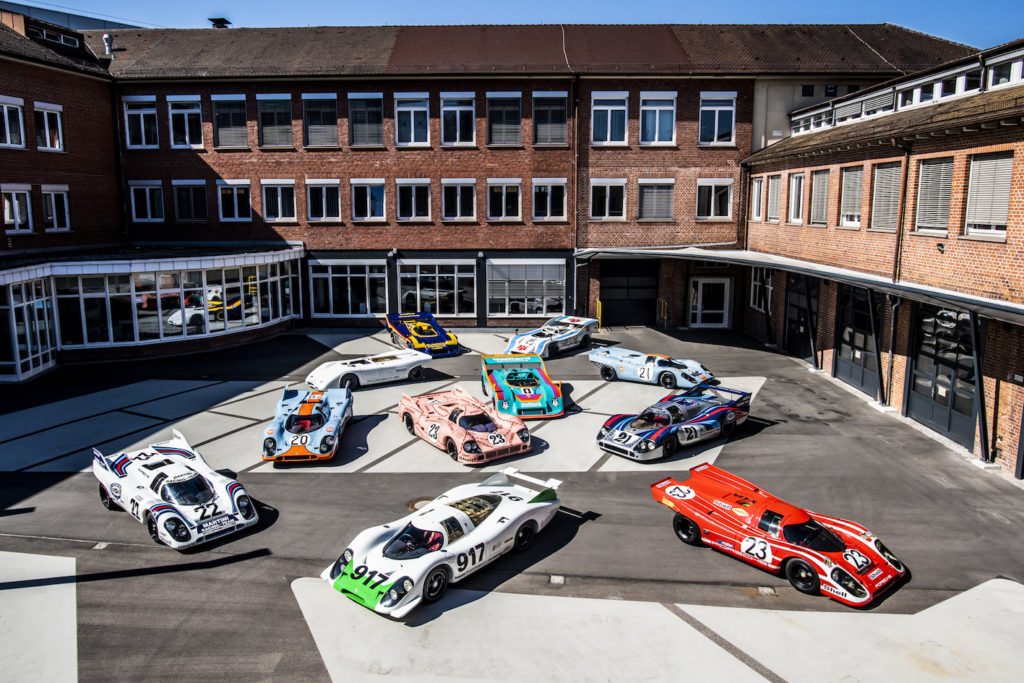