Romain Gauvin, the designer of Citroën’s 19_19 centenary concept car (below), is leaving the French carmaker for a long journey to California, to the heart of the advanced design office of the Chinese GAC group.

Romain Gauvin graduated from Strate in 2005 and began his career in Germany. “I was one of the very first designers at the Kia studio that had just been created in Frankfurt. My work was appreciated by Raphaël Bretecher who offered me the opportunity to join the Hyundai team. Raphaël is a mentor to me! I have an anecdote from my time in Germany. When I arrived on the day of my interview, I had the impression that the staff had forgotten about the appointment! I was finally received by Thomas Bürkle and Grégory Guillaume, and I had brought my portfolio with a collection of drawings. Grégory (below with the Venga concept) quickly put the portfolio aside to look at my sketches, and to my surprise, at the end of the interview, he offered me a job on the spot. I then worked on the Kia Venga project.”

This immersion in the professional world, and moreover in the international arena, will end in 2010 when Romain Gauvin joins the Citroën design team. 2010 saw a veritable explosion of concepts at the French manufacturer with Jean-Pierre Ploué at the head of Citroën and Peugeot design, who had just appointed Gilles Vidal as Peugeot stylist and Thierry Metroz as Citroën stylist. “Joining the Citroën styling and design teams in 2010 was a dream come true!”

Was it a voluntary choice or an opportunity? “I can say that it was a choice! Citroën is a passionate brand. When I saw the advertisement to join them, I had spent five and a half years in Germany. And in a designer’s career, five years was the right time to evolve, to change your world. You question yourself, you become a ‘senior designer’ and you think about what to do next, of course. Coming back to France and working for Citroën was fabulous at a time when the brand had just released some incredible concept cars, such as the C-Métisse in 2006 and the GTbyCitroën in 2008 (above with Gilles Vidal). At the time, there was Citroën design and everything else!”

This beautiful story with Citroën is a love story that will last eleven years! “Citroën is a brand with a passion, which has infused itself into me. I had a great time, especially when Alexandre Malval (above with the C3, the initiator of the Citroën revival) arrived with the ambition of reinventing the brand identity after the split with DS. When the two brands were split, we looked back at the history of Citroën. There was something beautiful to build because this brand is a fascinating story. We immersed ourselves in the relationship that customers had with the brand and I rediscovered the cultural links between Citroën, Paris, France… Personally, I went even further with the centenary concept car.”

A concept car that put Romain in the spotlight. Enough to put him on the list of ‘hunted’ designers? A long silence before Romain speaks again: “I don’t think you can say that. With 19_19 I gained more confidence, it’s true. It’s such a strong concept car that represents a number of projects that I have carried out internally. At Citroën, I was a bit of a head hunter. Let’s just say that I didn’t necessarily have the most accomplished proposals, but certainly the most courageous! So when 19_19 became a reality, I said to myself that there was the possibility of pushing creativity to this point, without the obligation to be reasonable. I had quite a few unrealized projects comparable to 19_19 in my drawers.” Below, a personal project of Romain in the world of motorbikes. And here too : http://lignesauto.fr/?p=15333

But the page of this centenary concept car and of the countless projects realised during these eleven years is now turned. Was it a difficult decision to make, with nights when sleep was disturbed? “Yes, it is necessarily complicated because it is not only a personal choice. I have a family and there is the change of country. For my wife, it means changes in her career and changes for the children too! On top of that, I’ve just finished a short stint in the Lancia style (* see at the end of this post) which is a fabulous adventure. So when it came time to choose, I did as many do, a chart with the pluses and minuses! It’s effective!”

In this transfer to distant horizons, Romain is fortunate to be able to benefit from a transition period due to Covid and its restrictions on intercontinental travel. “Today, I am telecommuting while I sort out visa issues and travel to the United States, because the news is changing on a daily basis.”

This is not necessarily the most difficult situation, as Romain has the creative material at home and the GAC studio in California is 100% digital. “I haven’t met everyone there yet. The studio is quite small and it has a rather surprising status because there is no modelling stage, it is a totally digital studio and there is no physical model.” This is not necessarily to Romain’s displeasure, as he is part of this pivotal generation that knows both the 3D and physical worlds. “It’s true, I have no problem with that. I started my career working with 1/1 scale models, with clay modelers, and I was familiar with this virile “contact” with English subcontractors! It was just as natural for me to switch to the digital world, which immediately fascinated me!”

GAC is an important Chinese manufacturer (above the Entranze concept) which relies on its Californian advanced design entity to progress further. In the United States, Romain will not be in a completely unknown land as he will be meeting designers he has already worked with such as Pontus Fontaeus, now Executive Design Director of the Los Angeles studio, where the father of the 19_19 will work. “At the beginning of my career, when the Hyundai-Kia studio was formed, it recruited quite a few designers from the VW studio in Sitges, such as Grégory Guillaume, Raphaël Bretecher and Pontus Fontaeus. At that time, there was a sort of clan of Sitges alumni in Germany and even though I never worked at Volkswagen, I was trained with their methods. Today, as in the past, I need this relationship of trust with people I know, on whom I can rely. It’s important to know that I can find people I respect, like Pontus. (below)

We wish the whole team a great time in California, even if we mustn’t talk too much about the San Andreas fault that scares some foreigners who go there! But if there is a shaking earth at the moment, it’s the design planet where the rush of creative transfers doesn’t seem to slow down!

(*) As soon as the PSA-FCA merger was completed, and probably even a little earlier, the design teams started working on the rebirth of the Lancia brand, which is now part of the Stellantis Premium division alongside DS and Alfa Romeo. A Lancia brand design director should be put in charge of this new small team. But in a first phase, some ex-PSA designers, including Romain Gauvin, have started working with the Turin team. Romain explains that “I didn’t have the time to go to Turin but I worked on projects with a small dedicated studio, made up of designers from all over the world, to get Lancia on track, it’s a great adventure. It’s really a reflection of the Stellantis group.”

Below, read the interview with Romain Gauvin at the presentation of the Citroën 19_19 concept car in 2019 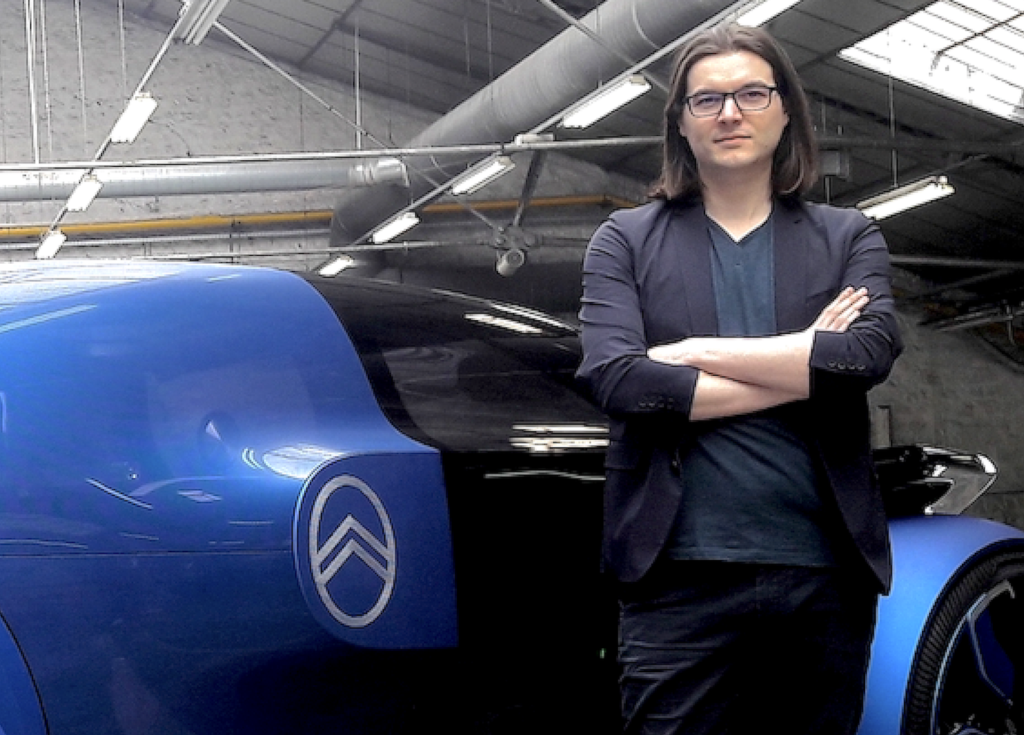