Who could have imagined that one day Peugeot would compete with Audi in the field of the top-of-the-range, 100% electric saloon? The Audi Grandsphere, which will be unveiled in September 2021, is intended to be more modern, futuristic and eco-friendly than the big A8. Until then, you had to look to Mercedes, BMW and other status sedans to dare to challenge the Audi. But 16 months after the revelation of the vision of a saloon “that combines the luxury of a private journey in the greatest of comforts with a complete on-board experience“, according to Audi, Peugeot is proposing a manifesto that wants to take on the German! Is the Inception Concept up to the challenge of creating the best electrically powered luxury saloon?

Audi said in 2021 that the Grandsphere concept embodies “technologies and design elements that will be found in future Audi models within a few years.” So it’s serious. No less ambitious on the French side: “the manifesto Inception Concept will inspire the Marque’s future products, up to the most compact, from 2025. Up to the most compact, so 208 and 2008 no doubt.

The German explains that the Grandsphere concept is “an approach to sustainability with the goal of carbon neutrality in the near future, throughout the value chain.” Peugeot is similarly adorned as, in the words of Matthias Hossann, Peugeot’s design director, the Inception Concept “reinvents the spatial experience of driving while illustrating some of our thinking that will enable us to reduce Peugeot’s carbon footprint by 70% by 2030. The transformation of the Marque concerns all aspects of the design, production and life of the Peugeots of tomorrow. Design is fully involved in this transformation.”

For Audi, “Level 4 automated driving makes new dimensions of freedom possible: in this world, the interior is transformed into a spacious sphere of experience without steering wheel, pedals or screens.” Peugeot is obviously evolving in the same universe of a cabin redesigned for autonomous driving.

However, Audi is working on the scale of the powerful Volkswagen group and is developing its own Level 4 autonomous driving system with CARIAD, the think tank within the VW group, with a view to introducing this technology in the second half of this decade. This will be at the same time as Peugeot unveils its new ‘STLA AutoDrive L4’ platform with the Inception Concept, which will be coupled with the STLA-Brain (artificial intelligence input) and STLA-Life, already seen in the e-Legend, which also incorporates artificial intelligence to provide a personal assistant to passengers.

And since we’re talking about platforms, let’s take a look at the platforms underneath the two belligerents’ bodies. For Audi, it is the inauguration of a brand new generation, called PPE for Premium Platform Electric. It offers the possibility of loading a battery module of approximately 120 kWh for a range of 750 km. Peugeot is responding with another new platform, the STLA Large. With the Inception, this platform carries a 100 kWh battery for a range of 800 km. That’s more kilometres covered for the Peugeot despite a slightly smaller battery in kWh. The Audi announces 720 bhp compared to the Peugeot’s 680 bhp. Both platforms operate on 800 volt technology.

We are able to announce that this STLA Large platform with its 800 volt technology will also be able to carry a battery pack of at least 120 kWh, like the Audi. Combined with the two “EDM” engines of 250 kW and 350 kW (340 and 475 hp), this platform will be able to offer different configurations, such as a simple rear-wheel drive with the 340 hp engine, and a four-wheel drive with the addition of another 340 hp engine at the front. Finally, the ultimate configuration, which seems to be in the pipeline, would offer four-wheel drive with the two 475 hp engines positioned on each of the trains, i.e. 950 hp. It remains to be seen whether this configuration will be chosen for a potential Peugeot, or reserved for Stellantis’ Premium and Luxury brands, namely Alfa Romeo, DS, Lancia and Maserati.

As for the range, based on the potential developments expected in this rapidly changing field, Audi announces “ten minutes to charge the battery to a level sufficient to power the car for more than 300 kilometres”, while Peugeot indicates that “the battery recharges the equivalent of 30 km of range in one minute.” Don’t get out your calculator: it’s identical for both cars! So Peugeot would be able to match the best Audi of the mid 2020s? Yes, and when we talk about Peugeot, we can obviously associate all the silhouettes of the brands that will benefit from this STLA Large platform within the Stellantis group.

In the two long sedans of the future, Audi is talking about a conversion of the front area of its Grandsphere into a driving delegation configuration. “The entire width of the space is freed up, with a perfect view through the large front and side windows, as well as maximum movement possibilities.“

The German manufacturer cannot compete with the French on this theme, as the Inception Concept takes advantage of its new platform and concept car status to free itself from the front crossbar and even the dashboard. The panoramic windscreen extends right down to the feet of the front occupants. Peugeot’s proposal is more accomplished in terms of architectural research for the cars of the end of the decade.

In the rear, Audi remains committed to the idea of moving the world of today’s living into a sedan of the future. On board the Grandsphere is a “two-person upholstered bench seat with an armrest, while the two front seats are designed for first-class comfort and space.” Welcome to Grandma’s. Forget the bench seat in the Inception. The rear passengers curl up in seats with a novel design from the world of rather futuristic furniture. They are covered with 3D printed velvet material for the floor, and the “inflatable” parts are taken from the simple adjustment pockets of the current seats, totally reconditioned. It’s very futuristic and clever, because – as the saying goes – it’s eco-responsible!

It’s still a much more elaborate approach than in the Audi, where wood and wool are still used. Let’s face it, the German carmaker states that “many of the materials, such as the hornbeam veneers, come from sustainable cultivation or are made from recycled raw materials.” Good, but there is room for improvement in terms of creativity and ingenuity.

So I can already hear the sceptics writing that Peugeot is not ready to release its Inception as is, when the future electric Audi that will support or even replace the A8 is already in the pipeline (below). But in the very short term (2025-2026), the next Peugeot 208 and 2008 will adopt the Hypersquare and many of the technologies deflowered by the Inception.

The Peugeot concept also gives a good technical indication of what the other brands in the group using the STLA Large will produce by 2026. And since LIGNES/auto is objective, here’s what the Audi Grandsphere has more than the Inception. After all, Audi is a brand that has become a premium brand in less than thirty years. Ferdinand Piëch assigned this desire to move upmarket at the time by playing on several cursors, including those of technology (all-wheel drive of a new kind in 1980 on the Quattro coupe) and aerodynamics (Cx of 0.30 on the Audi 100 of 1982 in basic version). The Grandsphere concept thus adopted the technology of active controlled suspension and integrated a rear wheel steering system on the multi-link axle. Renault offers this rear wheel steering system, the positive effect of which is relatively unknown to customers.

On board, although the Audi is far from achieving the degree of transformation of the cabin of the future that Peugeot is offering, it nevertheless has gesture controls via eye tracking: it guesses, according to the movement of your eyes, which control you want to reach and takes charge of the operation of that control without you even touching it. A sensor directed at the eye detects the line of sight when a control is to be engaged. The passenger only has to make haptic-like gestures, without bending over, and can operate the system without touching anything.

The last piece of equipment that the Peugeot does not need, the Grandsphere concept conceals a compact cooler between the front seats under a metal trim, with two glasses and an elegant bottle with a high-end design. “For non-alcoholic drinks“, the manufacturer hastened to point out.

Who travels by private jet today? Certainly not the majority of potential customers of a large electric sedan in the 2030s. Especially as business jets are now (less than tomorrow?) in the crosshairs of environmentalists. So, should we, like Audi, think that the interior of a self-driving car should be similar to that of the first class of an aircraft? Or should we, like Peugeot, explode the boundaries and move into new worlds, closer to the codes of the habitat of the future?

Strictly in terms of design, Peugeot goes much further than Audi. Peugeot has created a dream car and, unlike those of the 1960s and 1970s in Italy, this one is completely credible. In terms of the definition of the control modules, the French manufacturer also offers a more futuristic vision, while remaining industrially feasible. As for the atmosphere on board, since the automobile is in the whirlwind of an accelerated transformation, that of the Inception Concept is obviously more avant-garde than that of the Grandsphere concept, while retaining the idea of controlled industrialisation by 2025-2026.

Audi may say that “unlike many electric cars, the Grandsphere concept does not look futuristic at all, but rather emphasises traditional ideals of beauty”, but one cannot help but write that it has been years since a Peugeot has checked out Audi’s futuristic vision of the premium segment. IN FACT, IT HAD NEVER HAPPENED.

Follow the daily news from the world of automotive design and discover the automotive archives on the LIGNES/auto Facebook page: https://www.facebook.com/lignesauto/ 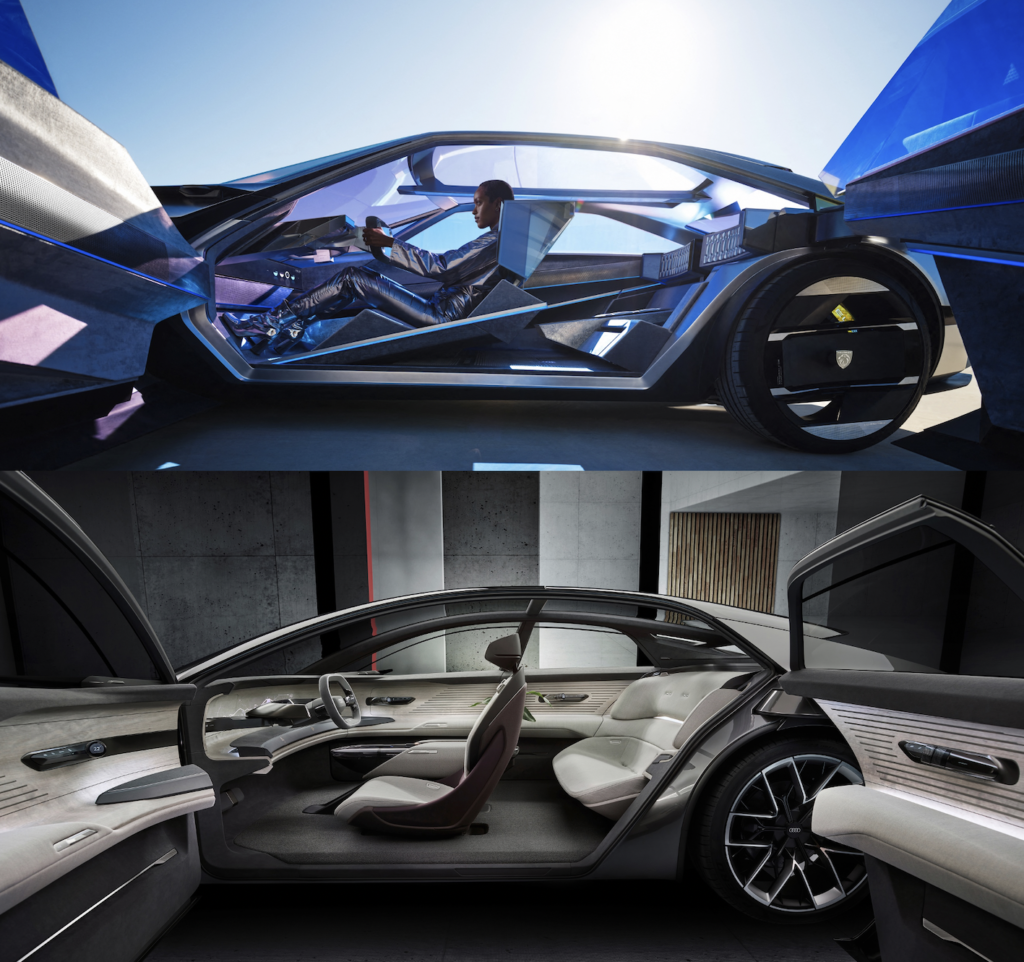