In the glove compartment of the DS E-TENSE PERFORMANCE, you might find a few sticks of dynamite. Because this very dynamic concept is explosively! Here is the new DS concept and first surprise, it rehabilitates the E-TENSE concept of 2016 by changing certainly much, while remaining largely identifiable. Strange for a concept car!

Recycling is a major trend, but we didn’t imagine it to be so! It must be said that this prototype wants to get a message across through its technical architecture rather than its design. Hence the name DS E-TENSE (2016) to which DS has added “Performance”. Moreover, it is not officially a concept car, it is a “very high performance laboratory”.

Its carbon body is reassuringly safe, as the car has two electric motors with a combined power of 815 bhp and, of course, four-wheel drive. This quest for power, coupled here with a new battery (designed in partnership with TotalEnergies), reminds us of the engineers who developed the “short” SM with its 340 bhp in the early 1970s (*), to test how far a traction car could go in terms of road holding. Different times, different customs, but the will is the same.

The work carried out with this prototype will serve the development of future 100% electric DS cars – from 2024 – in the same way that the work on the SM prototype has opened up innovative solutions for high-performance front wheel drive. This laboratory was designed entirely by DS Performance and is a concrete example of the link that exists between DS Performance on the Formula E World Championship track and the series. Thomas Chevaucher, Director of DS PERFORMANCE, explains that “the aim is to apply the experience we have gained in Formula E, and the expertise we have gained from our international titles, to a project that prefigures the high performance electric car of tomorrow. It is a laboratory that will be used to analyse the behaviour of the components and to develop them for future industrialisation. The idea is also to find solutions to reduce their costs, make them easier to manufacture and envisage applications in series production models. The next generations of the E-TENSE range will benefit from these developments.

From 2024 – eight years after the presentation of the first E-TENSE concept car – all new cars in the DS range will be electric. In terms of design, DS makes no mention of the previous 2016 concept, which served as the basis for the development of this prototype. The main lines of the 2016 coupe are still present, except for the front end and other details.

However, DS says that the styling of the new DS E-TENSE PERFORMANCE reveals clues to the style of future creations, notably through its front, which picks up on the themes of the 2020 DS ASL with an expressive surface in place of the grille. This treatment accompanies the DS Automobiles logo in a three-dimensional effect with a specific welcome sequence.

On both sides, new daytime running lights, designed with extreme finesse, give a beautiful scale to the whole made of 800 LEDs. Two cameras complete the visual identity of this laboratory, allowing the acquisition of useful data, among other things.

(*) In 1971, the Citroën design office shortened some SMs (see below). The first prototype measures 4.35 m instead of 4.89 m, and its 3-litre engine with four valves per cylinder develops 340 hp, for a top speed of 280 km/h in front wheel drive. The best known of these prototypes is the one painted in red, black and yellow that was tested on the Michelin tracks. And not only to develop traction with more than 340 bhp, but also to develop the anti-roll system which will be found in 1996 (!) under a different architecture with the Xantia V6 Activa. 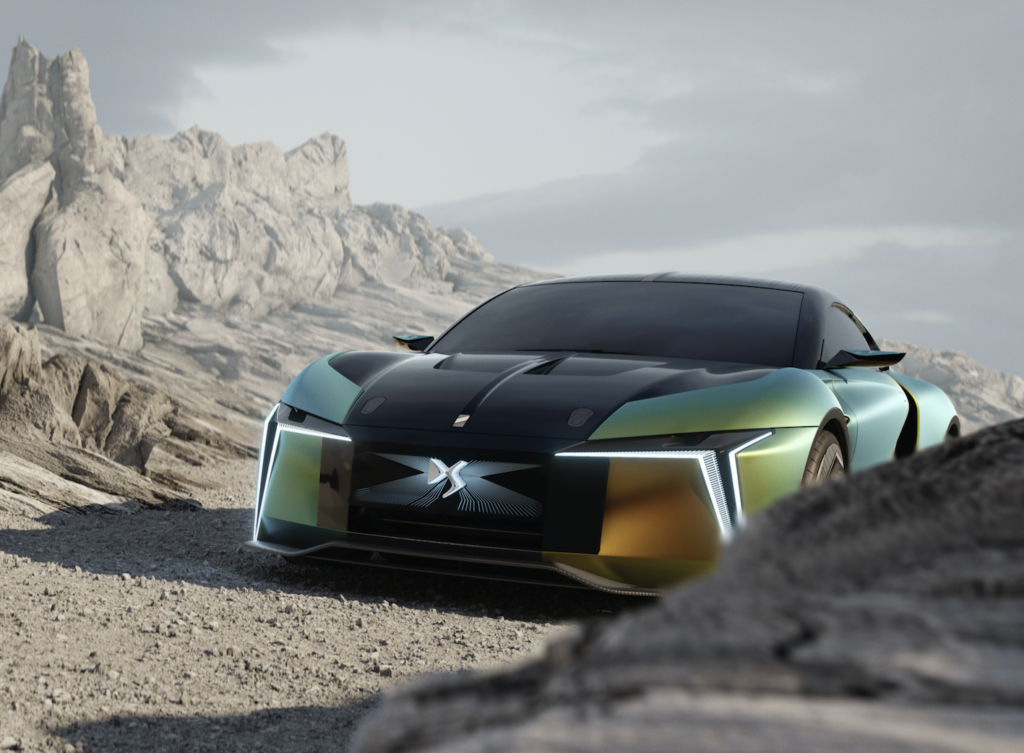