Robert Opron left us on 29 March 2021. Ironically, this painful anniversary coincides with the launch of the C5X saloon, a Citroën car with two mythical letters in its name that bring us closer to Robert Opron’s last creation for Citroën: the CX, presented in 1974. This is a perfect opportunity to compare the two Citroën’s large road cars marketed 48 years apart: one in the last millennium, the other a few days ago…

Below, you can see that in almost half a century, both cars still have four wheels, a sloping rear window, three side windows and the double chevron tattooed on their body and soul. Yet finding similarities in style is tricky. Your children may look the same, but by the time they’re 48, they won’t look much like their childhood photos. Let’s try this perilous and unpretentious exercise anyway.

In 2016, Citroën gave new hope for a new road car with the CXperience concept car. Its designer, Grégory Blanchet, who now works for Mercedes, immediately refers to the 1974 CX.

Below, the CX’s fairly vertical windscreen is contrasted with the C5X’s sloping ‘A’ pillar, but its voluminous front end is very vertical. The homologations imposed this architecture. If the bonnet of both cars goes down to the more generous logo on the C5X, the design of the front is quite different: composed of a large soft nose on the latest model, and designed with only a bumper, two headlights and a small grille on the CX. No longer are the flimsy strips that protect the sides, as on the CX, but solid plastic arches that wrap the wheel arches on the C5X.

Above, the side of the CX is sculpted in a single movement, in which the edge line splits into two elements that separate midway. The more complex C5X does not have the characteristic rear wheel arch of the 1970s Citroën. The almost flat bonnet of the CX contrasts with a shaped bonnet on the C5X. The large front wheels of the C5X fill the wings much more than those of the CX!

Above, the designer Frédéric Angibaud conceived the design of the C5X under the responsibility of Alexandre Malval and finalised the project under that of Pierre Leclercq. Clay (synthetic clay) is used here, whereas at the time of the design of the CX (project L), the material was plaster, see below in the then newly created workshop in the heart of the Vélizy design office, after the latter’s move from the rue du Théâtre to Paris in the late 1960s.

Below, the body ‘mass’ and the ratio of sheet metal to glass has changed between the two cars. However, the theme of the three side windows has been retained. For safety reasons, the C5X’s lights extend well beyond the sides of the car. Pierre Leclercq also explains that they allow the car to be visually wider from the rear. The wheelbase of the CX is longer than that of the C5X, while the latter is longer. The proportions are therefore more “Citroën” on the 1974 CX than on the new C5 X…

Above, this table shows all the descendants of the C5X. There have only been 7 sedans in the Citroën range since 1934. Therefore, a new car every 12 and a half years on average… The C5X has the length of a 1955 DS but its wheelbase is 34 cm shorter. Surprising considering the habitability of the two large saloons… Since the XM with its flush-mounted hubcaps and wedge-shaped line, no large Citroën has been able to do better in terms of Cx (0.28), not even the C5X, despite its imposing spoiler. All the great Citroën cars have existed in an estate or similar version (Commercial for the Traction) except two: the C6 which only existed as a saloon and the new C5X which takes advantage of its “dynamic estate” concept to be satisfied with a single silhouette.

The three headlights of the C5X below are offset as far outwards as possible, again with the aim of visually enlarging the car. The headlamp cover form is the opposite of the CX’s headlamp shape.

We are unforgivable: we forgot to ask Pierre Leclercq if the silk-screened decoration on the rear window of the C5X (below), voluntarily reminded us of the small bars found on the rear panel of the CX… Let’s not break our dreams and stay with the idea that it is!

Below, Robert Opron and his right-hand man Jean Giret had to abandon innovations such as the tailgate that Opron had imagined for a phase 2. The C5X was obviously equipped with this tailgate, which was not the case for the C5 and C6. Notice on the drawing the pencilled annotation to buy a… Total GTS 20-50 oil can! What did Mr Opron drive at that time? In an SM?

Below, the door handles of the C5X are not retractable. For the moment, these are reserved for the “premium” segment. Those of the CX were graphically much better worked, with this round embossing which is also found on board, in particular to house the window regulator handles.

Below, the two dashboards are, it should be remembered, almost half a century apart. Yet (but is this intentional?) the desire to exteriorise the side vents is identical. The steering wheel of the CX is single-spoke, while that of the C5X has three spokes, one of which is black lacquered at the base, reminiscent of the SM. The interior design of the CX was the responsibility of Michel Harmand, whose pupil was Alexandre Malval (former Citroën designer and author of the C5X’s styling theme). Michel Harmand designed very innovative “product design” door medallions. Unfortunately, plastic materials were not very attractive at the time.

Michel Harmand was also responsible for the design of the “lunule”, which brings together all the controls within easy reach of the driver’s fingers and all the lights. Today, these controls are grouped around the steering column or directly on the steering wheel. In 48 years, the layout of the air vents, the glove box, the console and the gear lever (which controls the BVA on the C5X) has not really changed… The revolution in screens has left aside the revolution in dashboard architecture…

The styling of the 1974 Citroën CX has often been compared with that of the 1970 GS. Both saloons were designed on the same theme, close to that of the BMC and BLMC saloon prototypes produced by Pininfarina in 1967 and 1968. Here’s another point in common between the C5X and the CX: the new large saloon of 2022 takes up the aesthetic theme of its little C4 sister, as can be guessed above: same facial identity, same theme for the design of the main headlights, same desire for three side windows, same enhanced stature and… identical door handles!

READ AGAIN OUR TOPIC ON THE ROBERT OPRON TRIBUTE EXHIBITION IN AMIENS HERE :

So what would Robert Opron have thought of the C5X? It would probably only have found favour in his eyes because it was different from other great cars. As for the rest, Robert Opron liked the simplicity of the volumes, supported by a line that was barely supported on the sides. As for the concave rear window (below, drawing by Opron), it is absent on the C5X, whereas Marc Pinson on the C6 and even Alexandre Malval on the C5, had rehabilitated it.

Watch our new video: “Citroën C5X: the heiress” where we talk about the C5X and its predecessors Traction, DS, CX, XM, C5 and C6. It’s here: https://www.youtube.com/watch?v=k7cAavdvxrA&t=70s 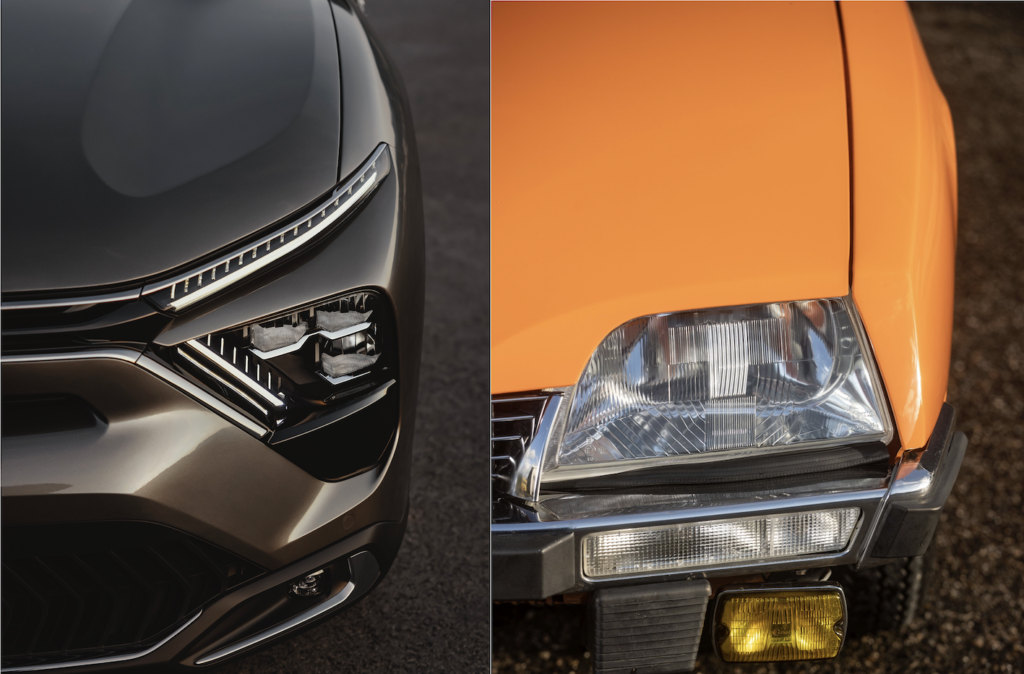