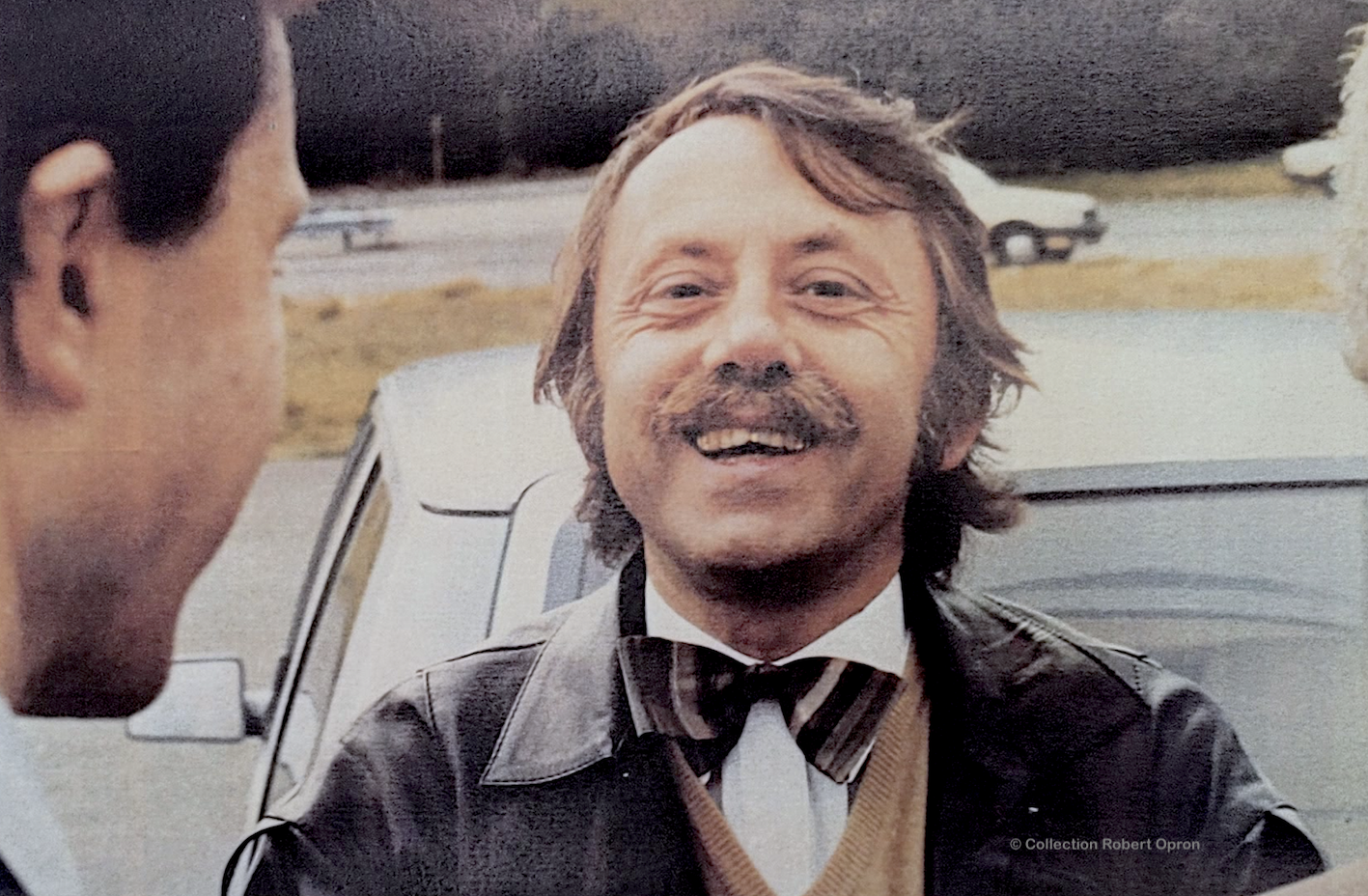 It is in Amiens, in Picardy – Robert Opron’s birthplace – that a tribute exhibition to the great designer who died last March (1932-2021) is currently being held. It brings together numerous unpublished documents collected by the organisers from Geneviève Opron, who was herself present on the day of the opening. LIGNES/auto was there…

It is – for the time being – the only public event that pays tribute to this great designer. This exhibition was originally the idea of enthusiasts grouped together in the association ‘L’tchiote auto 80’: Michel Lamy, the president and Francis Levant, Jean Gadenne and Alain Congretel, the latter a reader of the… LIGNES/auto quarterly.

How can we not salute their initiative? But a confused feeling comes over us when we leave this superb exhibition, when we realise that a tribute worthy of this designer was born from this small team of enthusiasts: wasn’t it up to the manufacturer to organise such an event? Design, or even “style”, is still a matter for men and women, isn’t it? Knowing that this exhibition is the brainchild of a handful of enthusiasts but nobody from Citroën leaves a bitter taste. Opron, it’s still the GS (car of the year below), the SM, the CX and so many other projects!

In its project, the small team managed to convince the city of Amiens, but not only. The president of the Maison de l’Architecture, Jean Louis Maniaque, the video artist Rémi Blondel, Guillaume Vinchon, the administrator of the Maison de l’Architecture, and Gauthier Gillmann of the Musée de Picardie, the curator of the exhibition, were also there.

In the different rooms of the exhibition, you will go back in time with the periods that Robert Opron lived at Simca, Arthur Martin, Citroën, Renault or even Alfa and Ligier. All this is enamelled with documents, often unpublished, most of which come from Robert Opron’s personal archives, lent for the occasion by his wife Geneviève.

On Saturday 4 September, during the opening of the exhibition, Mrs Geneviève Opron, above, was presented with the town medal by the Mayor, Mrs Brigitte Fouré. She was surrounded by about fifteen members of her family. Among them, the great-grandson of Robert Opron, now a student in Amiens.

Dive into the heart of this exhibition with us with some of the nuggets on display. Let’s start with the Simca period. Opron was just 26 years old when he walked through the doors of this design office…

Of course, everyone thinks of his show car: the 1959 Fulgur made at the request… of the Tintin newspaper! But the Simca period was also the occasion for Robert Opron to establish real professional relationships with some of the designers or modellers who were to follow him to Citroën, such as Jacques Charreton and Basile Allamat.

Long before Simca created the 1100 with its hatchback – this was in 1967 and Robert Opron had left the company five years earlier… – the French designer was to innovate with this two-body model from which the compact Simca was obviously inspired, above.

Then two large display cases show sketches by Robert Opron, made during his period at Arthur Martin, where he joined after two years at Simca. The car manufacturer asserted its right of non-competition. At Arthur Martin, Robert Opron became the company’s style director.

Numerous sketches from different eras are scattered throughout the exhibition, such as the piano below, which immediately made us think of the Pleyel piano designed by Peugeot Design Lab in 2012. Not necessarily in the form, of course, but in the way of approaching this new universe with the spirit of “designer”.

You can see above two models of the AP project, which later evolved into the famous F project, where the idea was to design an intermediate vehicle between the 2CV and the DS…

At Citroën, alongside Flaminio Bertoni, Robert Opron did not hide his love for the DS, without forgetting to add that he did not like the Ami 6 created by the Italian. When the latter died in February 1964, he took over the management of the small design team. He could count on it, as always, with Michel Harmand, Jacques Charreton, Henri Dargent and Jean Giret as pillars.

Projects that broke the codes of 1960s-1970s automobile architecture were to proliferate in the style offices in the rue du Théâtre, near Javel, and then in the vast premises in Vélizy at the turning point between the 1960s and 1970s.

In 1964, when Flaminio Bertoni died, Opron’s role changed but the team was still very small and the “boss” did not hesitate to put his own ideas on paper. They were sometimes sublimely put into volumes by Jean Giret.

The adventure with Citroën lasted from 1962 to the end of 1974. That year, Bernard Hanon – the future boss of the Régie – hired him after seeing the Citroën CX at the 1974 Paris Motor Show. Robert Opron, who did not want to live through the arrival of Peugeot, the great rival of all time, left his favourite brand without regret to take up a new post at Renault.

It arrives in full development of the VBG program of the Low Range Vehicles. He participates fully in the creation of countless models with original solutions, such as circular windows on the front doors or a vertical rear window taking up the entire height of the body side below. One can feel that the projects of small Citroën are still in him and he hopes that the Régie will be able to implement his ideas for Renault. But it won’t be the case.

At Renault, he deploys the strategy of collaboration with designers from outside the brand. Gaston Juchet had brought Giugiaro, Opron will complete the external contributors to further boost his teams. At the time of renewing the R5, Renault hesitated (below, Gaston Juchet’s proposal) and it was finally Marcello Gandini’s model that was chosen for this project 140. Robert Opron was surrounded by design giants such as Gaston Juchet, Michel Jardin, Marc Deschamps and Jean-François Venet.

Among the programmes he followed at Renault, that of the R25 allowed the company to re-establish itself in the top-of-the-range car market. This project saw a close competition between Gaston Juchet’s proposal and that of Jean-François Venet. The former won the bid, but Robert Opron was no longer in business…

He had just learned that his project to set up a design office in the United States had been halted. The Régie’s coffers were empty, the CEO Bernard Hanon was replaced by Georges Besse, and Robert Opron left the manufacturer on 8 January 1986.

He then joined the Fiat group in Italy where he pushed young talents to express themselves without filters. The result? The famous Alfa Romeo SZ below. The adventure lasted four years at Fiat and then Robert Opron created his own design office. He will work for Ligier and its no-licence cars.

But even in retirement, Opron is still putting his ideas on paper, and not all of them concern cars. Below, you can see a sports shoe with heel suspension or a ring covering two fingers…

The DS obviously remained in his heart and he never stopped trying to find a successor, as here with his design of the C7 called Rebelle. A man from the north, quiet but active in the shadows, Robert Opron did not get the recognition his talent deserved from the general public. So, yes, there have been hiccups in his career (his departure from Renault in particular), yes, he sometimes abused his position to defend his ideas, or even certain partners, but he remains one of the rare designers to have signed – or led the teams that signed – major projects for the two main French manufacturers at the time… Few designers can boast this.

Thanks to the volunteers and actors of the setting up of this exhibition, starting with the curator Gauthier Gillmann, but also the whole friendly team of the Maison de l’Architecture des Hauts de France, an old forge superbly restored. Thanks also to Juliette Charlot, Alicia Teihoarii and Lucile Prudenzano for the communication.