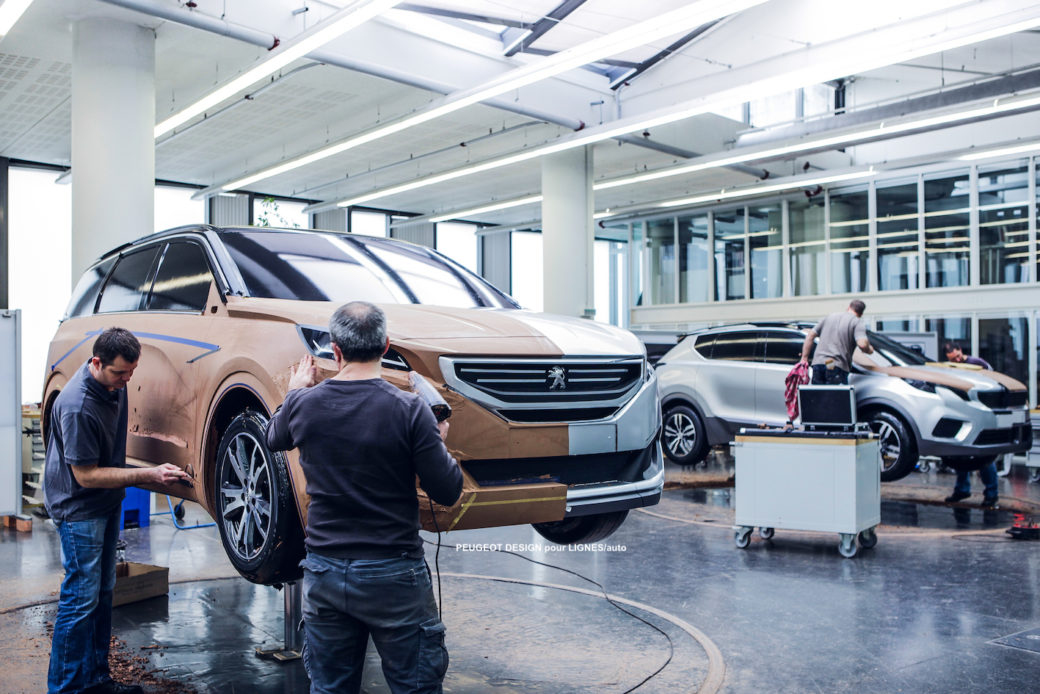 Fifty years ago, in 1969, Harley Earl left us. For design lovers, this genius is at the origin of many evolutions of the automotive design universe we know today.

First to work so that women could work on design, first to imagine a concept car with the Y-Job, he was above all the first to integrate a new material into a stylish studio : the clay…

LIGNES/auto offers you a stroll in secret places : physical modeling rooms, those where 3D digitization screens mix with a little-known art. It is time to pay tribute to this material and the women and men who work with it on a daily basis !

1/1 SCALE CLAY MODEL
The 1/1 scale clay model, which perfectly complements the 3D digital modeling, remains the only support from which the various departments of the automotive groups make their decisions. This model becomes the “referent”.

This bivalence between the digital and the physical will therefore always be necessary. The difficulty for manufacturers has been to develop teams dedicated to digital technology while keeping the masters of sculpture on the physical modeling. And make sure to obtain teams on both sides with variable geometry according to the progress of the project.

While digital technology has obviously saved time, it has required a total restructuring of the design studios of all the automotive giants. Some time ago at Renault, we were told that with the process set up at the beginning of the 2000s, the hours spent on a digital project represented only 12% of the hours spent on the physical models. Today, the percentage has completely reversed with proportions in the order of 60 to 70% in digital against 30 to 40% in physics.

This evolution has brought many changes in the very structures of design offices where digital modelers now outnumber physical modelers. During the development of a project, the phase where the physical modeller is needed is smaller, but builders cannot do without the expertise of these teams who sculpt the three dimensions to offer it all the emotion necessary to choose the style, or even the direction…

The “all-digital” is a permanent fact. With this organization of design offices, each project is designed with a considerable time saving compared to the developments of the 1990s. The manufacturer can then move towards a diversification of the ranges even if some (such as the PSA group) try to limit the silhouettes. But this time saving, necessary to face global competition, is also a financial gain, quite simply. At the beginning of the 2010’s, the gain could be estimated at 50% for the development compared to the beginning of the 2000s.

Our purpose is not to question digital development, of course ! Thanks to it, it is possible to create, from the beginning of the project, extremely detailed proposals, right down to the inside of the optics, which is digitized. And this, without any physical model having been made. At this stage, at a very early stage of development, scale 1 models in white foam above (polystyrene in particular) are often used to measure masses and volumes, more than details. Digital must be used at the right time, for the right purpose. And the computing power corresponds to the calculation of a Disney animation movie designed… once a month ! But the big disadvantage of digital is that it does not allow us to see the masses. Hence the importance of this irreplaceable modeling stage. And for all periods (below)

THE CLAY MODEL
In concrete terms, a clay model looks like a honeycomb and aluminium structure (other materials can be used, such as… wood) with a final shape, minus two centimetres. It is then covered with clay breads five centimetres thick. This is the so-called “massage” operation : the clay is heated and massaged to roughly cover the shape by proposing an excess thickness. The model then goes to the milling machine which, thanks to the readings made on the digital models, produces the almost final shape. Depending on the type of milling, the operation can be carried out in one night or can take up to three days.

THE MODEL MAKERS
It is then that the team of three or four model makers invests the model to bring its know-how, give a quality to the form and especially, make it evolve according to the demands of style, or technical convergences. The team can work for up to three months on the same model, a model that moves a lot despite its nearly two tons… As for the quantity of clay used each year by a large automotive group, it is almost 90 tons (Ford figure).

CLAY
If the 3D digital modeler is not necessarily titillated by the sensuality of his keyboard (!), the physical modeler has a very particular relationship with the clay. Like a sculptor…. This relationship with the material varies from one manufacturer to another because the technique used is not the same in all design offices. At Nissan in the early 2010’s, the clay was not heated and the work was therefore different. At Renault, as at most automakers, the clay is heated and, above all, less greasy.

The clay provides very different olfactory sensations from one type to another. It can even vary in color. When Antony Grade arrived in Russia on behalf of Renault, he remembers a very black clay, not easy to handle. But whatever its texture, clay gives a certain pleasure to be mastered. We’ve all made plasticine objects !

Clay is in any case more pleasant to work with than plaster, which has made quite a resistance in France and especially in Italy. The last plaster model at Pininfarina was the one of the “Osée” project, in 2001 (below). At Renault, it was the Ludo concept car. Plaster disappeared from Renault design studios in 1990, when Patrick Le Quément imposed the clay.

But the clay does not only have advantages. It works a lot and it is not easy to keep a clay model for very long. It also remains quite tender, so it is not advisable to rely on it, at the risk of distorting the style ! And then the clay can generate “bubbles” with which it is necessary to fight because, at some manufacturers, the models can be painted directly after spraying a polyurethane film and thus, pass to the drying oven !

THE DYNOC
To give a clay model a real body look, it is covered with a film called Dynoc. It is a self-adhesive coating available in rolls, like wallpaper, which can be soaked in water at 60°.

It is positioned with a spatula, after carefully eliminating the bubbles and it allows to quickly judge the lines of light.

THE TOOLS
Obviously, a good sculptor, a good modeler is nothing without good tools. They are sometimes disarmingly simple, like a simple knife (“the model maker’s pencil”). They have sometimes been designed for a particular task, but even more than the tools, it is the eye of the model maker that prevails. Hands do what the eye wants ! The tools are those generally used in the world of sculpture, such as “mirettes”. But there are also specific tools, such as rules or without teeth, that are used to shape volumes.

Because in cars you never accept a dish, there is always a minimum volume. The foils have almost as many shapes as there are volumes : concave, convex, short, recessed… These rulers can be slightly bent to draw the volume. Each modeler has his own tool case, in which he slips his rulers, knife, rags and a small brush. To scrape the clay ? Yes, the one that stays stuck under the shoes !