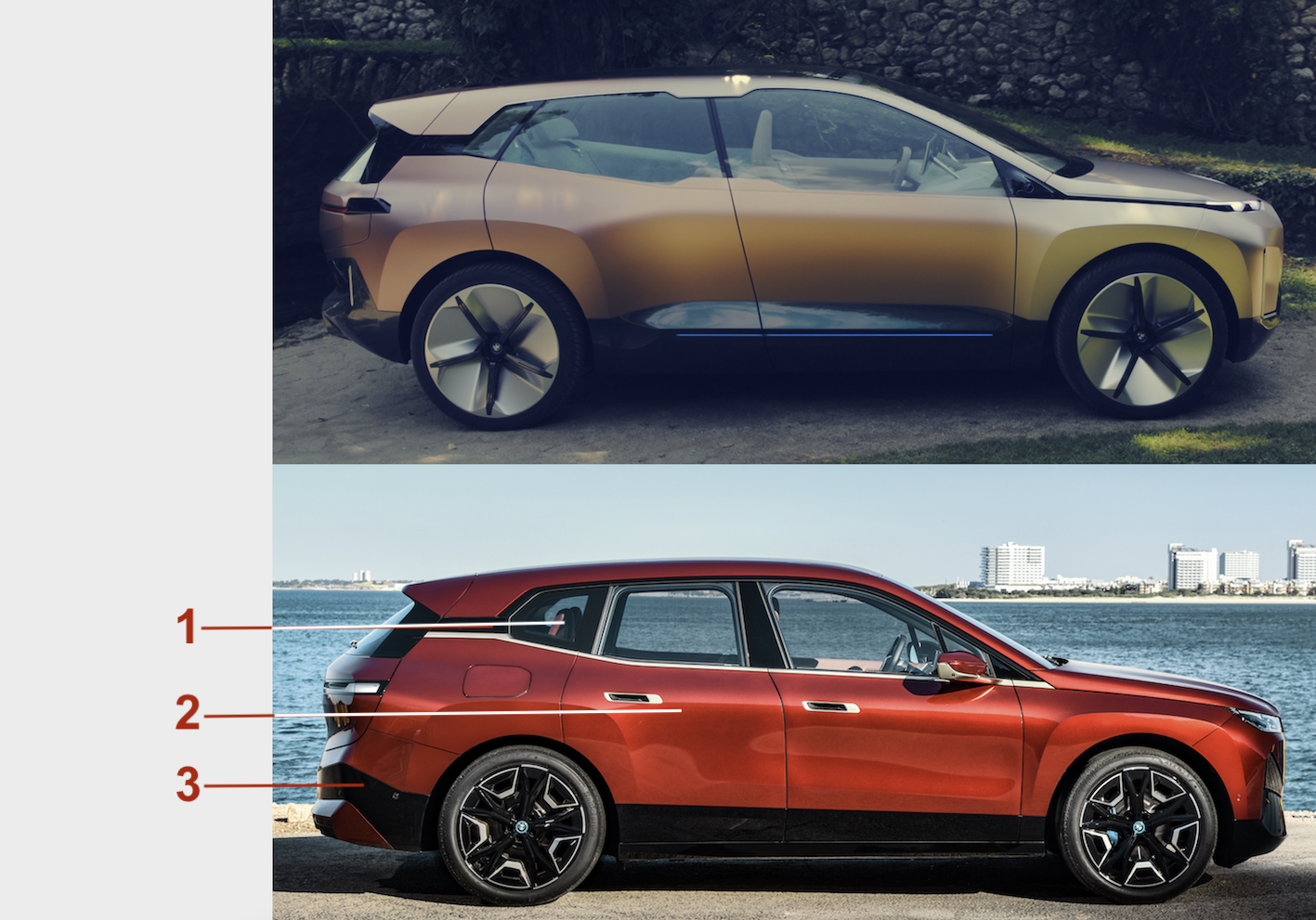 BMW has revealed the final version of its 100% electric SAV (Sport Activity Vehicle) which will be marketed at the end of next year. This vehicle has the size of an X5, the height of an X6 and rests on wheels as big as those of the X7. The first impression is rather positive, with a minimalist design, dixit BMW. The size seems contained and the production model is close to the concept car.

Before diving into a superficial style analysis, based on photos but not without meaning, let’s specify that this newcomer in the BMW i family will have four wheel drive, a power of 500 HP, a rather attractive range of nearly 600 km and a 0 to 100 km/h in less than 5 seconds. In addition to this advanced powertrain, the BMW iX also makes use of the latest innovations in the fields of electrification, automated driving and connectivity.

Less imposing than one might think, the iX adopts an evolved BMW formal language that also takes up some well-known themes, as we’ll see when we compare it to the 2018 concept car.

The standard iX differs mainly from the concept car by its completely different mass balance (above). The concept, with its sloping windscreen and rearward-facing interior, appears more dynamic. The production car has a rear door with relatively small glazing (2), which also imposes a third, very generous window (1). As for the rear overhang, it is naturally larger on the standard vehicle (3).

On the other hand, the new BMW identity that appeared on the concept is completely preserved. We can nevertheless guess a much more sculpted bonnet (1), a grille that seems to have moved up on the bonnet (the headlights are probably lowered a little…), while to break the height, the bottom of the bumper of the production car is painted black over the whole width of the vehicle (3). The front grille is completely hidden. Its role has become “digital” and it works like an intelligence panel by integrating the driver assistance systems. It has reinvented itself as an innovative and multifunctional high-tech interface.

The headlamps and tail lights are the slimmest ever fitted to a BMW. This design is possible with today’s available technology. This was not the case for the Opel Calibra and Citroën XM of the end of the 1980’s, which nevertheless dared to offer thin headlamps as well…

From this angle, above, it is impossible not to think of an Audi, or even… a Citroën C4 Grand Tourer! The tailgate is therefore autoclavable and covers the side of the body, as on the concept. From this angle, there are many similarities with the concept: rear hatch cover (3), black quarter panel trim to separate the roof from the body side (1), extremely thin lights (2), diffuser design and bumper (4).

The above doors obviously do not have the same kinematics. The rear doors of the concept car open in opposite directions and the side panels do not have a central pillar. A more classical architecture is standard. Note that the side windows are frameless as standard.

Also on board is the two-tone seat theme (above), a theme that differentiated the colours of the front seats from those of the rear seats in the concept car. A theme already seen on the Peugeot HX1 concept car (here : http://lignesauto.fr/?p=4435)

“The BMW Group is constantly striving to reinvent itself. This is a central element of our corporate strategy“, says Oliver Zipse, Chairman of the Board of Directors of BMW AG. “The BMW iX expresses this approach in a highly concentrated form.” It is in any case a radical approach, especially on board, where BMW’s sporting spirit gives way to a user-friendliness that is more in keeping with the very generous interior volume. And this, as on all electric cars with a dedicated platform.

“The BMW iX shows how we can give new technologies a very modern and emotionally engaging design. The car is technologically very complex, but it looks very clear and simple,” says Adrian van Hooydonk, Senior Vice President of the BMW Design Group (below, driving the model). “The BMW iX offers an important living space where people will feel comfortable and where the car’s intelligence will always be available without becoming intrusive“.