For 70 years, Volkswagen has had its head in the clouds and has been designing discoverable vehicles, all of them original ! Eberhard Kittler, director of the Volkswagen AutoMuseum in Wolfsburg, recalls a few glorious hours of these special machines.
Where we realize that 4X4 or SUV already rhymed with convertible….

At VW, engineers and stylists had many ideas concerning buggies and many concepts or prototypes were studied, starting with the Beetle Convertible, developed by Karmann in Osnabrück, then produced under a Volkswagen license from 1949 to 1980. The result : more than 330,000 units. Hebmüller produces 695 units of the Schoenlinge, a two-seater convertible. This small quantity is mainly due to the fire that destroyed the Wülfrath factory near Wuppertal in 1953. But on the basis of the Volkswagen “Beetle”, dozens of very small series and unique models were produced worldwide until the 1980s.

The uncompromising “Dune” buggies, or the “Baja” buggies, were born in California. Only a few models of the Baja, which would have driven all current approval officials crazy, ventured out into the streets, out of the dunes… Since the mid-1960s, at least two dozen European bodybuilders have been involved in the production of such variants. Like Karmann in Osnabrück.

Volkswagen, on the other hand, took its share of the cake with the Type 181 offered from 1969 onwards. This VW was probably the first crossover model in the brand’s history. Its image has been forged thanks to its five seats with a foldable windscreen. In the United States, it has been nicknamed “The Thing”. With the Combi, it perfectly illustrates the hippie era. And in Bali, where Type 181 was assembled for some time, it is still used today as a tourist shuttle. In total, about 140,000 cars were built.

The four-wheel drive type 183 (Iltis) was based on a military vehicle platform from Ingolstadt and had been converted into a rather fast crossing device ! His career was crowned by his magnificent victory at the Paris-Dakar Rally in 1980. More than 10,000 vehicles have been delivered.

But Volkswagen also offered this pleasure of escape in the Golf format with first of all the 1979 convertible but there was also an open-top version of the Golf, the Passo, which remains largely unknown today. It was created in cooperation with the company ACM / Biagini near Pescara on the Adriatic coast.

From 1990 to 1993, about 300 four-wheel drive Golf Country models were converted to convertibles. While about 50 of these models have entered Germany, many have been rusted, so far from Italy’s mild weather conditions. In 2016, the convertible “Beetle Dune” was unveiled and remains a classic today: elevated suspension thanks to the so-called “heavy-duty” chassis, 18-inch wheels, with flashy accessories, in bright colours. She wanted to be a legitimate descendant of the Baja for Central Europe.

In March 2016 in Geneva, the T-Cross Breeze sconcept car seems to be a synthesis of all the ideas and experiences of these ancestors, totally anchored in the history of the German brand. This T-Cross Breeze can in turn be considered as the ancestor of the new T-Roc convertible that will replace the Golf convertible in 2020 on our roads. Should we be pleased about this?

LIGNES/auto takes you for a ride in the unforgettable “buggy”.

Here is the discoverable VW T-Roc of 2020 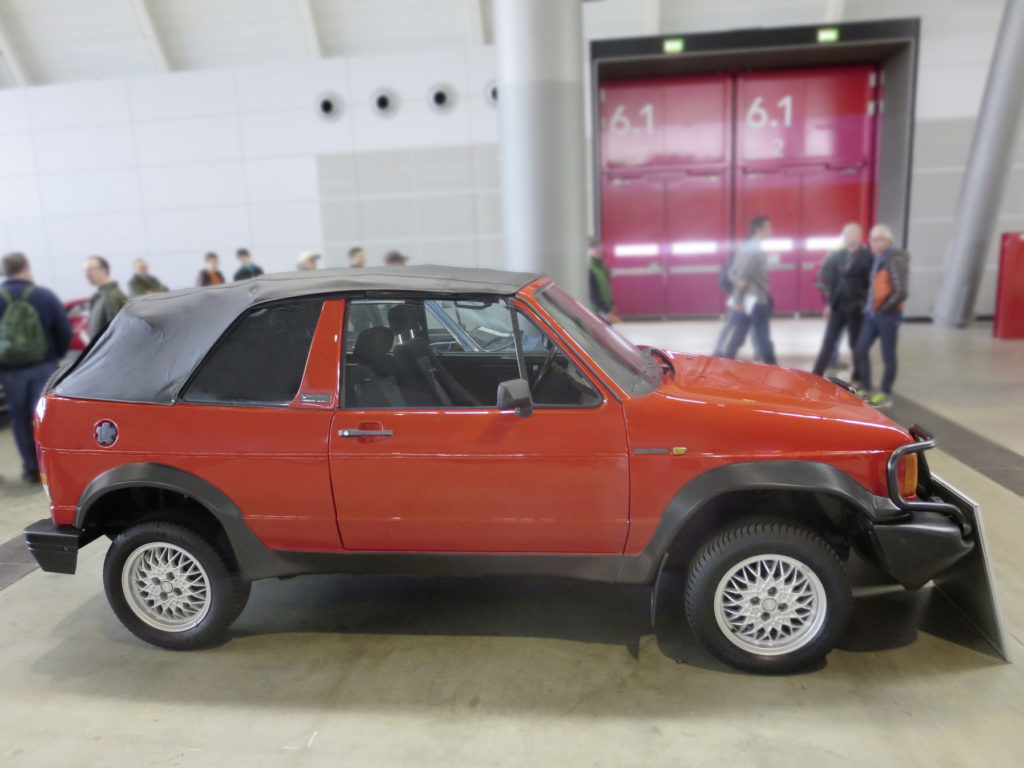