While Renault is reinventing the R4, which will go on sale in 2025, 40 years ago, in 1982, Marcello Gandini designed a new R4 at the request of Renault.

Marcello Gandini designed unforgettable concept cars, such as the Alfa Romeo 33 Carabo. But he also designed the Lamborghini Miura and… the Citroën BX, the Renault Supercinq and a project for the succession of the 4L, whose very chaotic history follows.

When Marcello Gandini left Carrozzeria Bertone in 1979, his successor Marc Deschamps explained that the Italian master designer wanted to work with a major manufacturer. In fact, at the end of the 1970s, Gandini established a privileged consultancy relationship with what is still known as the Régie Nationale des Usines Renault. This alliance with one of the most renowned designers in the world of “automobile fashion designers”, gave birth to projects that were far ahead of their time, such as the Renault AE truck of 1990 (pre-phase drawing below: Car Design Archives) which was produced in France for more than twenty years, without ever taking on a wrinkle, or the project to renew the R5 with the Supercinq project.

But Marcello Gandini’s avant-garde ideas proposed at Renault are like water and oil: not very miscible! Thus the idea of an all-plastic, orange and red car, the Picola, which the maestro brought to the design office in a wooden crate to assemble in less than an hour with three times as few tools. It is as much to say that the Régie’s managers immediately bought the concept so that it would not have to be produced – the factories would have had to be demolished! – and above all, to prevent it from falling into the hands of competitors…

At the same time as the programme to renew the Renault 5, which led to the presentation of the Supercinq in 1984, Marcello Gandini worked for Renault on the various projects of the gigantic VBG plan – Véhicules Bas de Gamme – which the company had initiated in 1973, one year after the marketing of the R5. The objective of this titanic programme was to open up new horizons for an intelligent little Renault, capable of replacing the R4/R6 duo. Above all, the VBG programme had to take the concept of an R5, which was certainly very attractive, to its limits, but which was based on outdated technical elements borrowed from the ageing R4. The original specifications can be summed up in two sentences: “the vehicle must not pay the price of aesthetics” and “the vehicle must first of all be defined by its uses”.

Finally heckled by the success of the R5, which Renault did not dare touch for fear of breaking an incredible dynamic, the VBG programme was close to implosion: its specifications were constantly being modified. The first models made in the middle of the 1970’s were extremely interesting but they were based on a costly technical base because they required a new three cylinder engine that was far ahead of its time and new running gear.

And as the R5 was a golden goose, why break with it by imagining a vehicle that was very expensive to design and produce? However, in 1976, while Renault was preparing the marketing of its R14, which was also very much ahead of its time (Gandini had nothing to do with it, we owe its style to Robert Broyer), the management of the Régie went to its secret bases in Lardy near Paris to discover an impressive number of models of the VBG programme. It was the proposal of the stylist Jacques Nocher (below) that was selected to go through to the rolling prototype. A prototype that the auto-journal photographed in 1979 with the headline “Here is the future Renault 2”, creating confusion, as Nocher’s Renault was larger than the R5 and had no ambition to become a “small” Renault 2. But the VBG programme was too costly and was put on hold for a long time. It was relaunched in 1981.

At that time, the Renault 5 finally received two extra doors and the Renault 4 celebrated its twentieth anniversary. Renault was well aware that it had to look further ahead and finally design a successor to its “4L”. In May 1982, we find Marcello Gandini working on this new study (the “Z” project). Numerous proposals flourished, reminiscent of the crazy hours at the beginning of the VBG programme in the 1970s.

But, entangled in a catastrophic financial situation, Renault was obliged to stop these numerous projects in 1985, to finally retain only two: the future Renault X-57 which was to give birth to the replacement of the Supercinq (it was to be the Clio of 1990) and the future Renault X-45 which was to give life to the successor of the Renault 4. It took a decade since the launch of the VBG programme for Renault to finally offer it a reliable course that would fit perfectly into a product development logic.

If the X-57 project for the Clio “escapes” Marcello Gandini (he learns that Giorgetto Giugiaro was consulted for this programme, above model on the right, without more success), his model of the future Renault 4 (project X-45) fully seduces the management. But there was a lot of competition for this programme: Renault styling produced its own models, notably with a proposal from the designer Alain Jan, and Matra, which had just launched production of the Espace, was invited to the party. It was also a period when a cultural revolution was taking place at the Renault styling centre with the first works directly from the computer. The future Renault 4 (X-45) is presented as a fairly cubic saloon with a length of 3.54 m (3.65 m for the 1961 R4), fairly wide (1.57 m) and reasonably high (1.48 m).

Marcello Gandini gave it a pinched front end with a design of the front wings which largely overflowed the black grille. The Italian proposal is very modern if one wants to put it in context: Renault has just marketed its more urban and less rustic Supercinq, Citroën has not yet unveiled its AX and Peugeot has clearly gentrified its entry-level offer with its 205 which is not yet two years old. But how much weight can originality, even if it is signed by Gandini, have in the face of decline? Renault was on the brink of the abyss with an abysmal deficit. Edith Cresson, then head of Matignon, put pressure on Bernard Hanon (below on the right with Gaston Juchet), the boss of the Régie Nationale des Usines Renault, to… hasten his departure. Even the President of the Republic, François Mitterrand, makes a little assassinating remark: “there is a serious Renault problem to which we must respond in the next few days”.

On 23 January 1985 – at the same time as the launch of the X-45 project… – the Council of Ministers appointed Georges Besse, until then CEO of Pechiney, as Chairman of the Board of Directors of Régie Renault to replace Bernard Hanon, whose departure had only been announced on the 21st. The “serious problem”, to use the words of the Head of State on 16 January, was financial: the Régie’s losses for 1984 would be between 8 and 10 billion francs.

The models of the future R4 programme (above in the 3-door version) perfectly meet the specifications established in 1973 when the VBG plan was launched: “the vehicle must not pay the price of aesthetics” and “the vehicle must first be defined by its uses”. But as perfect as they were, these proposals were put to rest by Georges Besse. The possibility of replacing the R4 was definitely over. Until the arrival of Luca de Meo at the head of Renault and his Ampère programme, which brings together the 100% electric Renaults: the Mégane E-Tech, the future R5, the family Scénic and finally, the two silhouettes of an R4 reinterpreted as a small urban SUV and a van utility vehicle (below).

Gaston Juchet, Renault’s head of styling at the time of the sprawling VBG project, gave his somewhat disillusioned view of the VBG project: “How is it that after so many studies and proposals for small vehicles, what we have long called the ‘new R4’ has not emerged? Did the 2CV and R4 simply benefit from the very special conditions of absence of cars during the war years? How could the stereotypical ingredients of the classic tourer, steeped in speed, luxurious comfort, over-equipment and often aggressive social ostentation, be abandoned in favour of other values that this programme represented? Yet it gave birth to cars that were practical, not very vulnerable, economical, discreet in the environment, but also pleasant and playful, capable like the Blue-Jean of crossing social strata, years and continents!

Marcello Gandini, whose inspiration Renault had loved so much, was overtaken at the very heart of the Régie Nationale’s styling by Giorgetto Giugiaro, who was retained for the styling of the 1986 Renault 21 and designed the 1988 R19. And the Renault 4 disappeared at the beginning of the 1990s. Its electric successor, such as the Phoenix, is expected in 2025. The story is therefore still unfolding, much to the delight of the fans of this popular R4. But without Gandini this time…

Text by the author published in the July 2018 issue of Gazoline magazine. 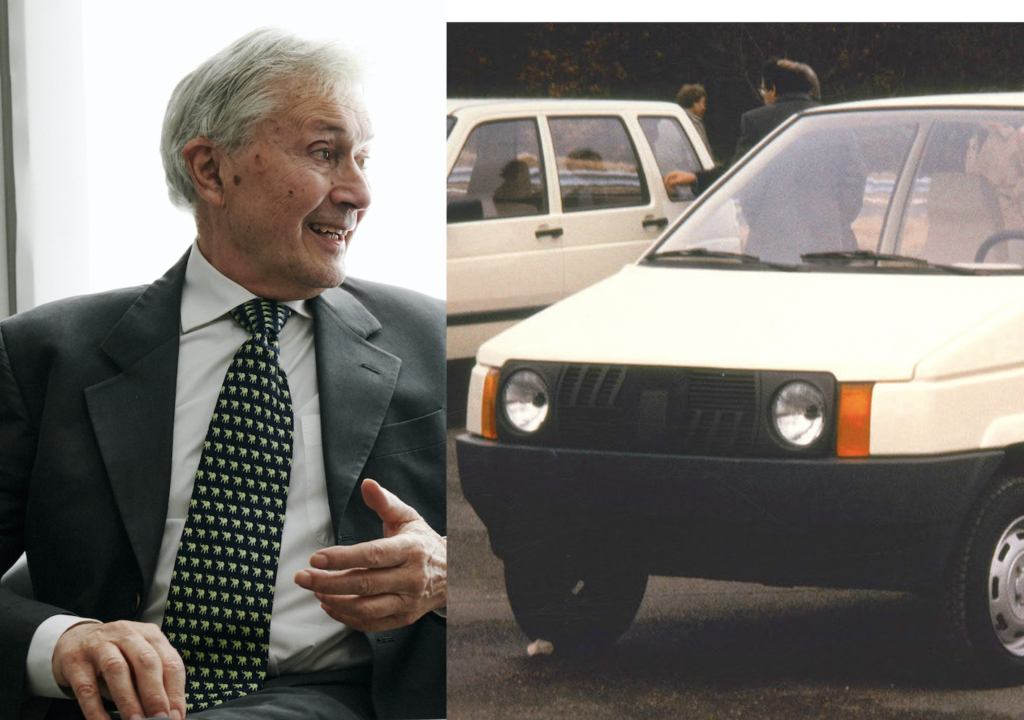