With the arrival of Matthias Hossann at the head of Peugeot design, we spoke to him (http://lignesauto.fr/?p=19032) about the fabulous e-Legend concept car for 2018. At the time, we met its designer, Nicolas Brissonneau… Go back to this exciting meeting.

Nicolas Brissonneau:
“It’s fantastic for us to be able to reach out to the public with very strong, very identity-focused proposals. »

“For this study – which gave rise to the e-LEGEND concept – we took a completely different approach to a traditional concept car. We always use it as a laboratory, but here we have worked to sign a vehicle that is deeply inspired by an icon, the Peugeot 504 coupé. The Peugeot e-LEGEND has incredible proportions, slender sides like those of a cat, a bouncy, athletic look. It has a nervous stern. These are immutable codes, the DNA borrowed from our history. These are very elegant proportions.“

Nicolas Brissonneau is now in charge of Peugeot’s exterior artistic design and is the author of the exterior design of e-LEGEND.
“I coach different exterior design projects and I am the designer in charge of the exterior design for this e-LEGEND concept. It so happens that I have taken over the position of exterior designer for e-LEGEND because this car carries extremely Peugeot codes, a little like what we produced with the SR1 concept car inspired by the 406 coupé. It is obvious that our past helps us to envisage our future by reinventing ourselves each time. My job is quite cross-functional within Peugeot design and, with Gilles Vidal (who left his post on 28 July 2020) and Matthias Hossann – the new Peugeot design director (below with Nicolas Brissonneau) – together with all the team’s creative staff, we are helping to build Peugeot’s future identity.” 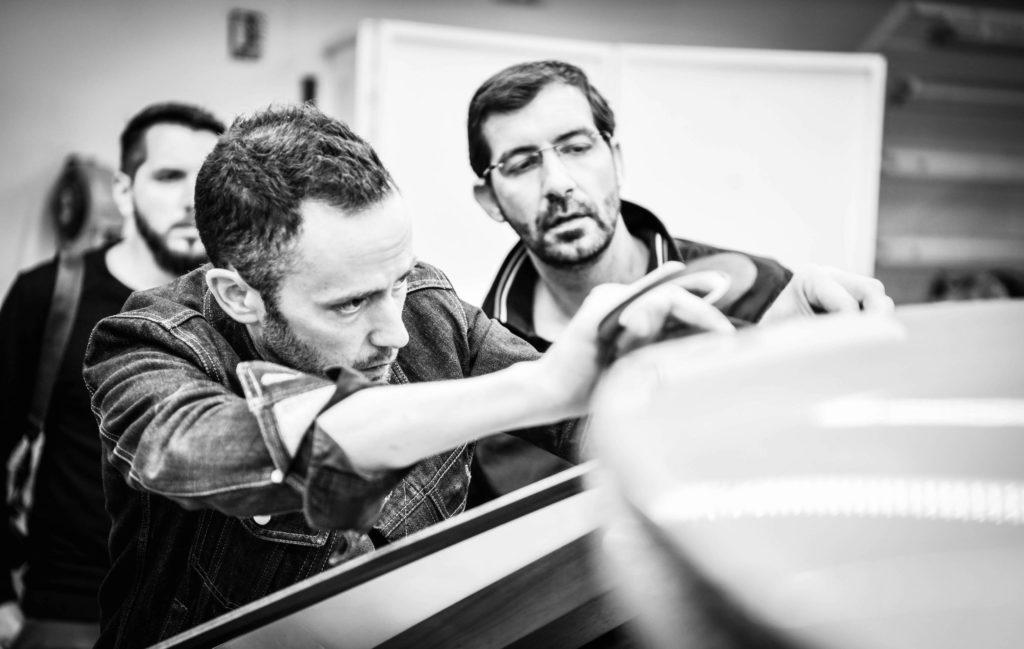 Matthias Hossann on the left, Peugeot Design Director since 27 July 2020, with Nicolas Brissonneau.

LIGNES/auto: A brand’s identity is certainly important, but it gets old quickly!
“The rule is generally to renew the whole range with a new identity before moving on to something else. It turns out that by definition, identity is renewable. The world around us is also changing rapidly, so we can’t stay stuck in one era. We have to know how to reinvent ourselves, how to regenerate ourselves! “

Do concept cars help you in this process?
“We’ve had strong periods – like with the Onyx concept car – that have allowed us to reinvent ourselves. Onyx was born out of a “guided” creativity, because this copper and black concept car comes from an inspiration at the sight of an object that takes up this chromatic theme. Creativity can be guided by strong images. There are many ways to create but overall, one starts more often from the blank page, it’s instinctive. The rest comes with experience. As for taking inspiration from competitors, it never goes very far!”

Onyx (above) thus marks a break in the search for the Peugeot identity?
“Before Onyx, we had the SR1 concept (below), a manifesto that anticipated the codes of the 208 that appeared in 2012. But we continue to evolve constantly, as you can see with our new 508, which embodies the themes seen on the Instinct concept car. It’s fantastic for us to be able to reach out to the public with very strong, very identity-focused proposals.”

Changing an identity isn’t just about changing a grille or a look?
“Not necessarily. There are fundamentals that remain and remain intact over time. This is indeed the case for the look, even if technology evolves. The look of our products remains strong, you can almost talk to each other with a Peugeot look! It’s a feline look. But it’s not the only one. We also have our strong bonnets, the rear lights with their claws. These are constants that we are developing to keep pace with the evolution of technology.
The eyes of cars are no longer their optics. Because the optics, especially on e-LEGEND, now incorporate some of the technology used in driving aids.”

However, the e-LEGEND concept is clearly in line with the look of the 504 coupé!
“We have worked a lot on the concept’s optics and its look is a part of the ADAS. The work is indeed inspired by the 504 coupé. We could have gone further but we would have been far from the celebration we wanted for the 504.”

The Peugeot e-LEGEND is above all based on the famous balance of masses!
“In Peugeot design, we have always worked on the basis of proportions. We try to fine-tune them as long as possible and as far as possible in the project.”

That’s why Peugeot works a lot with polystyrene?
“Yes, we can work very quickly with this material, we can give birth to incredible, perfect masses. But we also use virtual reality to validate the large masses before milling the scale model.”

But “understanding” a polystyrene mass is complicated?
“No, precisely! I’m used to say that if you love it, polystyrene gives it back to you! As a designer, we like to model our ideas right from the start. In the past, we made small models as well as scale 1 models in polystyrene. I remember that when I joined Peugeot in 1993, it was the beginning of 3D and this technique was and still is very efficient. Working with clay also allows us to find subtlety and virtuosity in the language of form.” 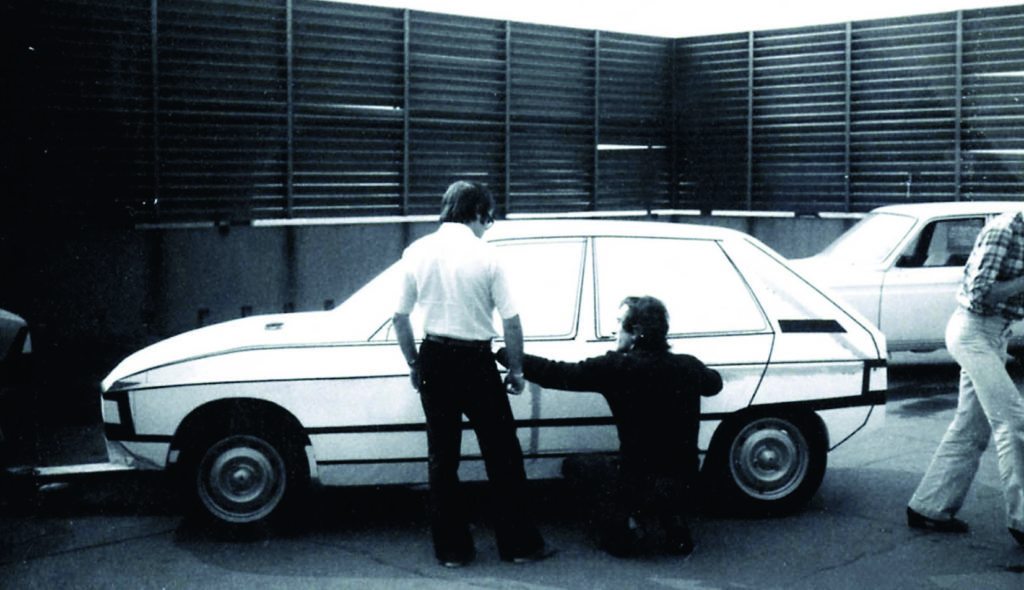 Work on the polystyrene volume of the 205 project (1983) here photographed in 1978 on the terrace of La Garenne-Colombes with Gérard Welter.

Nicolas Brissonneau and Peugeot, it’s a long story?
“I’ve always worked for Peugeot, since my arrival on a training course in 1993. I was a graduate of the École Nationale Supérieure des Arts Appliqués et des Métiers d’Art (ENSAAMA) – Jean-Pierre Ploué and Thierry Metroz both come from the same school – a school where you were trained for a multitude of jobs, except in the automotive sector. I personally learned my job as a designer with Gérard Welter who was then in charge of exterior design alongside Paul Bracq who managed the interior design.” 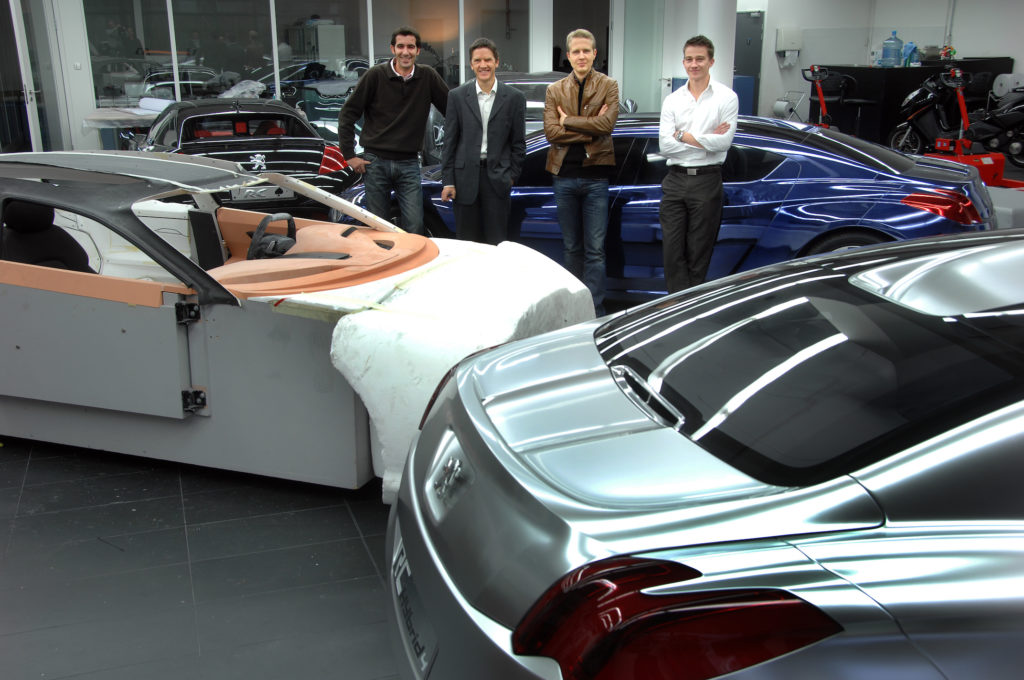 During the study of the 2008 RC Hybrid concept car, with from left to right: Nicolas Brissonneau at the time designer research advance of phase, Neil Simpson the interior designer of the concept, Boris Reinmöller designer ‘exter’ and Bertrand Dantec then in charge of the studio 2 and today in charge of design of the new DS3 Crossback.

Tell us about the atmosphere at the Peugeot style centre then located at La Garenne Colombes.
“The decor is a building facing a cemetery. A building that was renovated at the time because it had been damaged by the explosion of the EDF power station opposite it! We had a terrace at the top where we displayed our models and our offices were below. I arrived there at a hell of a time. There was the 306 Maxi, the triple of the 905 of Le Mans and, on the series side, the 406! (below)

You dived straight into the deep end!
“I came here very young, first as a trainee. I had to understand the job, to be able to make suggestions. In the beginning, of course, you have to help more than you offer. But I was very lucky. I was offered a place in design the year I took my BTS, at the age of 19. I had the possibility of joining the team or continuing my studies and to make my decision, I was given fifteen days. I didn’t think about it for long because I wanted to learn the trade. After my internship, I joined design for good!”

Without sounding like a nostalgic old man, it was a different time?
“We did everything in a more artisanal way than today. But at the same time, we had more time to design because there were of course fewer projects. It was very interesting and exciting!” 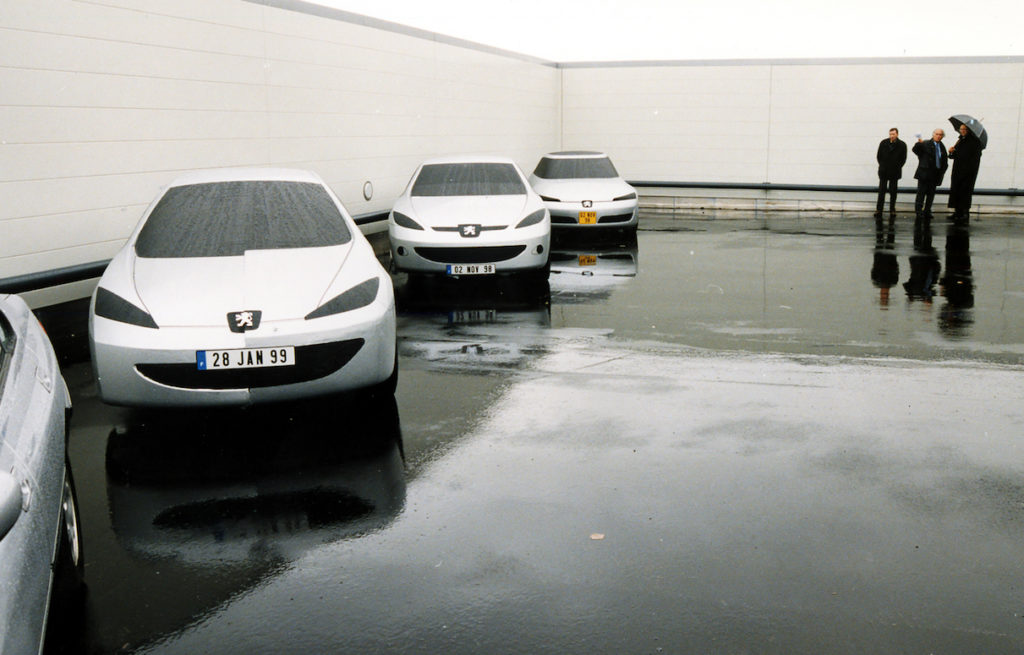 What is your first creation at Peugeot?
“My first ‘competition’ with the teams was the 607. That gave me the opportunity to get into the thick of things with the seasoned designers of the moment! After I was lucky enough to be chosen to study a ‘306’ concept car, it was my first project at Peugeot. And then there were the RC Pique and Carreau concept cars (below), berlinettes designed by Gérard Welter, an incredible moment when we were able to get on board on the Mortefontaine circuit! And then I made a lot of “phase advance” especially for the 3008 or 208 projects, and worked on the new identity of the early 2010 with the SR1 concept. »

A dream career start!
“To be completely honest, I’ll pass you the period when we’re drawing logos and monograms! I did the one for the 406 coupe. But more seriously, it’s important to go through these stages. Because you learn harmony, aesthetics, dynamism on a detail that is very important. It’s very formative!” 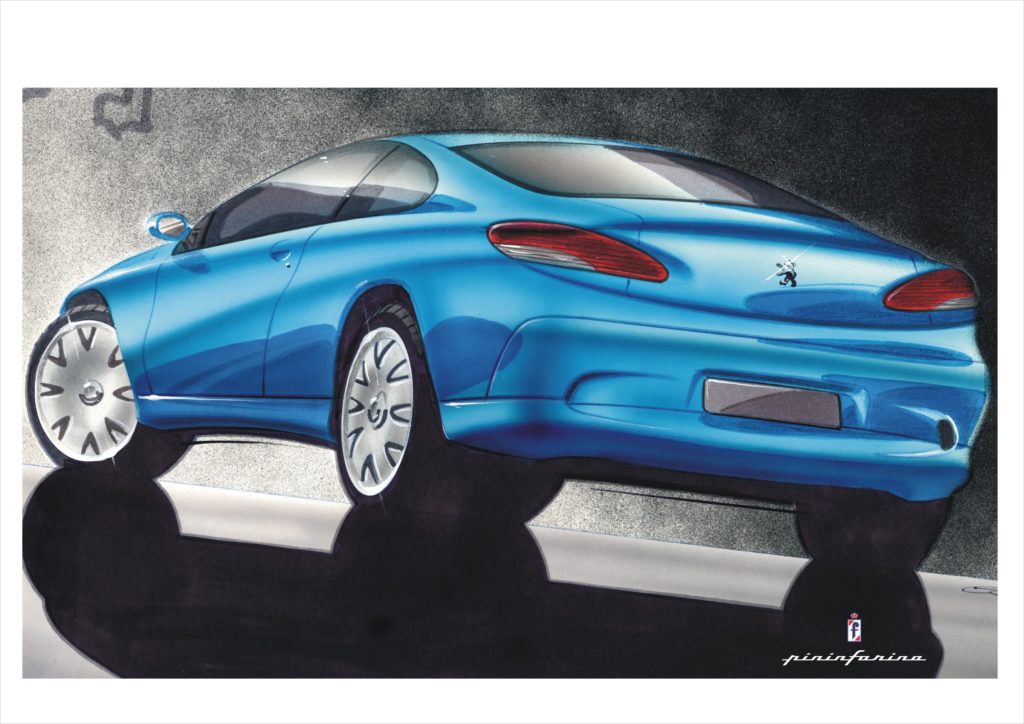 And today… (2018)
“After all these experiences, I’ve been appointed ‘Master’.
We organise ourselves according to experience and management so that the younger ones can benefit from our experience and passion. That’s what’s fantastic here, the optimised team – 10 to 12 designers of many nationalities – is very strong in terms of autonomy thanks to the support of the ‘juniors’ by ‘seniors’ and ‘masters’!”

How do you manage a young designer who is pure creative but who does not necessarily have the brand culture?
“It’s not complicated. I remember that some time ago, during an interview for the “L’étudiant” website, I found a word to define the job in a team: self-sacrifice. It’s not necessarily a strong word, but a fair one. I thus explain that I would not have designed the SR1 concept car as it was in the end if I had been alone. Today, young designers entering the profession want to make their mark. They have a different approach from ours when we arrived at a manufacturer’s because they arrive at a time when the fields of the possible are much more open, especially with the “man-machine” interfaces – HMIs – with all these digital slabs! It was hard to imagine that yesterday and if we had imagined it, we would have had some difficulty integrating the technology of the time, cathode ray tubes, on board!”

So is the job any more exciting today than it was yesterday?
“For me, the job is incredibly different from yesterday, because of the digitisation and working methods. On the other hand, the challenge is more fascinating than it was at the beginning, as you go from an apprenticeship stage to an ever-growing body of knowledge. When you have a ‘back up’ with this experience, you can go beyond the limits in your search for something really new. »

The evolution towards which the car is heading (autonomous, possible driving ban, etc.) scares you?
“I have no fear! There have always been differences in energy, technological developments and people who saw the car to get from point A to point B and others on the contrary to take pleasure in driving, with the noise of an engine, the freedom of a cabrio … From time immemorial, the car has found its customer. Tomorrow, we will have to offer products that are aimed at this new generation of hyper-connected young people.”

e-LEGEND is electric and legitimized by the brand’s past. Are you sensitive to the birth of new electric products based on ‘classic’ cars as Jaguar offers with the 100% electric Type E?
“I would be the first buyer of this type of car! I really believe that.

Interviewed in September 2018 by Christophe Bonnaud. Archive photos of the author and Peugeot Design. 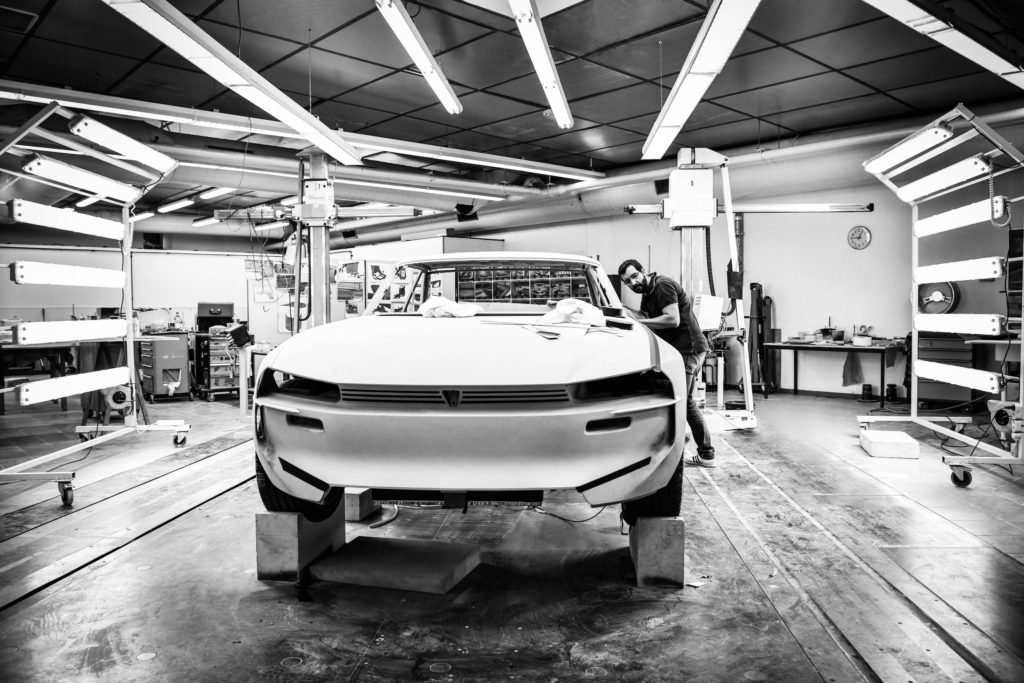