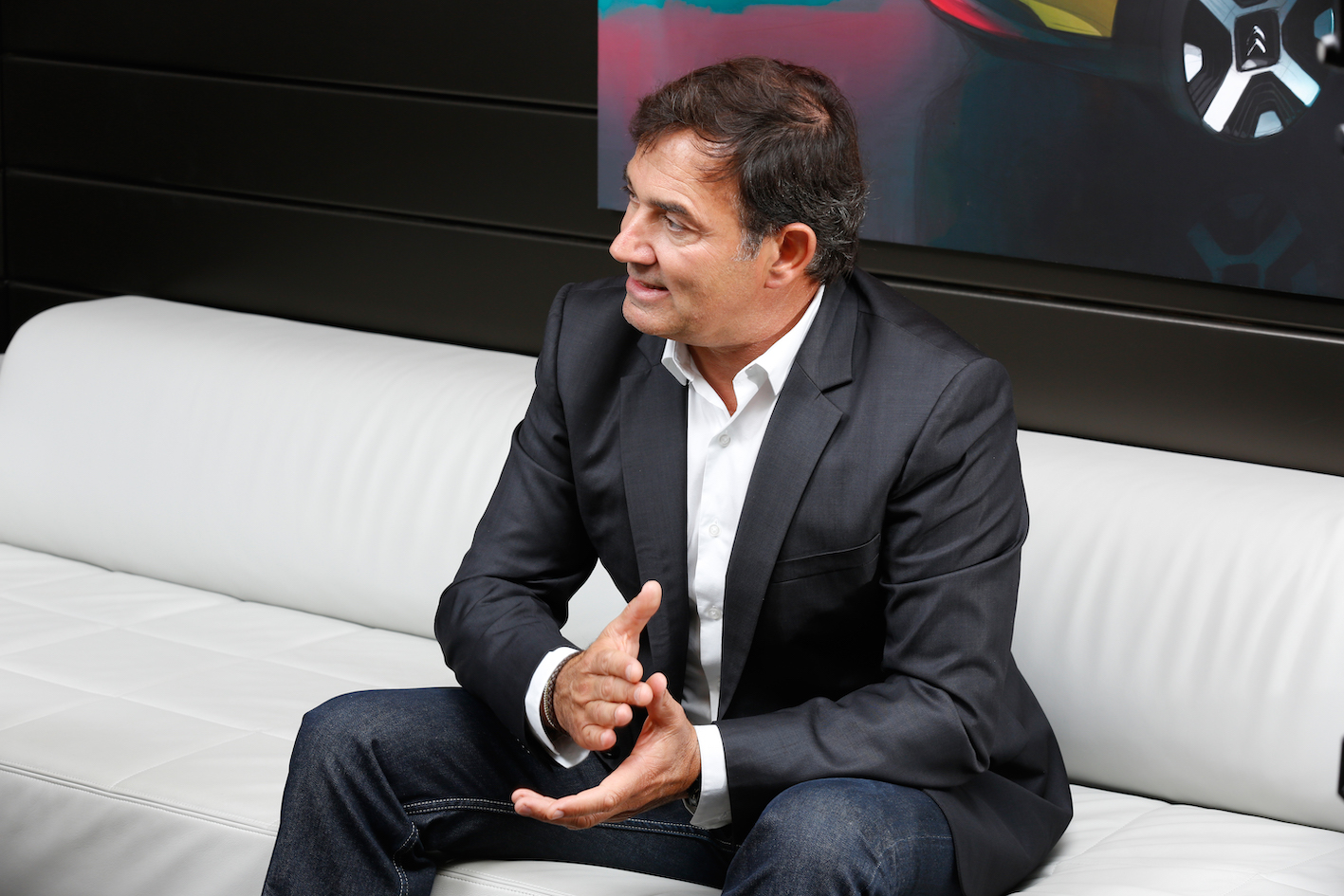 Jean-Pierre Ploué is entering his third decade with the PSA Group! In order to celebrate this anniversary like no other, here is the republication of an interview conducted two years ago. At his rival Renault, Laurens van den Acker is starting his second decade at the head of Renault Design… Stability is a must at the head of French car design! The opportunity for our English speaking friends to discover this interview as it had not yet been translated.

LIGNES/auto: The general public knows you as the boss of the PSA Group design but, in addition to this group and Renault, you have had an international career. Is this a necessary step ?
Jean-Pierre Ploué: “At the time, French design was rather closed, it was difficult to move from one French manufacturer to another. And above all, I was very keen to discover the other worlds of car design in the world.”

What has this international experience brought you?
“I discovered that there are very different corporate and design cultures from one manufacturer to another. First of all, I spent three and a half years at Volkswagen in Sitges, Spain. There, I discovered a rather quality-oriented design and at Ford – which I joined later – I experienced a customer-oriented design. At Renault, where I came from, design was mainly oriented towards “creativity”!”

Renault remains the place where you grew up in this world of creativity !
“At Renault, the entire design department was oriented towards a very strong creative approach led by Patrick le Quément. At VW, this “creative” dimension was not perceived in the same way. The designer wasn’t creating for the sole purpose of creating, but with the ambition of nourishing the brand’s DNA.”

“In fact, this international move was magical for me because it allowed me to bring these three dimensions of “quality”, “customer” and “creativity” to design when I joined PSA.”

The return to France, from Ford to Citroën at the very end of 1999, was due to homesickness ?
“Not at all, I was happy at Ford! I could have gone on without any problem but it so happened that Claude Satinet (then boss of the Citroën brand) and Robert Peugeot called me. Somewhere it was even frustrating to leave Ford!”

However, you have made your way and your beautiful journey in France, without going back to the international scene…
“There was a time when, had the opportunity presented itself, I probably would have done so. Today, PSA is an efficient group, with an indisputable international dimension in terms of design, notably with our studio in China. We even have a small cell in California for “prospective” which helps us to build up the files and set up relations with start-ups in the USA”.

What has changed the most since you started working as a designer? The tools ?
“There are two important notions that condition our profession more, they are the “economic” and “temporal” perspectives. The world is moving very fast, everything is accelerating, we are at the heart of a real breakthrough in countless fields, brought about, among other things, by artificial intelligence and digital technology. And then there is the socio-political aspect which forces us to take technological and international directions. We live in a chaotic world and sometimes we have to deal with the unmanageable.”

Are you saying that the European Commission’s increase to a minus 40% CO2/km emission threshold in 2030 will harm design ?
“No, quite the contrary ! The stronger the constraints will be, the more the design dimension will have to be reinforced. In surveys conducted all over the world, the design dimension plays an important role in the final choice of the client. The economic aspect obviously counts, but in many parts of the world, the trigger is still design.”

Can you clarify the organization of Opel design within the PSA Group? Are you the boss of Opel style ?
“Opel’s Style Director is Mark Adams. My role as Director of Design is to ensure that our brands have a diversity of styles in relation to each other and the competition.”

“If a product, whatever it is, is not in line with the brand’s DNA, if it is drifting or if there are overlaps with a competitor within the group, it is my role to arbitrate. I therefore ensure the differentiation of styles and I also guarantee that each brand has the best tools to grow. Opel needs to make progress on this issue.”

Is Opel design going to join the DNA here in Velizy ?
“Opel design stays and will stay in Germany. I visit Opel regularly and we have style sessions with Mark in Rüsselsheim.”

How did the Opel teams react when they found out how you work ?
“They were glued in, particularly by our tool that helps us to have a vision of the future design of each of our brands. It’s the DNA manifesto of each brand that addresses all areas of design…”

How does this tool look like ? Are these keywords ?
” It is partly a search for keywords that define the whole design of the brand (materials and colours, style, graphic language, etc.).
The formal language is associated with the values of the brand, with these famous key dead. From the moment you define this language based on the history of the brand and its values, you cannot make a Citroën, Peugeot or DS style different from what they are.”

But your brands are almost all in the same range, which makes it harder to work, doesn’t it ?
“No, the world is so multiple, so varied and diverse that it would be quite incredible if there was only one standard ! There’s no overlap. On the contrary, with our very clear “mapping” on each brand identity, we even fight against the language of a global design. PSA is a recognized player in the world in terms of design… Maybe that’s also why people come to copy us!”

After the recruitment of Thierry Métroz from outside (Renault), it is still a designer from outside the group who has taken responsibility for the style of a brand: Pierre Leclercq at Citroën. Why not choose in-house ?
“Oh no! I can’t agree with you: Alexandre Malval was an in-house recruit and Gilles Vidal too ! Two internal recruitments for three brands (at the time), I think that’s pretty good! But for this type of recruitment, there is no absolute rule. For Citroën, it’s a good thing that we recruited Pierre. It will allow us to renew ourselves.”

Thierry Métroz, the design boss of the DS brand above, Gilles Vidal (below), the Peugeot design boss …

…and Pierre Leclercq, below, who took charge of Citroën design at the end of 2018 : the dream-team ?

Don’t you think the amateur’s a little sick of SUVs on every floor ? Is the sedan definitely dead ?
“But you have the Peugeot 508 ! It’s there, it’s beautiful and magical to drive… So no: I don’t think the sedan is dead. Not at all.
Given the political and ecological context, it even has a very long career ahead of it !”

So SUVs are doomed by future environmental regulations ?
“No, but it’s pushing us to go electric or hybrid.”

The electric cars that are just appearing seem to have been studied in a hurry. They appear to be drafts…
“You’re forgetting the economic dimension. We are not here to make beautiful objects, we are here to respond to the demands of the markets while taking into account government regulations.
Starting from scratch to design these new cars would involve huge investments. These cars are not drafts. Manufacturers are doing it in a way that allows them to preserve the profitability of the company. “

It’s a shame to see 100% electric new models equipped with a sometimes gigantic front grille, when there’s no more combustion engine to cool down !
“Maybe some manufacturers haven’t found the codes to keep their identity without a grille. We don’t have this problem and we showed it with our 100% electric Instinct concept car (below).”

Let’s stay in the near future. Does the development of the autonomous car and its interiors where you will live differently change your recruitment method towards more interior designers ?
“No, because we already have the competence. It is true that new professions are emerging. For example, we’ve created a new UXCT (User Experience Cockpit Teams) department with 200 people, which deals, among other things, with all the HMIs and the ergonomics of the cockpits of the future. This is a cross-functional entity within the group.”

Is the autonomous car still a radical change ?
“Not so much! The evolutions will follow those of the stages of autonomy.
It’s not violent and customers will also have to be able to buy these technologies !”

We talked about Citroën, Peugeot and Opel. Stay DS. The DS3 Crossback seems to have given up any overload that it had assumed until then .
“Overload? Of what : chrome, style ?”

Both of them…
“No, I can’t let you say that… I don’t see in the DS’s that we’ve made the chromium overabundance you’re talking about. That’s not true. Take a good look at a DS7 and you’ll see that there’s no more chrome than in an Audi. As for the styling, it’s adapted to the segment.”

“For example, on the DS 3 CROSSBACK we have chosen integrated and hidden window washers. We were able to remove the body belt and move in the direction of greater purity and simplicity. To say that the DS style is baroque is not true. On the contrary, there’s sophisticated work on the lights and headlights. The side is natural and pure compared to a Toyota C-HR !”

Let’s forget about chrome, baroque and end with a personal question. If you had to write a letter to your children about the three best professional moments of your career, which ones would they be ?
“What matters to me is that I have to have fun every day, that I have joy and pleasure. So, sincerely, if there were only three, my life would be sad! Above all, I would say to them: “Find a job in which you have passion and love. Otherwise you’ll never perform, you’ll be machines, tools. You’ll never be yourself if you don’t do the job you love…”

I was thinking mostly about strong encounters !
“The encounters, they obviously meant a lot to me. I think first of all of Doudou (Jean-François Venet) who was my first chef. I admired him. I would also mention Claude Satinet who impressed me as a brand owner. There was of course Vincent Besson with whom we rebuilt the Citroën design when I arrived. These are people who count and who make you question yourself, make you progress, and that’s magic. And then of course, Carlos Tavares, who is also impressive…”

Interview by Christophe Bonnaud in 2018