We are going to dive into the universe of a manufacturer of hyper-luxury. A French brand belonging to the German Volkswagen group, Bugatti has just celebrated the production of the 200th copy of the Chiron. Let’s discover how this supercar is produced in Molsheim. (part 2 of 2)

(Continued from Part 1)…. The second production area is for the assembly of the chassis and 628 kg powertrain, which, thanks to the increased use of carbon and other light materials, does not increase by a gram compared to the Veyron, despite its 300 additional horsepower.

The workshop includes two chassis assembly stations, each with three employees working on each. They need one week for assembly and, unlike a traditional chain worker, they must master the complete assembly of the chassis, i. e. the rear part, the monohull and the front part which constitutes the structural element.

While the assembly of the rear part, articulated around the powertrain, is being carried out, the monohull and the front part are assembled together, then completed by the necessary wiring and connections connecting the engine at the rear to the radiators at the front. The cooling system is equipped with three coolant pumps. The diameter of the pipes corresponds to that of a fire hose, which ensures a high flow capacity.

The only electronic assistance used when assembling the chassis is the new screwing stations. They make it possible to store each screwing in a computer that signals to the assembler when the tightening has reached the correct torque. There are more than 1800 screwing points on a Chiron, of which 1068 are documented in the system. The highlight of the chassis assembly is undoubtedly the combination of the monohull and the rear section. Fourteen titanium screws ensure the extremely strong connection of the two elements.

The last step in the assembly of the chassis is to receive its 4 wheels before driving to the next production area: the filling station. It is used to provide all the fluids the vehicle needs: engine oil, transmission oil, brake fluid, hydraulic fluid and coolant that is vacuumed and tested for leaks in the system for 10 minutes. This station is also the one where the 16-cylinder engine is started for the first time, which is always a special time for employees.

The chassis is then taken a few metres further to the chassis dynamometer, which represents the largest investment made in the transition from Veyron to Chiron production. The new facility is now so powerful that it can produce up to 1,200 amperes of electrical energy. This excess energy is then redirected to the electricity grid of the municipality of Molsheim. The Bugatti dynamometer is the most powerful dynamometer in the world in its class. This test bench can simulate speeds up to 200 km/h and accelerations at full speed (1,500 horsepower).

If Chiron validates all the tests, it can move to the next production area and receive its bodywork, all the components of which are made entirely of carbon. Since some lightweight components are bulky and fragile, which makes this step particularly delicate, a pre-assembly step has been set up.

The next phase : the leak test. The Chiron “takes a shower” of half an hour comparable to a monsoon rain with varying intensities. Only once this test has been successfully completed can the installation from the inside begin. During this stage, which usually lasts about three days with two employees. The Chiron is then prepared for road tests and acceptance. For this reason, it is first entirely covered with a chip-resistant and transparent film. This process alone lasts one full day, the same duration is necessary to remove the film and clean the vehicle after the tests. For the road test, Bugatti does not use the customer’s wheels or the base of the final vehicle in order to preserve them. During the acceptance test, the Chiron travels 300 km through the Vosges to Colmar airport in order to use its airstrip. It is subjected to a functional test for which it is necessary to accelerate beyond 250 km/h. The return to Molsheim is then more “comfortable” on the highway to cool the vehicle.

The Chiron then passes through the paint booth, where the protective films are removed before being cleaned and polished. This beauty treatment usually lasts two days, then the vehicle is taken into the light tunnel, where an employee inspects it for more than six hours from every angle, with a sharp and merciless eye. If he identifies defects, he then sends the Chiron back to the paint booth where his colleague will focus on eliminating them. This can last between three hours and three weeks, in the event that a single piece must be produced again.

When the light tunnel auditor finally validates the exterior of the vehicle, Christophe Piochon then meets with the heads of the Sales, Quality Assurance and Customer Service departments for the final validation. Once everyone is satisfied with the result, an appointment can be made with the customer for the delivery of the Chiron. Before that, however, he will have already visited Molsheim several times. Thus, in addition to the road test in a demonstration vehicle, the signing of the sales contract and the configuration of their future Chiron, customers are happy to visit the workshop to follow the progress of the process in person. They even have the opportunity to participate for a day at ́assemblage in “their own” sports car.

After about two months, the Chiron can finally leave the workshop. During this period, twenty employees, including two women, assembled approximately 1,800 parts, all of which form the most powerful, fastest, luxurious and exclusive production supercar in the world. They are supported by 17 employees who take care of the logistics and 15 others in charge of quality assurance.

“Quality and manpower are the two branches of Bugatti’s DNA. Just as we did 110 years ago, we pay great attention to the selection of materials and their quality,” explains Stephan Winkelmann, President of Bugatti. “The founder of the company Ettore Bugatti said that a technical product was only perfect when it was aesthetically perfect. This includes the workforce.” That is why quality control has a great significance.

In 2018, Bugatti produced 76 Chiron. This year, it will be more than 80 vehicles, with the first Bugatti Divo (below). As a result, the French factory continues to invest in the future and is hiring 20 new employees in the production and logistics departments. 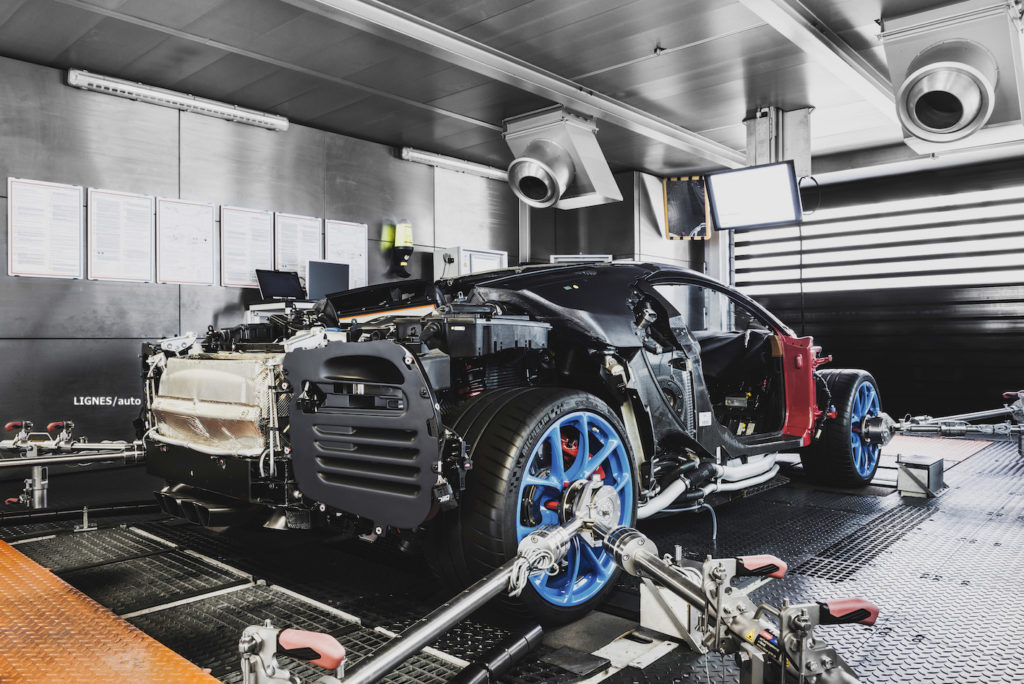