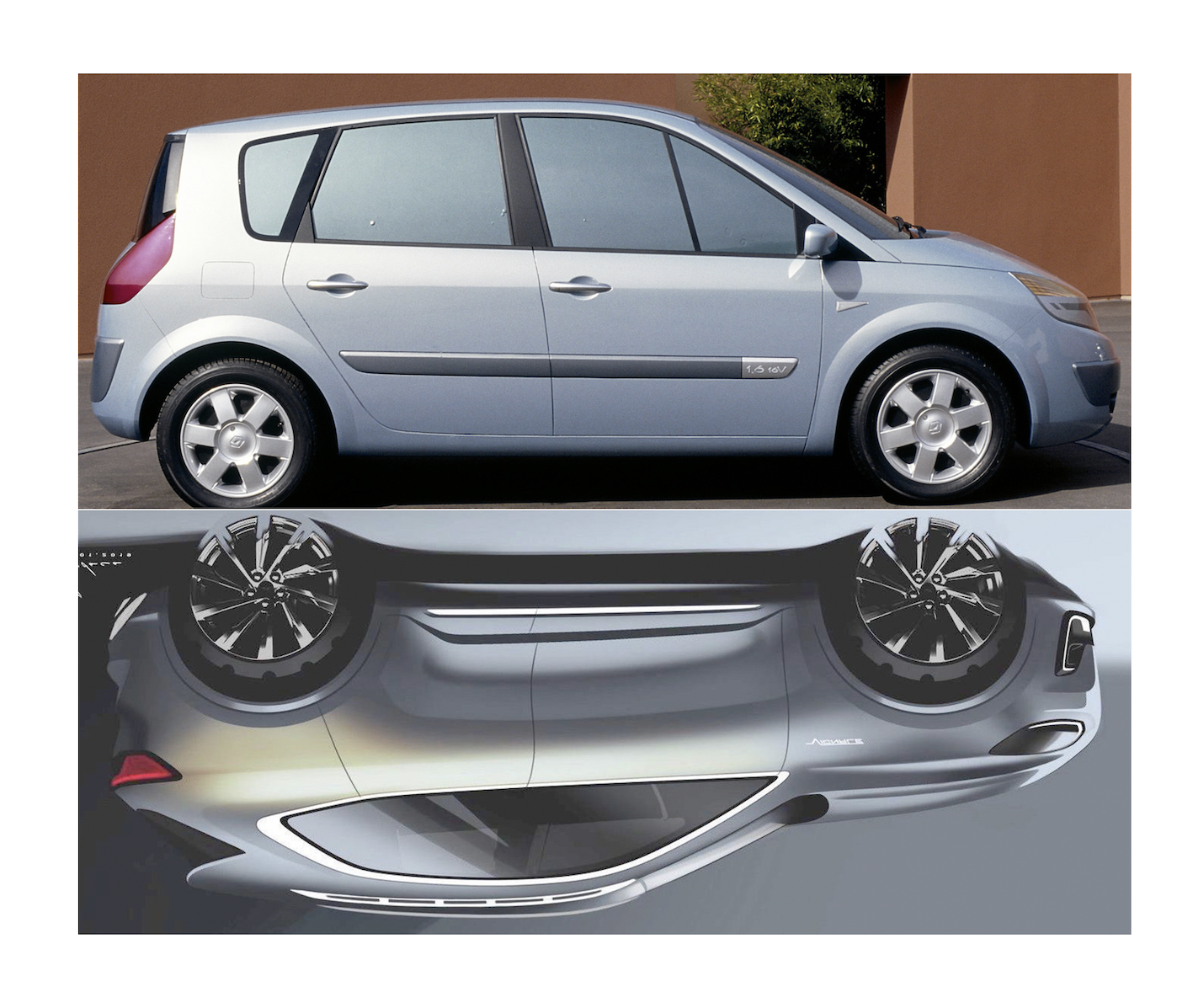 They have (almost) disappeared from the catalogues and yet they were unavoidable: the MPV. In the 1980s, the good intentions of the designer when he had to accommodate a whole family on board in great comfort were to be turned upside down by this innovative concept. This is the story of the turbulent birth of the MPV concept and its untimely death.

A front bonnet to house the engine, a cabin large enough to accommodate four or five adults, and a rear trunk to swallow the luggage. These were the basic rules of car architecture until the 1980s. The designer knew how to design a car, and if the boot was too small, he designed a station wagon; if the driver was sporty and childless, he sketched a two-door coupé. It was an easy life for the designer from the 1960s to the 1980s. At the beginning of the 1980s, the first stirrings of a vast change came with the arrival of the MPV concept

This change is the result of a societal evolution that has given pride of place to the family. And above all, to new buyers: blended families and retirees who have become very active. In the early 1980s, Chrysler began work on a compact “van”, which was immediately followed by more confidential but equally visionary projects, such as the Helios compact minivan (above) designed by Frenchman Antoine Volanis in 1983, almost 40 years ago.

And then, by chance, the Espace concept designed by the same Volanis fell into Renault’s lap, after having been incubated by the competitor Peugeot, which was unable, unable or unwilling to invest in this project finally validated by Bernard Hanon at Renault. A major breakthrough then occurred. From then on, the design offices became aware that a car was designed from the “inside out”. This was well before Audi’s Urbansphere concept car (2022).

This change in mentality was confirmed with the development of the MPV in the 1990s. The idea of offering the family all possible and imaginable comfort on board a “car” led designers to completely rethink their vision of the automobile. Initially developed for the top of the range (Chrysler Voyager, Renault Espace, Peugeot 806), the MPV was adapted to other market segments with the arrival of this concept of the volumetric car in the compact segment.

The idea is to create a double floor on these cars, allowing multiple storage spaces by raising the seats. The living area then needs to be moved forward, an architectural approach made possible by raising the overall height of the vehicle. This advancement of the living area moves the windscreen forward, giving the whole vehicle an almost monovolume design. All the lines move and the designer has to deal with a high car, making it all the more difficult to balance the profile. In 1991, the Renault Scénic concept car was born not from a fixed design but from a magnificent travel notebook.

A booklet where designers and those responsible for materials and colours will put their ideas of family travel. It’s new, so we imagine tilting and turning seats, a sliding central console, a hollow floor offering a thousand and one storage spaces, all in a length of just over four metres. The Scénic is more than 1.60 metres high and even then, the concept car did not follow the path sketched by Anne Asensio, who planned a cabin with the hump of a Boeing 747 (above) to make it easier to move around on board. After the Espace of 1984, Renault marketed a smaller model in 1996, the Scenic. A commercial success. Louis Schweitzer had a keen eye for detail when he imposed a steel body: production rates could be increased rapidly.

The MPV broke out of its narrow confines and established itself in almost all segments of the range. Patrick Le Quément, then head of Renault design, was nevertheless disappointed not to have been able to offer the first Scénic a dedicated style. The then boss of the Régie tightened the purse strings and the Renault MPV had to deal with too many elements in common with the Mégane saloon. In 1995, Citroën entered the battle with its own formal language. The Xanae concept car (above) anticipated the famous Xsara Picasso of 1998. The shape of an egg was chosen, or perhaps that of a womb-like cocoon.

At the same time, Matra, the originator of the Espace with Renault, always ahead of the game, mixed the concept of the MPV and the coupé with its Espace Club. It was a revolution: the beginning of the hybridization of concepts which is to the automobile what variants are to viruses. The Espace Club was designed the same year as the Citroën Xanae concept car.

Surprise, the Matra Espace Club looks like the Citroën Picasso, whose design is credited to Donato Coco!
READ THE HISTORY OF THE MATRA CLUB SPACE CUP HERE : http://lignesauto.fr/?p=2167
The resemblance is obvious and yet fortuitous. It is not Antoine Volanis, author of the first Espace design, nor Renault, nor even Donato Coco from Citroën, who are at the origin of the design of this Espace Club, but Giorgetto Giugiaro.

The designer “of the century” was even entrusted with the production of the prototype. But Renault did not follow up on this proposal from Matra, as it feared that this 1995 project would encroach on the territory of its future best-seller Scénic. However, Renault would later pursue this MPV coupe theme (above) with the Avantime in 2001, a failure that was partly responsible for the closure of the Matra factory at Romorantin. The MPV war was launched but the competition did not necessarily come from where the manufacturers expected.

It is the unsuspected speed of the development of SUVs that has swept everything in its path. Today, few manufacturers (Volkswagen, BMW…) offer both a MPV and an SUV in their range. Should the SUV concept undergo the same transformation as the MPVs did in their time? It is not impossible to think so when we see the rise of dynamic silhouettes on the theme of “coupé” SUVs, and the success of a product like the C5 X in China, a crossover of the three concepts of estate, saloon and SUV (above)… Will SUVs die like their MPV brethren yesterday?

At the 1972 Paris Motor Show, Heuliez unveiled the H4 prototype, a Peugeot taxi designed by Yves Dubernard on the 204 platform. This very French theme was also to change the way Giorgetto Giugiaro worked. From 1968 to 1976, Italdesign was keen on sporty and slender concept cars. For 1976, Giugiaro began to design a unibody vehicle in response to a request for proposals from the Museum of Modern Art in New York. The latter wanted to promote research into a city car capable of improving the comfort of its passengers.

With its “New York Taxi”, Italdesign is paving the way for vehicles designed from the inside out. In a length of four metres, Giugiaro provides space for five passengers and the driver, as well as a large area for luggage. Italdesign is pleased to announce that its Taxi occupies a floor space of only 6.98 square metres, compared to the legendary New York Yellow Cab’s 9.72 square metres. The totally revised concept of accessibility led Italdesign to develop this type of vehicle with the Megagamma two years later and with the Capsula in 1982. With Yves Dubernard’s Taxi H4 and Giugiaro’s ‘Volvo’ Taxi, the MPV had already sown its DNA in the 1970s.

When was the first minivan born?

The era of contemporary MPVs began in the mid-1980s with the arrival of the Chrysler Voyager and then the Renault Espace. But we can move the cursor wherever we like, according to our sensibility. For example, the Stout Scarab from the 1930s. It revolutionised car architecture: it was practically a monovolume that offered interior modularity with pivoting rear seats. Its styling was unlike anything else in the world, and it could be considered the first “minivan” in the contemporary sense. It was designed by former journalist and engineer William Stout.

Ten years later, at the end of the 1940s, DKW’s Schnellaster, the “F89L”, was one of the first vans to have the intelligence to transform itself into a “family car” with average comfort, not very automotive. Renault above, with the collaboration of Ghia and its director L.Segre, produced the “900” prototypes, with an advanced cabin, which did not fit into the concept of the minivan, nor into that of the monovolume (see below the difference between these two concepts.) This was in 1959, three years after Fiat presented its 600 Multipla, the forerunner of the “mini” minivans.

It was not until the early 1980s that Chrysler’s studio launched the study of a van that would become the Chrysler Voyager in 1984, the forerunner of the modern generation of MPVs. The Renault Espace followed shortly afterwards, while in the world of compact MPVs, Antoine Volanis’ Helios project was thirteen years ahead of the Renault Scenic…

Here is the difference between these two terms which apply to two distinct and sometimes miscible concepts:
-MONOCAB

The monocab is an exterior styling concept described by a single line design from the front bumper to the rear. There is no break between the bonnet and the windscreen and there is no prominent rear boot.

The MPV is a concept of interior architecture described by the modularity of the passenger compartment, in terms of the seats or the multiplication of storage spaces.

MISCIBLE OR NOT?
An MPV, with its on-board modularity concept, is usually dressed in a monocab body with a seamless style from front to back, like the Renault Espace. But it doesn’t have to be: the 1988 Fiat Multipla (below) was also a MPV (modularity on board) but with a distinctive style and a very pronounced front bonnet. It was therefore not a monocab. Conversely, many dream cars from the 1970s, such as Giugiaro’s Bizzarrini Manta, were dressed in a unibody style, with no break in the bonnet/windscreen junction, and yet they were far from offering the habitability of a MPV!