What have we not heard about the design of the production Renault VelSatis, a tall saloon that appeared in 2001 and lacked the sublime proportions of the 1998 VelSatis concept car. It is now time to set the record straight.

In the 1990s, Renault strung together concept cars like magnificent pearls (below). Subtly distributed over the years, passing from emotion to intelligence, from sportiness to exoticism, the Laguna, Scénic, Racoon, Argos and Initiale, guide the steps of all Renault designers towards series products with a strong concept. And they inspire a good number of competing design managers. These concepts revive the talent for conceptual invention that Renault had in the 1960s and up to the 1980s, with the R4, R16, R5, R25 and Espace.

But in this beautiful history, there is a chapter to be marked with a black stone, that of the X73 programme which gave birth in March 2001 to the VelSatis saloon in series. The renewal of the Safrane (itself unveiled in 1992 and resulting from the Gaston Juchet era) was intended to recapture the spirit of the 1984 Renault 25, which remains the last successful Renault. In 1995, the Initiale concept car laid the foundations for a concept capable of taking over from the Safrane. The timing was perfect, since at that time, the Initiale fitted ideally into the renewal schedule, and took shape to express the desire to design a top-of-the-range saloon in the French style, different from the German references.

Unfortunately, the management decided to swap the replacement of the Safrane with that of the Laguna, which was born one year later, in 1993. This second generation Laguna arrived in 2000, postponing the replacement for the Safrane, not yet called VelSatis, by more than a year. Patrick Le Quément and his teams chose this opportunity to launch the new concept car planned for the 1998 centenary, towards an expression of the French top of the range, and to draw inspiration from both the Initiale and this anniversary concept for the X73 programme.

The 1998 VelSatis concept therefore serves this purpose. Even before it left G-Studio’s Italian workshop at the end of July 1998, it was still in the form of a full-scale model and, in January of that year, it was sent to the model-making workshop where the two proposals selected for the X73 series project were produced. Two completely different proposals. One was born of the design team’s desire to create a low-slung, statutory car, with a style reminiscent of the French Facel-Vega of the post-war period, and materialised in a 1/1 scale model.

The other is the result of studies by the product management. It is based on the architecture of a tall saloon. This is nonsense when you remember that the Espace (a minivan also with a high architecture) is already in the range! Patrick Le Quément confirms that this period was rather complicated. “From 1995, following the Initiale, I put my teams to work on 1/5th scale models for a production car. We had perfectly synchronised the timing of the concept and the production car so that the Initiale would have a strong impact on the saloon. In my mind, it had to look as much like the 1995 concept car as possible.

Above, one of the models of the X73 “low car” project inspired by the 1995 Initiale concept car, below.

It was in this year that Patrick Le Quément took charge of “quality” at Renault, in addition to his position as director of industrial design. Forced to be less present with his creative troops, he had less time to devote to the X73 programme. At the time when Renault reversed the programming of the Laguna and VelSatis series, to the detriment of the latter, a change at the head of the product department changed everything. In September 1995, Rémi Deconinck, who had been in charge of the exploratory vehicle creation service in the vehicle engineering department since 1993, succeeded Jacques Cheinisse as head of the Renault product. As is sometimes the case with car manufacturers, the ‘product’ and ‘design’ departments are not always on the same wavelength. That’s an understatement.

The eternal conflict between engineers (Rémi Deconinck, an engineer from the Institut supérieur des matériaux et de la construction mécanique, joined Renault in 1976) and designers is still alive and well. This situation was exacerbated at the time, since design was integrated into the general management committee, which was not the case for the product. Did this situation give rise to a certain jealousy? In any case, the product logically benefited from a lowering of the guard of the design boss at that precise moment to impose its specifications for a high car.

Patrick Le Quément notes that Louis Schweitzer puts a relative distance between the two of them, because internally, many people find that the design director is too close to the president. Decisions on this programme were taken by the committee, without the presence of the product, and it was Georges Douin who asked Le Quément to pass on the information to Rémi Deconinck!

“It was an unbearable situation. In order not to offend anyone, Louis Schweitzer seemed to take one decision in my direction and another in the direction of the product. There was an outcry and Deconinck pushed for the project to be based on a high architecture. Once the deal was done, it was obvious that the car would suffer from a complicated weight distribution, with a long bonnet and a rear end that was too short, all with a car that was too high…”.

When Rémi Deconinck was appointed, the official press release announced that his role would be “to analyse Renault’s product offering in order to make recommendations for its future development on markets outside Europe.” The 1998 concept car, in all its majesty, exacerbated misunderstandings when the production saloon was presented.  The commercial failure of the VelSatis therefore leaves one question unanswered: what would have happened to it in markets outside Europe if it had been based on the architecture advocated by the industrial design team? History cannot be rewritten… 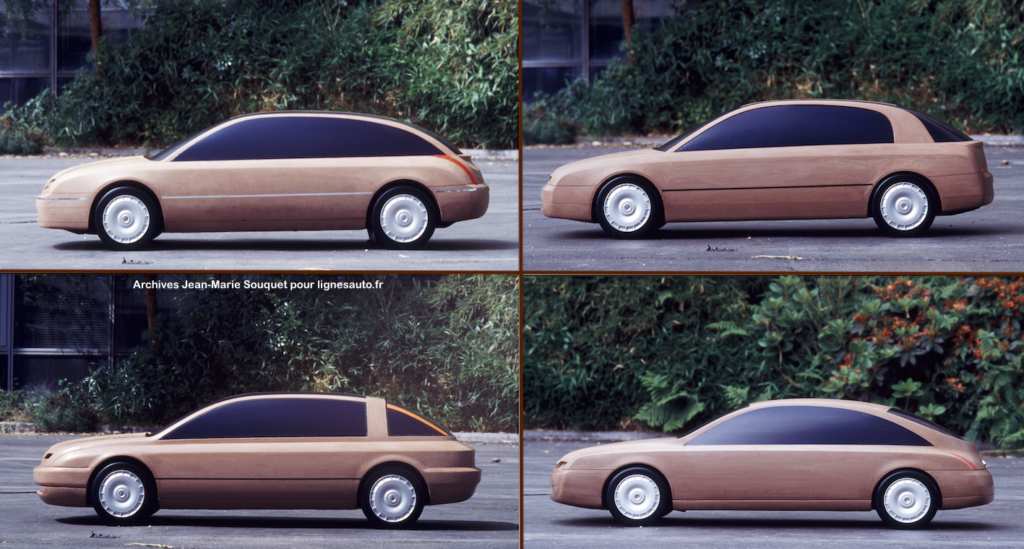