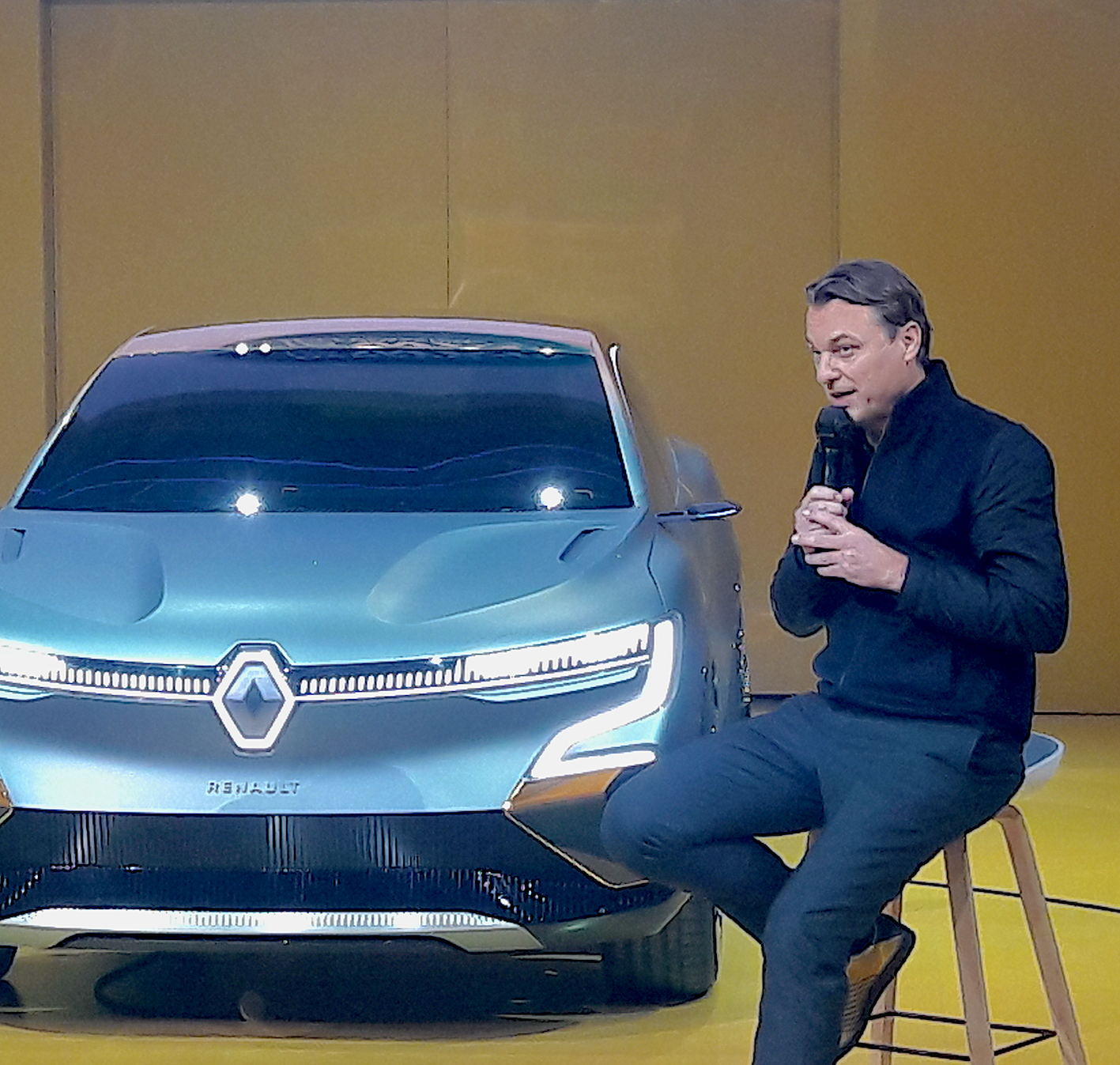 We are going to start this interview with Laurens van den Acker, Director of Design, Renault Group, with what the client doesn’t see: the platform. When we discover the Alliance’s CMF-EV – on which the next family of 100% electric Mégane(s) is based – we discover an architecture with an electric front engine.

This is the opposite solution to the one chosen by the German architects of the Volkswagen Group’s MEB. Of course, the CMF-EV will be able to accommodate an electric machine also at the rear, but the majority of the Alliance’s silhouettes resting on this substructure will therefore be front wheel drive.

In terms of design, this choice has a strong impact. What was the weight of Laurens van den Acker’s department in the definition of this CMF-EV? The design director explains that “the platform is a long-term project and this obviously concerns a large number of future models. The design therefore has an impact in certain choices. Engineering starts by designing this platform with the smallest possible car. This is the case with the Mégane eVision, which is only 4.21 m long, and in this case it had a big impact on the definition of the CMF-EV.”

Renault didn’t want to design a one-box sedan as Volkswagen did with the ID.3. Instead, Laurens van den Acker and his teams sought to take advantage of this platform “to propose new proportions. We know that an electric car will be taller than average because it takes its batteries under the floor. We experienced this with the Twingo designed on a platform intended to accommodate an electric version” below.

“With the Mégane eVision, the architecture benefits from very thin batteries, that’s a first point. To compensate for the fact that electric cars are a little taller, a few styling tricks have to be applied, such as larger tyres to break up the proportions, which doesn’t hinder the turning radius because the EV engine is more compact, so the turning circle remains excellent. The other possibility highlighted on eVision is very short overhangs which, combined with a very long wheelbase, give the impression of a low car”.

However, it’s surprising that with this new platform, the future Mégane sedan still has a bonnet, high perched and very flat. Very automotive in a way. “It’s deliberate” reassures us Laurens van den Acker. “We chose not to go into the voice of a one-box design, because even if the interior volume is exceptional, we wanted above all to design a sexy car, not a MPV! We chose a silhouette that makes you want to. I remember a meeting where we presented several designs for this first sedan of the EV family, and we quickly came to an agreement with the management for this project.”

Mégane eVision is a compact sedan in the “C” segment that carries the codes of an SUV or even a coupé. Luca de Meo – general manager of Renault – having asserted that the Mégane range of tomorrow, 100% electric, would be built around several silhouettes, how can we design these silhouettes since everything is already in the sedan car!? Laurens also wants to be reassuring: “the stakes are not very different from those of the very first Mégane family in the mid-1990s. We still know how to adopt this strategy of multiplying the number of silhouettes for the same family. We’re comfortable with it and even smarter than at the time!”

A strategy which seems to be in opposition to the one adopted by all the manufacturers today and which consists on the contrary in reducing the number of silhouettes! “Luca de Meo asks us to design more silhouettes in the “C” segment of the Mégane, but at the same time he asks us to do less elsewhere! I think we need to find the right number of silhouettes in our range. Luca de Meo’s observation is to say that we had too many cars in the entry-level and “B” segments, and not enough in the “C” segment, which is essential in Europe.” The thermal Mégane will end its life cycle but will not be replaced as it stands, only the Mégane EV family will survive in the long term.

Luca de Meo above, announced that “we must reconnect Renault with its history and iconic products” as was the case with the Twingo and its (small) R5 Turbo genes (below). Good news! “Yes”, Laurens van den Acker recognised with delight. “Eventually there will be vehicles that will draw on the DNA of the brand’s icons. That’s bound to be nice for the designers!”

Is the formal language announced by the Mégane eVision show car dedicated solely to the electric vehicles in the range, or to the entire range? “I’d be tempted to say that we’re going to leave a little more style diversity in our range but frankly, it’s difficult to predict what’s going to happen with the future shape language because you know that there’s a new head of Renault design arriving in mid-November!”

Gilles Vidal (above) is effectively in charge of the design of the Renault brand, Alejandro Mesonero takes over Dacia and Antony Villain takes over Alpine. We will be moving forward on the name Patrick Lecharpy for the fourth entity dedicated to e-mobility, unofficial information, to be confirmed. Gilles Vidal arrives from the direct competitor, with the great success of the Peugeot 3008 (below), precisely the vehicle that seems to be lacking in Renault.

When will we see the Vidal style on the Renault’s. “I would say: as soon as possible! Obviously, it won’t be able to touch everything that’s already in the pipes of industrialisation. That’s the price to pay when you change companies, for at least two to three years. We have all experienced this when we change jobs. The good news is that we’re starting to get faster and faster and I’m sure you’ll see Gilles Vidal’s style in less than two years, because I really want to give him the free rein to develop his paw”.

For lovers of design and therefore of concept cars, the forced or economic absence of motor shows is rather bad news. Has Renault cut concept car budgets in the face of this situation? “Frankly, it’s true that without a show, the life of a concept car is more difficult and I find that extremely unfortunate, because as you know, I love concept cars…” We remember in particular the Mazda period, below!

“Yes, I enjoyed myself then! I’ve always liked this communication tool, which shows that a manufacturer knows how to dream. If a company no longer knows how to dream, it has no future. But concerning the reduction of budgets, it would not be linked to the usefulness or not of concept cars, but rather to the situation of the automobile industry in general and that of the brand in particular, without forgetting the health situation. When you create a concept car, you have to know what message you want to get across, what is next in the product plan. Luca de Meo doesn’t want to promise things he can’t deliver. This will have an impact on our concept car strategy, but you’ll find that out in the coming months.”

The Mégane eVision is only a model and does not show its interior. Is this due to delays, to the Covid or is it a well-considered decision? “It was planned from the start of the project. We first wanted to announce our ideas for this eWays event. There will be other stages of discovery of this concept, until the presentation of the official car at the end of next year.”

The concept cars have shown different strategies in the definition of tomorrow’s interiors: a multitude of screens for some of the manufacturers (Peugeot e-Legend), fewer screens for others (DS ASL). Where does Renault stand? “I think that we mustn’t take too firm a position in this field. We’re still in a kind of inflation of screens, but it’s not a whim of the designers. It’s rather linked to this desire to communicate more and more information, especially with the cars whose driving will be increasingly delegated”.

“With connected cars, there are more services, more driving aids. And the simplest way to deliver this information is via screens. The inflation of screens seems unavoidable, but it will not be the same for everyone. I can well imagine that a Dacia customer will have different desires from an Alpine customer or an Espace customer. The field is so wide that I don’t have a simple answer to say whether there will be more or fewer screens tomorrow.”

Since you have pronounced the name Alpine and this brand has been clearly identified as one of the four of the Renault group, let’s talk about the team in charge of its design: will it be developed? “Yes, of course, because we are going to follow this desire to develop the brand and the team’s work will increase.” And Laurens goes even further by evoking the restructuring of the group around the ‘brands’.

“There are just over 500 people in the world who work for the Renault group’s design. With the reorganisation based on four brands (Renault, Dacia, Alpine and e-mobility), it’s a new adventure where you work for different brands within the same design studio. I am delighted with this evolution because it was really time for this change. Design wanted to work in this direction but it didn’t make sense as long as the company wasn’t organised by brands. This is now the case.”

Is the material reorganisation of the Guyancourt design studios, which will take place in 2016 under the name ‘R*Generation’, compatible with Renault’s restructuring around these four brands? “Yes, precisely! We had the tool but not the strategy that went with it. In 2016, we broke down the partitions. I think I had at least two kilometres of them removed at the time! With the arrival of Luca, I think that creating teams with a belonging to each brand and with a manager for each of them will boost the design department. The tool is completely in phase. It just lacked the key piece: this reorganisation by brand!

Interview by Christophe Bonnaud during the eWays days. Thanks to Vincent Frappreau, press team for the A/B and Design segment, and of course to Laurens van den Acker for his availability.

And also, an analysis of the design of the Mégane eVision :