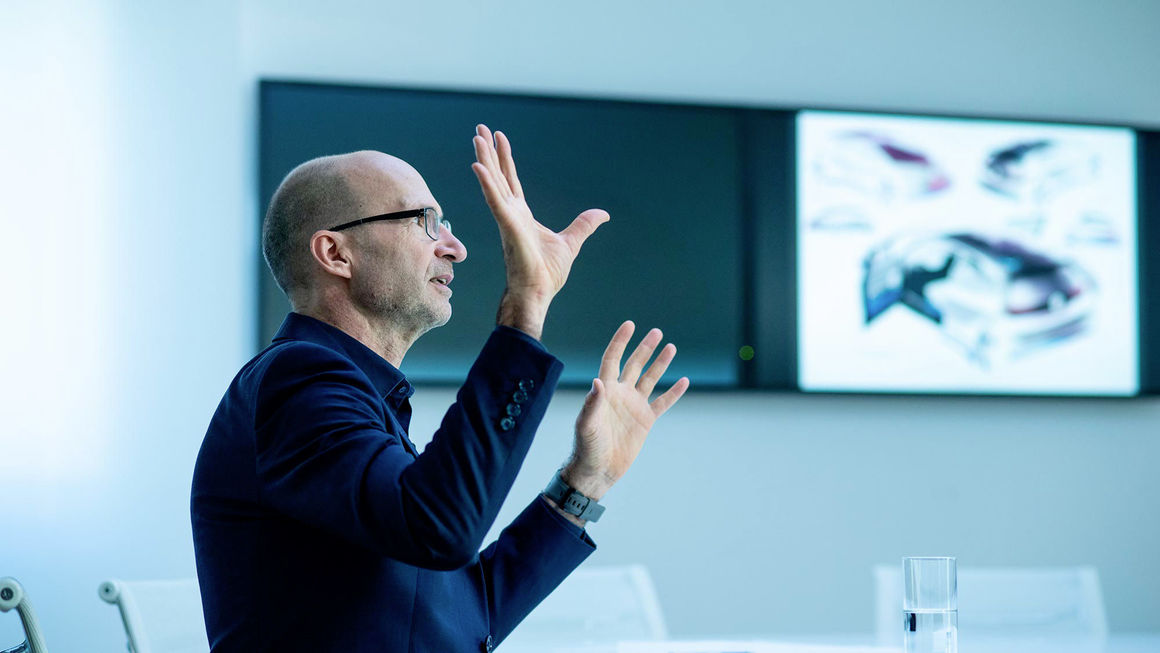 This is an interview conducted by com’ VW. Once watered down, it reveals some informations about this new ID family, whose first child will be unveiled in Frankfurt: ID.3. 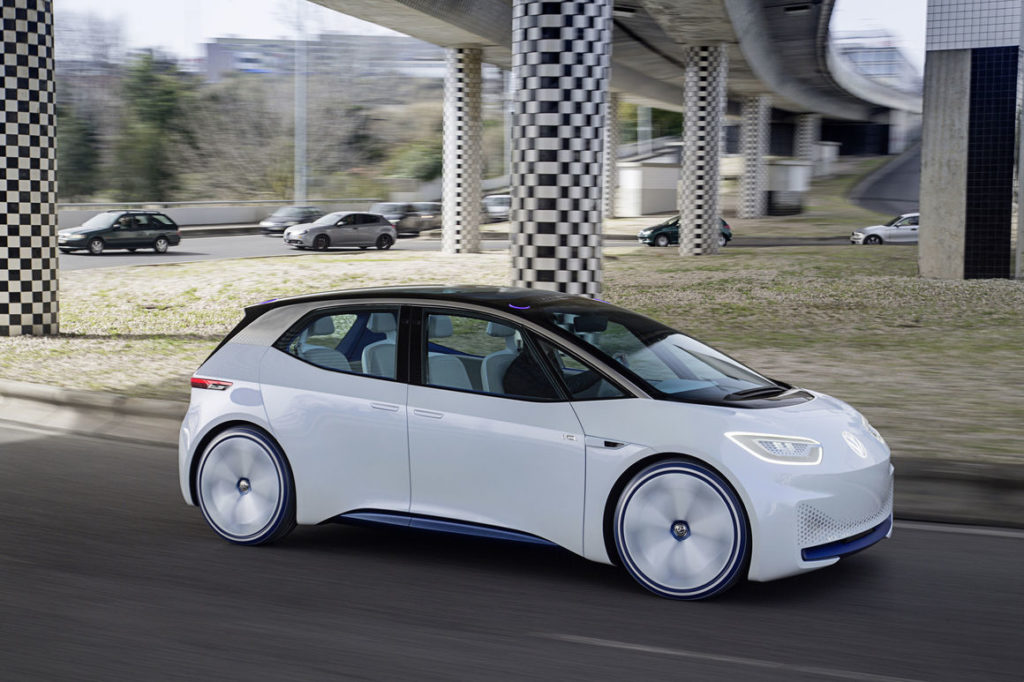 Klaus Bischoff, 57, and his team developed the design language of the new ID. family. It will be the first generation of electric cars from Volkswagen based on the Modular Electric Drive Toolkit (MEB).

Klaus Bischoff has been shaping Volkswagen design for three decades now. Born in Hamburg, he started his career as an interior and exterior designer in Wolfsburg in 1989. Since then he was responsible, amongst others, for the development of four model series of Golf and Passat, the SUV models Touareg, Tiguan and T-Roc, the small up! and the premium Arteon. But nothing was as challenging for the 57-year-old as working on the vehicles of the upcoming ID. family. Here, Bischoff, who has been in charge for the worldwide design of the Volkswagen brand with more than 400 employees since 2007, explains what new opportunities and freedom the E-era offers for car design.

Mr. Bischoff, electric mobility is also fundamentally changing the work of car designers. What is particularly new for you ?
Actually, almost everything is changing. The cards are being reshuffled – from the tools of the trade to the product itself. It starts with an element that has dominated the laws of car design from the beginning – the combustion engine – being taken out of the equation. This creates a new territory, a new freedom that must now be used. For a car designer like me, there is nothing more exciting. 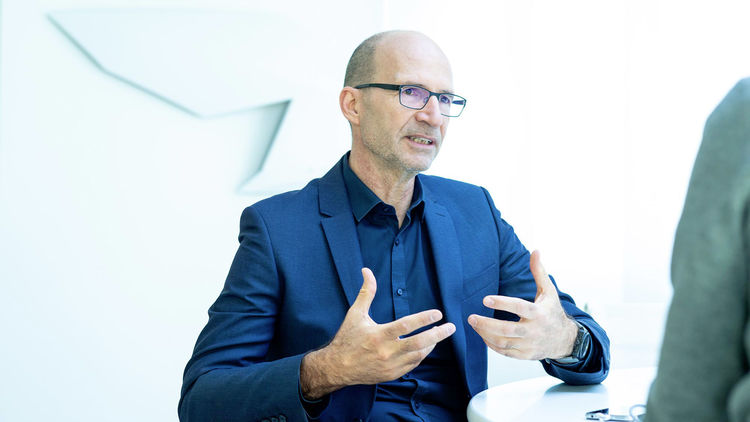 An electric car no longer has a big engine, but a big battery in the vehicle floor. What does this mean for the design ?
So far, around a third of the vehicle’s body has been occupied by the engine – hence the classic hood with radiator grille. Behind it came the occupants and the trunk: a layout that we have further developed over decades. Now a vacuum is created in one third of the vehicle that has to be filled. In addition, the vehicle now has a different foundation, which also changes a lot, for example you sit higher in the electric car. All of this, however, increases our degree of freedom considerably. On the base plate, into which the battery is embedded, we can arrange the occupants relatively freely and tailor the rest around them. This enables completely new product characters. 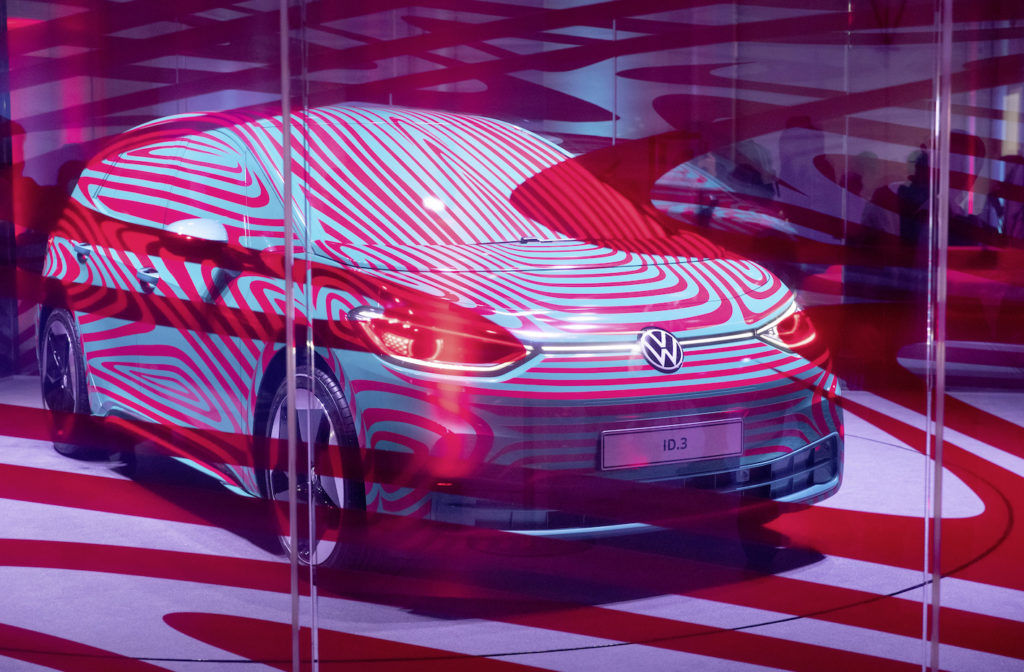 The heavy battery in the underbody also affects the driving characteristics of the car. Electric cars have a particularly low center of gravity.
Exactly. This also gives more freedom in the interior. Until now, the drivetrain and wheels had to be coupled, and there was always the center tunnel for the drive shaft. This has now changed and creates unimaginable possibilities in interior design. Through digitalization and connectivity, we can create new user experiences, new operating philosophies and a completely different driving experience.

In the past decades, car design was strongly framed by the requirements of aerodynamics and wind tunnels. Is this influence dwindling in the e-era? Or to put it another way: Will electric cars possibly look more striking and different ?
In any case, I believe that we will see a development leap in e-design that corresponds to the new technologies. This era offers us car designers the opportunity to act more disruptively, question routines and explore new territories. 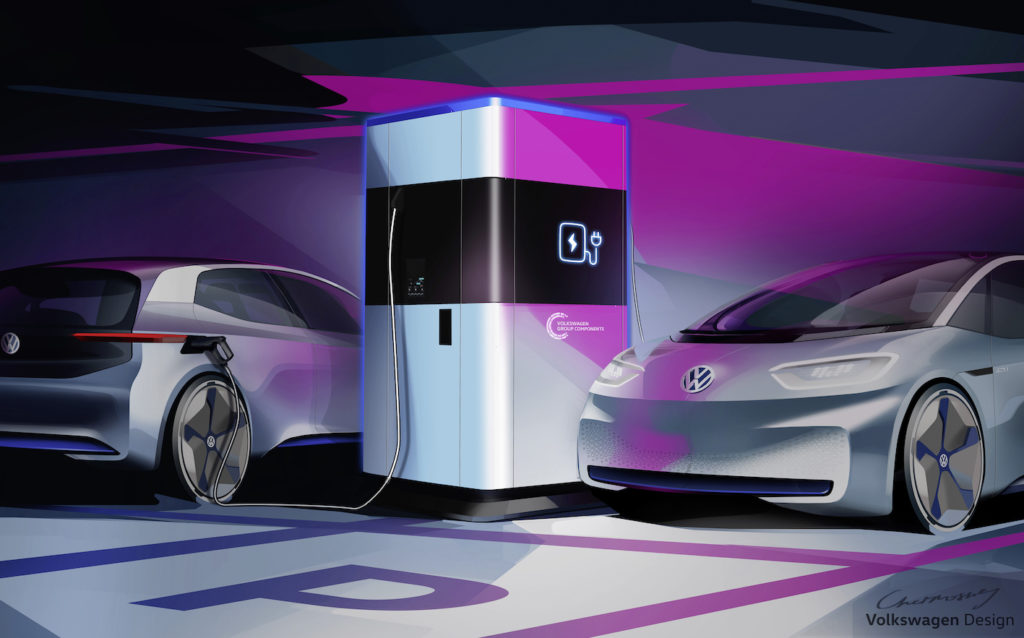 Can one say that in the e-era the interior of a vehicle is becoming increasingly important? Also because the car is evolving as a living space and digital assets offer new potentials ?
Yes, the car is changing from a driver’s workplace, i.e. an ergonomically optimized machine control system, to a fully networked living room. Voluminous fixtures are becoming lighter, slimmer and smaller in the course of digitalization. The air conditioning system no longer takes up as much space as before because most of it moves into the former engine compartment. All this results in more spacious, more valuable interiors. E-cars still need restraint and safety systems however. In the future, this will be achieved by autonomous driving – and thus create even more design freedom. 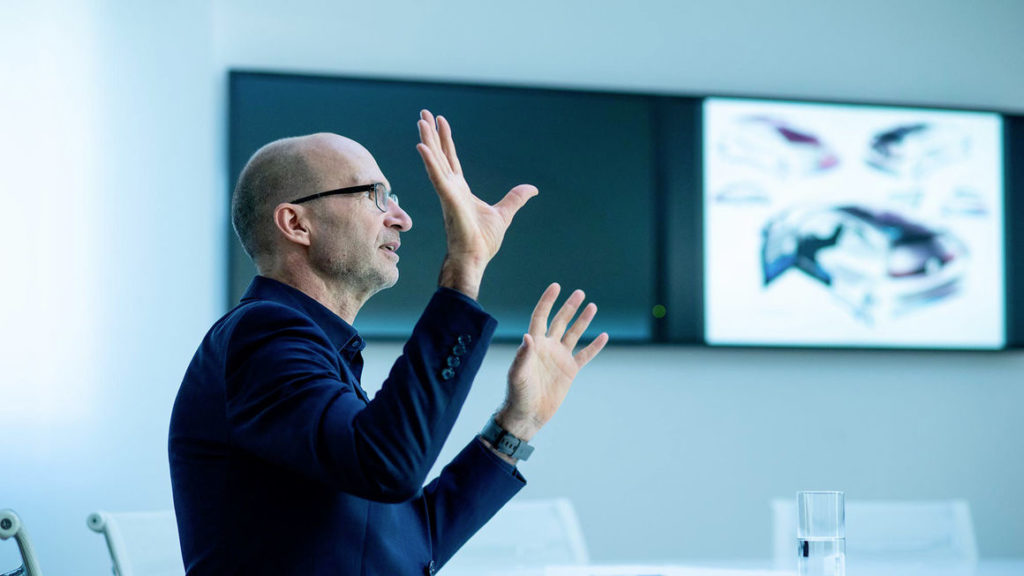 Is the real revolution yet to come with autonomous driving? Because with driverless mobility, the steering wheel and driver’s compartment will also be eliminated.
Yes, but there are still many steps to go. For now, we are doing everything we can, to make electric cars attractive for many people. The democratization of mobility has made Volkswagen great. Now we can offer everyone a journey that is more relaxed, quieter, more enjoyable and safer than ever. We have exciting times ahead of us. 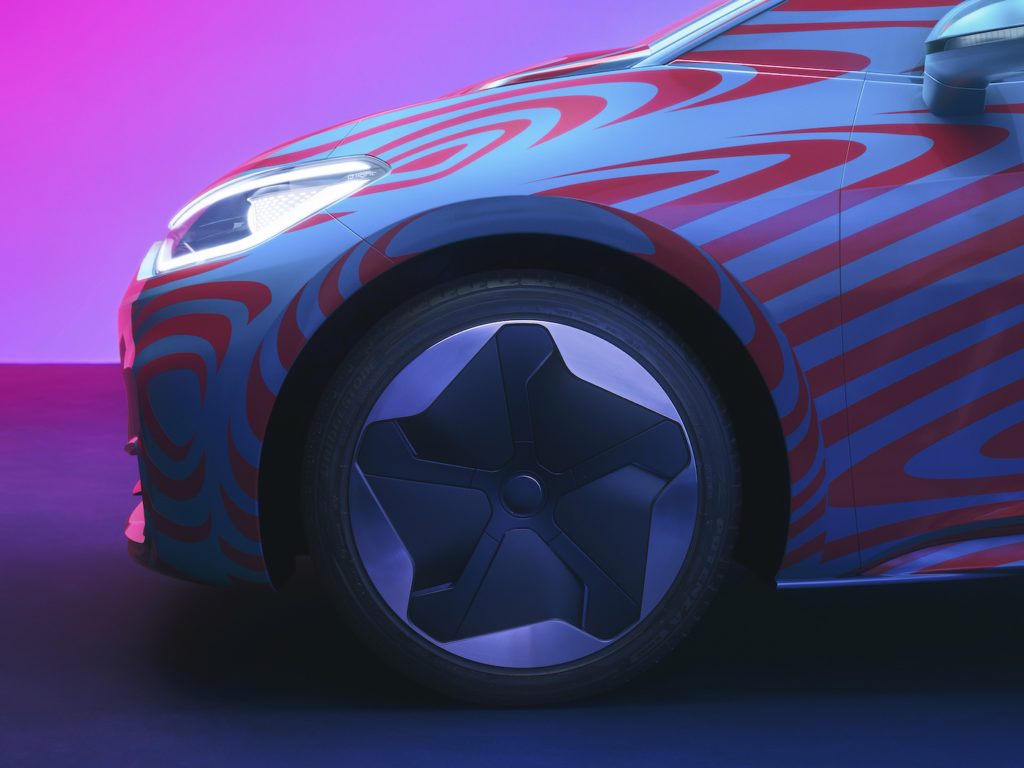 The new Volkswagen ID. will be launched at the beginning of 2020 – the first model of the MEB-based ID. family. What makes the difference of the “ID. DNA” for you ?
With the ID. we are trying to create a new e-family identity. Everyone on the street should immediately see: wow, that can only be an e-car! And the second thought: wow, that can only be a VW ! The ID. aura is likeable, unobtrusive and purist-clear. So drawn with a few, but very sensitive design elements. The form is very innovative, focusing on disruption rather than continuity. We want to present genuine e-personalities, also in order to reduce inhibitions about the new drive technology. And we always have democratization in mind. E-mobility for all. That is the claim.

Do you have a personal favorite ?
Perhaps the ID. BUZZ – because this vehicle uniquely combines the advantages of electric mobility with a unique brand-related design: the origin of Volkswagen, the myth of the original Volkswagen bus, completely reinvented.

Sound design also plays a new role in the e-era – surely an attractive task to equip a silent car with a sound that then becomes part of the brand identity ?
This is a new field of activity for seasoned car designers. Of course, we’ve already worked on sounds – but now an electric vehicle is virtually noiseless. With increasing speed, driving noises that today are masked by engine noise also become more present. Insulation is therefore important – and how things sound. We perceive every click, every touch, every actuation of switching elements more clearly. This offers undreamt possibilities. At the same time, customers will feel and recognize a brand more strongly than ever through the sound. Sound imitation is required by law. But I would like people to recognize from the sound alone: an ID. just passed by!

How should a Volkswagen sound in your mind ?
Every Volkswagen needs a sympathetic, friendly and reserved presence. In other words, the opposite of aggressive, intrusive, annoying. This requires a sound design that won’t get on your nerves even the tenth time and makes the day more pleasant.

Digital vehicle tools are becoming increasingly important in the e-era. Does this result in closer cooperation with software developers and UX designers for your work ?
We designers today need a holistic approach. It is about much more than pure vehicle design. We ensure across all touch points that people find a coherent brand philosophy. For example, I need to know – and design – how a Volkswagen feels on a smartphone. How I can operate a feature so “seamlessly” via a tablet that it feels exactly like it does in the car, with the same sound, the same graphics, design and navigation. Our field of work has expanded considerably.

Must tomorrow’s car designer be a UX designer more than ever ?
UX is rather another facet of the generalist claim this profession has today. You can’t get very far with pure design. You need a deep understanding of brand values, product identities and digital fingerprints. 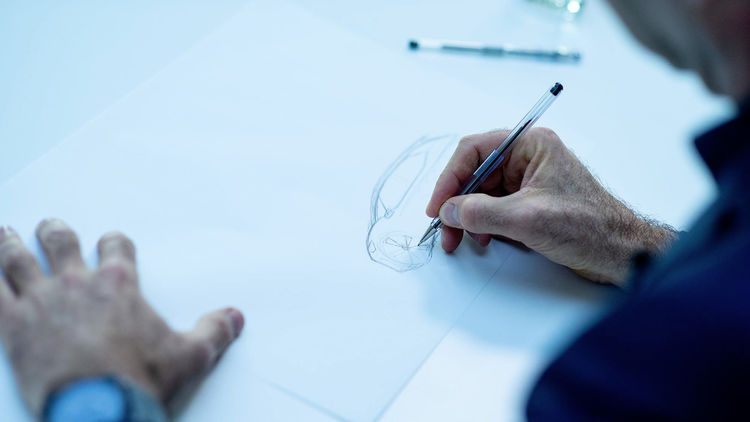 What role does augmented reality play in your everyday life today ?
The working methodology has also changed. Of course, everything starts with a visualized 2D idea, whether on tablet or paper. But the leap into the third dimension is much faster and more direct. I put VR glasses on, make a three-dimensional sketch, and the team and board members can sit down together in the virtual vehicle body. And if I like it, I can send the draft directly to the wind tunnel and have the Cd value checked. In the past, such steps took weeks and months. The digital workflow makes us more agile and efficient. Which is all the more important because my teams are based in Wolfsburg and Shanghai, São Paulo and Mexico City.

So when Mr. Diess asks: “What about the ID. CROZZ, Mr. Bischoff?” Then you hand him some glasses and say: “Just sit down and have a look, boss!” ?
Yes, he has already done that. And to be honest, he thought it was pretty good.