Discover the genesis of the Peugeot 208, from 2013 to 2019. Or how, one year after launching the 2012 208, Peugeot was already thinking about its successor ! Read again the interviews of the designers of this heiress of the 205.

In 2013, the P21 programme was launched. For the moment, it is only a question of gathering a very small team of about ten people. An opportunity to outline the possible paths for the renewal of the 208, which is not even a year old !

Because the 208 of 2012 is in the news. For her, Peugeot has embarked on a breakthrough program with the 207. More compact, lightweight and above all, adept at almost monovolume proportions, this 208 was developed under the name of the A9 project. It is the first of the new era in design since Jean-Pierre Ploué reformed the teams dedicated to Peugeot and Citroën.

The A9 program is compact, nervous and the front block very restricted. There are already the depressed wheel arches that will be included in the 2019 P21 project. The sides are relatively sober, if not a tightening at the bottom of the body : the suit must be curved, you have to remove some material ! Also note the folded line from the front handle to the tail light. The sides of the 208 in 2019 will be much more complex !

From 2013 to 2015, the P21 project must first answer a question : should it follow the “one box” path of the A9 project or, on the contrary, regain more “car” proportions, with a long, muscular bonnet, a remote cabin and borrow the codes of the 205 updated ? Scale 1 polystyrene models are therefore made to convince themselves of the way forward. The second solution was finally adopted and from the A9, the P21 retained practically nothing. Except for the name 208.

To get this message across internally, without revealing the lines of the 2019 208 P21 (which are still far from being fixed), Peugeot decided to introduce in 2015, the Fractal concept car designed by Sébastien Criquet. Its message is not to evoke the future 208 and yet internally, it is the P21 program that appears as a watermark, particularly its new, more classic architecture (engine bonnet, remote cabin) and its sporty side, but here with proportions that are at their height.

The style evolves and the themes of the Fractal guide (a little) the minds, in the absence of pencils. The proportions of the P21 project are clearly in place and the work on the sides requires a lot of research in the already suggested convex concave volumes. The stampers don’t know it yet, but they’re going to suffer !

The sporting spirit of the Fractal will therefore inspire the standard P21 program. Each Peugeot concept car unveiled since the early 2010 has been used as a manifesto for a series model or for themes selected on several products in the range….

For the 208 of 2019, the designers are pushing this theme of sportsmanship quite far, as can be seen in this proposal above, with a very sloping rear panel, taking the door jamb into a very dynamic movement… On this model, we notice the desire to extend the rear light band on the rear panel with an arrow shape. Finally, on the standard version, this extension will take the form of a sharp edge that blends into the volume of the wing, a theme that we find on the concept car e-Legend !

The front also finds its inspiration in different concepts. The “claws” theme also shifts to the front of the vehicle. It’s totally new on a small Peugeot. The dynamism of the car is expressed first of all by its proportions but also by many volumes very well worked out as on the bonnet or the sides.

The P21 program is important for the group and the human and financial resources are solid ! Many scale 1 models will be produced in order to evaluate all the proposals and opt for the most coherent but also the most daring solution.

In parallel with the development of the P21 program, the technique develops the new CMP platform that allows the 208 to install its new proportions with a rear windscreen, a long hood, a forward rear crossbar, etc. But it is only in 2015 that the choice of the multi-energy CMP platform is validated. Whatever the case, Peugeot is pushing the sliders in parallel : on the one hand, the development of the P21’s style and on the other, the transformation of the platform that can now receive a 100% electric or 100% thermal powertrain !

The style was frozen in 2017 and Peugeot moved from the clay to composite models. With a rendering that represents, two years beforehand, what has become of the 208 in this year 2019. Below, it is this model that was presented on the roof of the PSA design office… 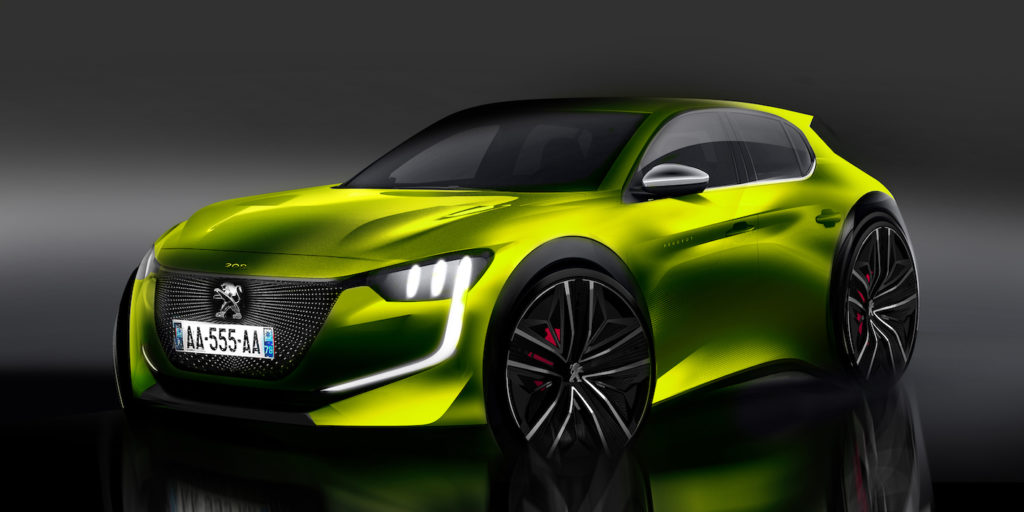