The Peugeot Inception concept is the manifesto of Matthias Hossann’s team – Peugeot’s design director since July 2020 – which announces a breakthrough and a new era for the manufacturer. It also evokes for lovers of design, architecture and automotive innovation, quite a leap forward from the last e-Legend concept of 2018. However, both concepts were followed by Matthias Hossann, who was responsible for the concept cars at the time of the e-Legend. While the latter was designed by Nicolas Brissonneau for the exterior, it was Maxime Blandin, headed by Sébastien Criquet (author of the design of the current 308 saloon), who designed the Inception Concept, with Guillaume Lemaître for the interior. Maud Rondot is in charge of colours and materials, which are very specific and innovative for this 2023 concept car.

So can we talk about the Inception Concept as the ‘big’ sister to the e-Legend that was so popular in 2018? You can make up your own mind, because our ambition here is only to mark the conceptual developments that have taken place in five years.

While the proportions are quite different, the aesthetic themes are similar in some areas, such as the sides, the structure of the bow with similar bumper contours and a sharp, feline look, yet they are treated differently from each other. Let’s not forget that the e-Legend is a reinterpretation of the 504 coupé, whereas the Inception Concept is free of any historical reference since it projects itself solely into the future.

The three light bars that originated on the 504 coupé have of course been carried over to the e-Legend and resized on the Inception Concept. They are integrated into the large glass panel that covers the stern, echoing the new “fusion mask” of the bow that will be used on future Peugeot cars.

The profile of both concepts is very automotive. But while the e-Legend is still based on a classic architecture despite its electric engine, the Inception Concept creates a spectacular atmosphere when you switch to a top view to discover a completely redesigned interior thanks to the possibilities offered by the new e-Native platforms of the Stellantis group

Another common feature of the two concepts is the windscreen with two windows on either side. While the e-Legend offered a real evolution in terms of seating, the Inception Concept revolutionises the automotive habitat of the future. All seat proportions have been reworked, with more width and immersive comfort: the Comfort Fit. The architecture and the apparent structure of the seat are adjusted as closely as possible to the body. It is no longer a question of sitting in a car seat, but of settling into a new type of furniture, adapted to the conditions of dynamic driving, or in a calming mode during driving delegation. The headrests do not extend beyond the beltline. The low seat height allows for this new architecture, which frees up space.

While it’s fair to say that the first i-Cockpit appeared in 2010 in the Peugeot SR1 concept (see below), it was the first generation 208 in 2012 that inaugurated it in series. Then the Quartz concept car took it a step further with a 3D digital instrumentation adopted on the 3008/308 and even 208 later on. Today, the Inception Concept propels this architecture into the heart of the 2020s as the Hypersquare will replace the steering wheel (see Inception Concept topic). The e-Legend can’t compete with its big sister, which doesn’t have a crossbar and dashboard.

Below, you will have to get used to driving – sorry, driving – the Peugeots of tomorrow with this Hypersquare, for which tests on prototypes have already begun. Peugeot has announced that it will be available in 2025, probably on the future generations of 208 and 2008.

Both concept cars also share the ability to charge via induction. But the Inception Concept benefits from the STLA Large platform with its two electric motors, four-wheel drive and 680 hp. The e-Legend is only 460 hp.

While the e-Legend visually welcomes you into a cabin that expresses its comfort at first glance, the Inception Concept has decided to revolutionise its own and it will take you a few seconds, or even minutes, to feel its full generosity. But there’s no doubt about it, you’re sitting low and the windscreen, which drops down to your feet, offers you a view of the journey that you’ve never had before…

In short, the Inception Concept can be considered the e-Legend’s big brother, considering its size! The leap made in five years is phenomenal in terms of technology (what an evolution this Hypersquare is) and, more logically, more moderate in terms of style. Logically, the DNA of the brand is preserved. Above all, we must salute the aesthetic audacity of this very high-tech bow, and the design prowess that has been able to dress up the new STLA platform with a spectacular cabin cell, topping a cabin that is just as spectacular! 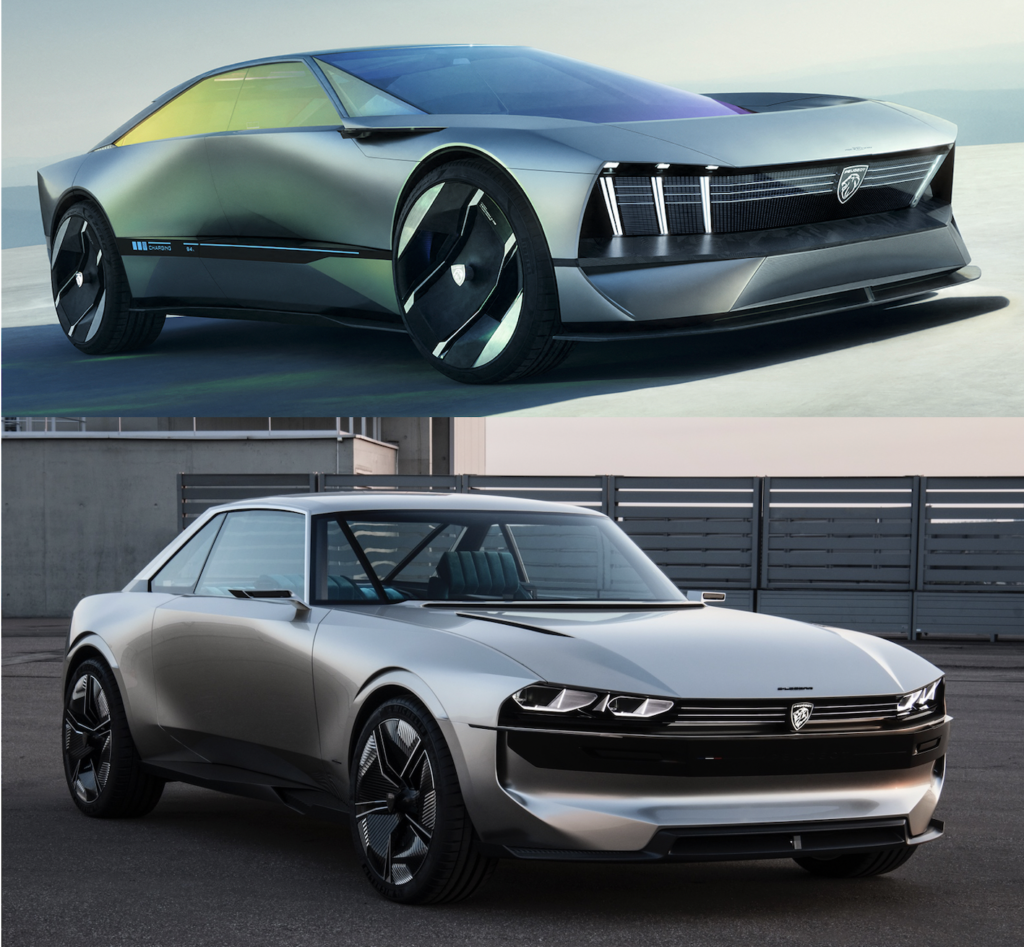