Welcome to the C5 X. You are allowed to touch and feel the materials, to hold the steering wheel, which has a thick foam element, as do the armrests. But you won’t be allowed to have clear upholstery… Hélène Veilleux, responsible for materials and colours at Citroën, guides you through this cocoon of five (real) seats.

Hélène Veilleux trained at the Duperré school (https://duperre.org/) before joining the Habitat design studio. Twenty years ago she joined the PSA group, now Stellantis. After a period at Peugeot, where we met her for the genesis of the BB1 concept car (below, second from the left), she was appointed by Jean-Pierre Ploué, one of the group’s two style directors, as head of colours and materials at Citroën in 2014.

Is this new technology reserved for Citroën? “Yes, absolutely. We have applied this decoration with this laser cut effect. The chevrons can also be found there. It is a design specifically registered for Citroën, but the other brands in the group could eventually adopt the technology, but not the appearance.”

The C5 X is a large D-segment car, a segment that has its own codes, quite different from those of SUVs or compact saloons. For example, there are only three variations of the design. “One of them is called Gun Metal and has a carbon effect, but you can opt for a brighter finish with aluminium decorations. The dashboard, meanwhile, has a choice of two different chevron grain strips, one classic and one with a grey-green colour.” This piece that structures the middle of the dashboard is called the “muscle” by interior design.

Coming back to our CXperience reference, we are surprised not to find more light colours on board, not to mention the yellow of the concept! “You mentioned the positioning of the C5 X in the D segment, hence our reflection which led us not to retain the yellow of the concept! We focused on the ambience with coloured greys and above all, we liked to propose a slightly subliminal reading of the chevron on numerous supports: the chevron is found in the perforations of the seats, on the strip at the top of the backrest, on the identifying stitching. All this while remaining very discreet. When you look at the seat from the front, you can make out the chevron pattern, which is also found on the seat cover decoration, for example. It was a great playground!”

This is a playground that can be found on the recently restyled C3 Aircross. “It’s effectively the same vocabulary. We have to tell the same story and bring the chevron signage to all our vehicles. This consistency allows customers to see that there is a creative thread running through our range. We have to keep feeding it with new ideas. It’s a bit like the idea of a label in high fashion.” Because of its relatively limited volumes compared to the B segment (C3/208/Clio) or the C segment (C4/308/Mégane), isn’t the D segment the ideal terrain for daring to integrate new colours? “Above all, we have really tried to emphasise details and subtlety rather than using very saturated colours. On board, we have the possibility of having the seats topped with a very elegant Sapphire blue leather (below).” But there are no light upholstery colours, like on almost all the C5 X’s competitors.

Surprising? Not according to Alexandre Cazeaux, the project manager: “Clients want leather and when they choose this material, they want it in black, that’s how it is and it’s a must. In the initial specifications, I didn’t want black leather, but the tests imposed it! After a while you have to offer what the customer wants. We try to have more colourful things, and Hélène and her teams have worked on these themes, but what we can afford on the C3 or C4 is not possible on the C5 X. We did a lot of testing on this programme, notably by dressing the door inserts in Sapphire blue, and even other elements towards the console, but it didn’t work in tests.”

Let’s get out of the comfortable cocoon of the C5 X and talk about the body colours. They are limited to six for the big Citroën, which is in the low range of the category. One of them is the blue of one of the two C5 Xs that were made available to us. A new launch colour? “No, even if we are still fighting to have an emblematic colour. But there’s no point in developing one if there’s a colour in the group that does the job!” Hélène Veilleux replies. “This blue is not new to the group, but this is the first time it has been used on this type of silhouette. It’s a strong choice. With this colour, you also have the confirmation of a real coherence between the exterior and the interior with the Sapphire blue in the upper part of the seats. The same is true of the Smart Grey body colour and the grey-green leather upper backrests.”

The last longer-term question: the trend is to end the use of bovine leathers. Can we imagine other materials in the longer or shorter term? “First of all, let’s be clear. At Stellantis, we don’t kill cows to make leather, we use leather from cows that were raised for meat,” says Alexandre Cazeaux. As for future materials capable of replacing bovine leather, Hélène Veilleux is working with her teams and equipment manufacturers “on synthetic materials, fish, mushroom and even pineapple leathers, but they have to pass a lot of tests before they can be validated one day for the series! There is a lot of research because our brand manager pushes us to find alternatives.” 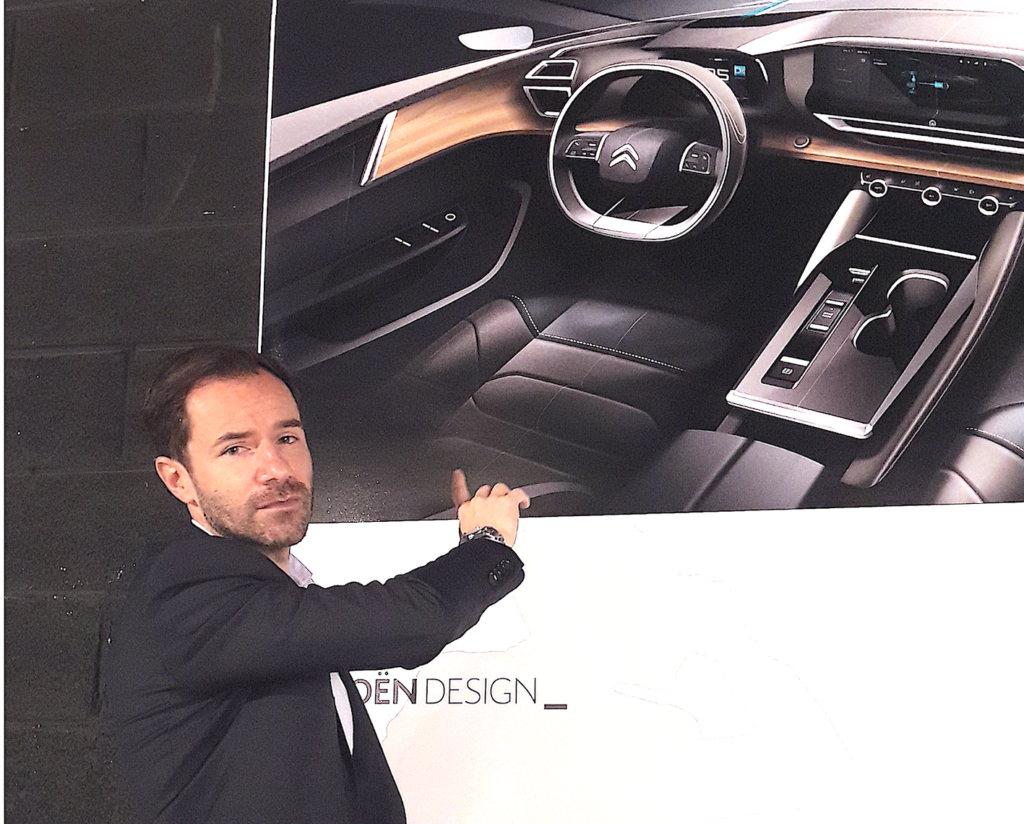