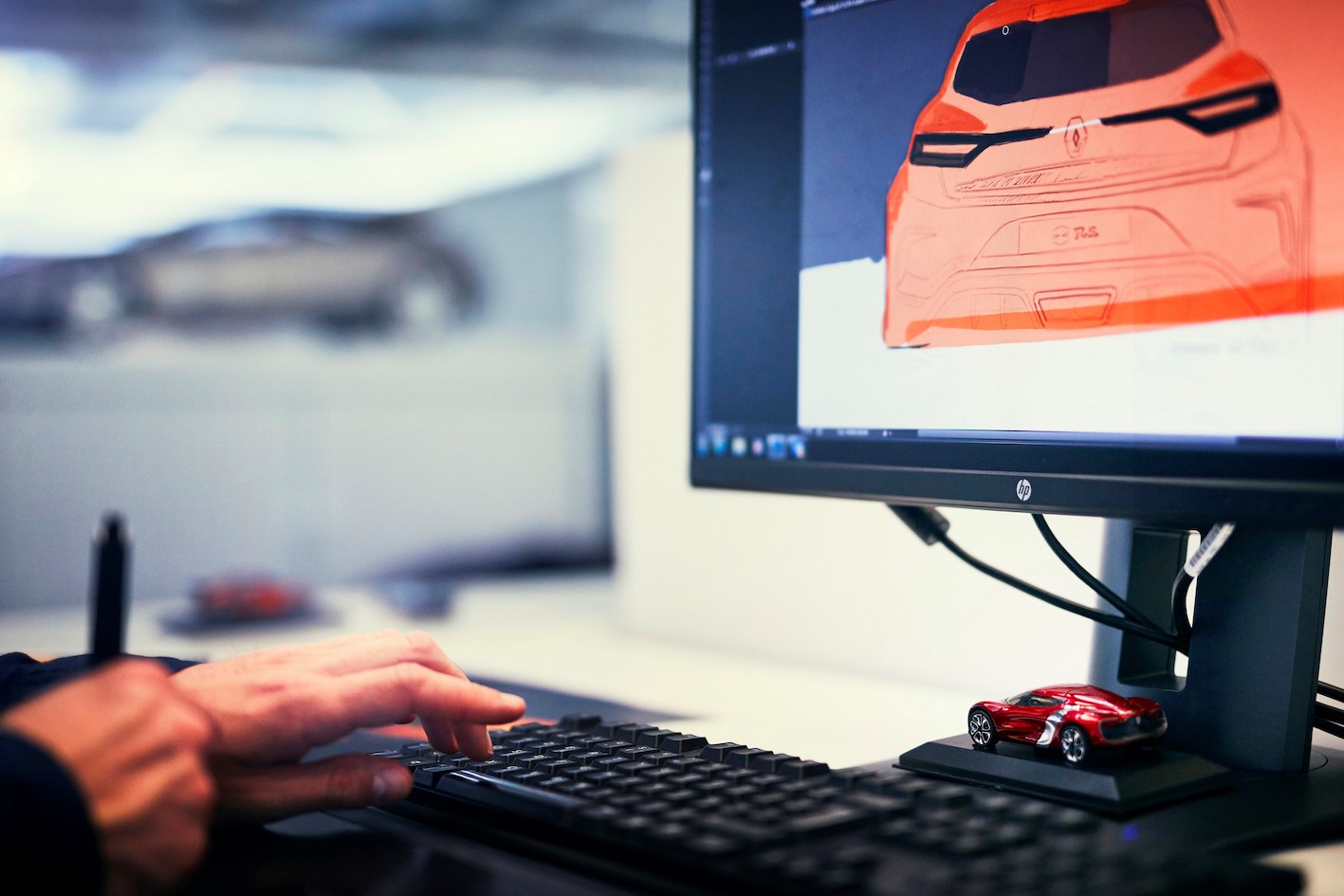 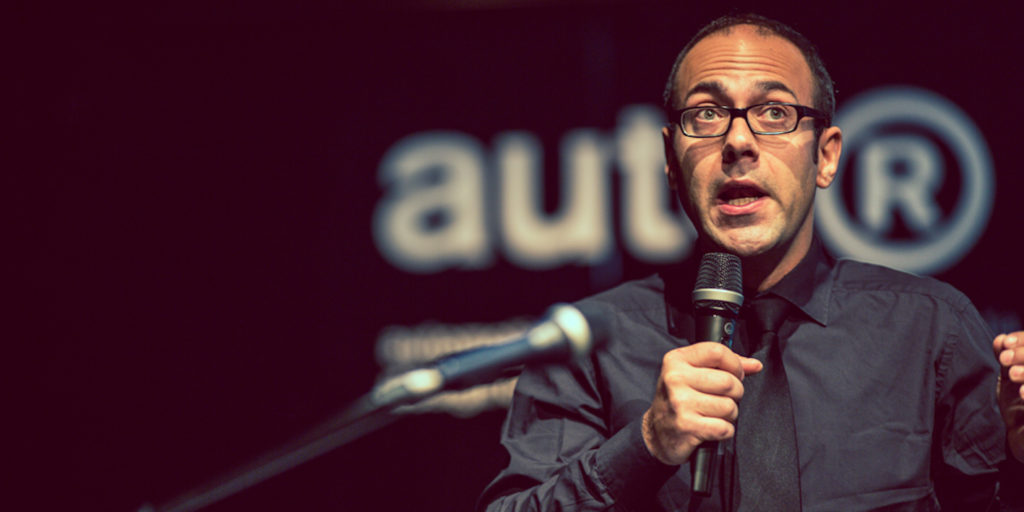 Philip Nemeth was in charge of the Transport Design section at Strate for 8 years, he teaches at Rubika-ISD schools in Valenciennes (and in India), at the SDS “The Sustainable Design School” (of which Patrick Le Quément is one of the founders) and is the curator of the concept car exhibition at the International Automobile Festival. He is also the head of his company Philip Nemeth Consulting. He is the ideal speaker to discuss the training of designers in French schools and other aspects of the design profession.

LIGNES/auto : Can we say today that the training of students in the profession of car designer is good in France ?
Philip Nemeth: “Yes, I sincerely believe that it is of high quality. There are very good schools in France including Ensaama, Strate, Rubika-ISD, Créapole and SDS “The Sustainable Design School” (*) 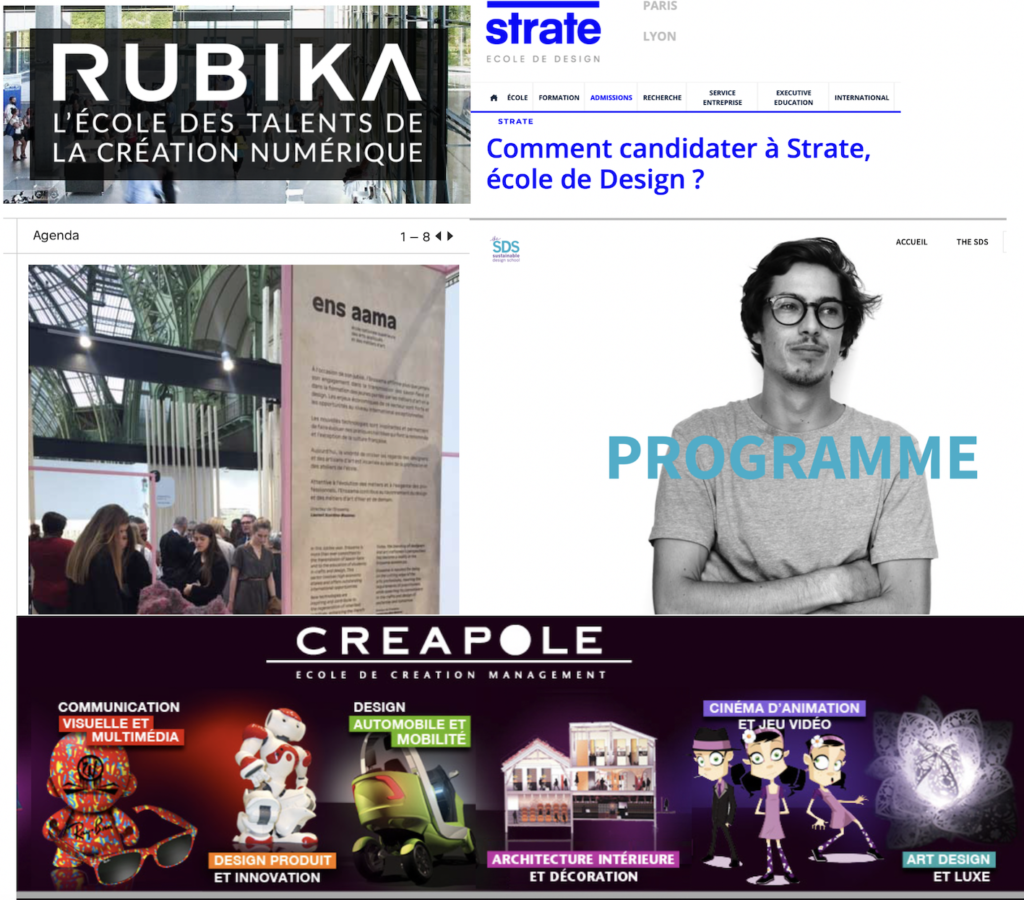 You know Strate particularly well because you managed the transport design training there for eight years !
P.N.: “Strate’s strength lies in its long history with an established network and many of the school’s graduates who now head design centres all over the world. And Strate can now rely on its “framework” agreements with Renault.”

Should we still talk about “design transport” training ?
P.N.: “No, these training courses are now opening up to the outside world, it is now more appropriate to accept that we no longer talk about ‘transport’ but about ‘mobility’. » 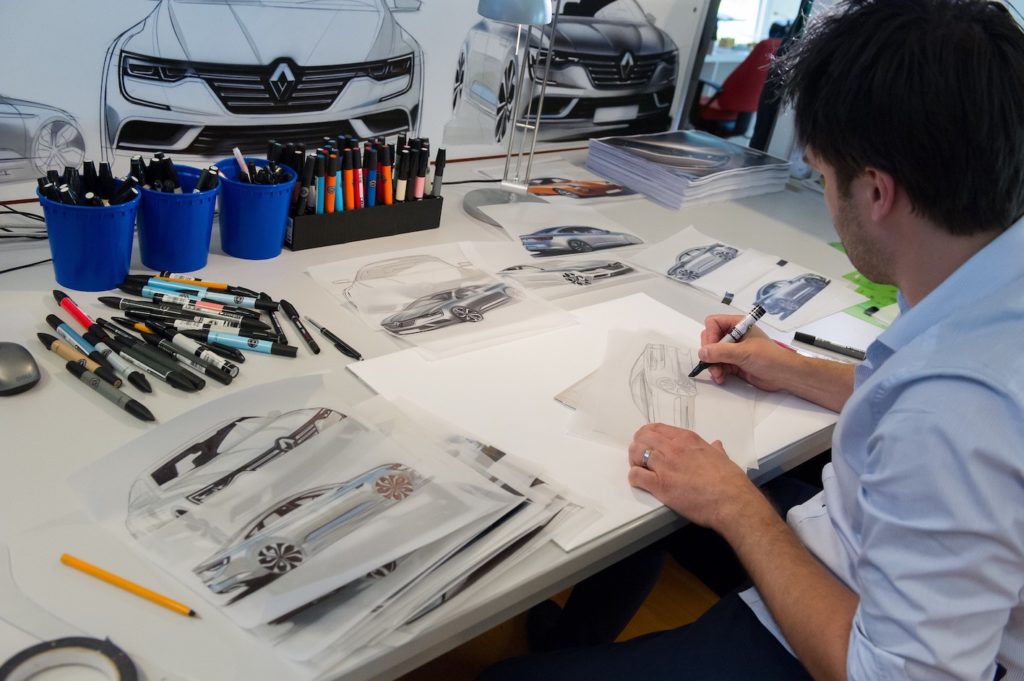 There is a lot of talk about the ISD (Rubika) in Valenciennes. What are its assets ?
P.N.: “I served as Director of Studies for one year. Today, Rubika-ISD in Valenciennes is the conjunction of three ‘grandes écoles’, one of which has a world-wide reputation in training in video game creation, and another is specialized in animation cinema. In what is called the “serre numérique” there, the school is redesigning its various training courses and developing a common core to mix young people who want to design video games and those who want to design cars. Not everything is yet fully operational, but this mutualisation is extraordinary.”

Laurens van den Acker, Renault’s design manager, said he had difficulty hiring designers for HMIs. Don’t these young people, who are more oriented towards video, ideally fit this job ?
P.N.: “Absolutely. To create HMIs (human-machine interfaces) in the automotive world, it is good to have young people in your teams who have the same sensitivity as video games, especially for interaction design. Renault has already felt it by drawing on this pool rather than that of car designers.” 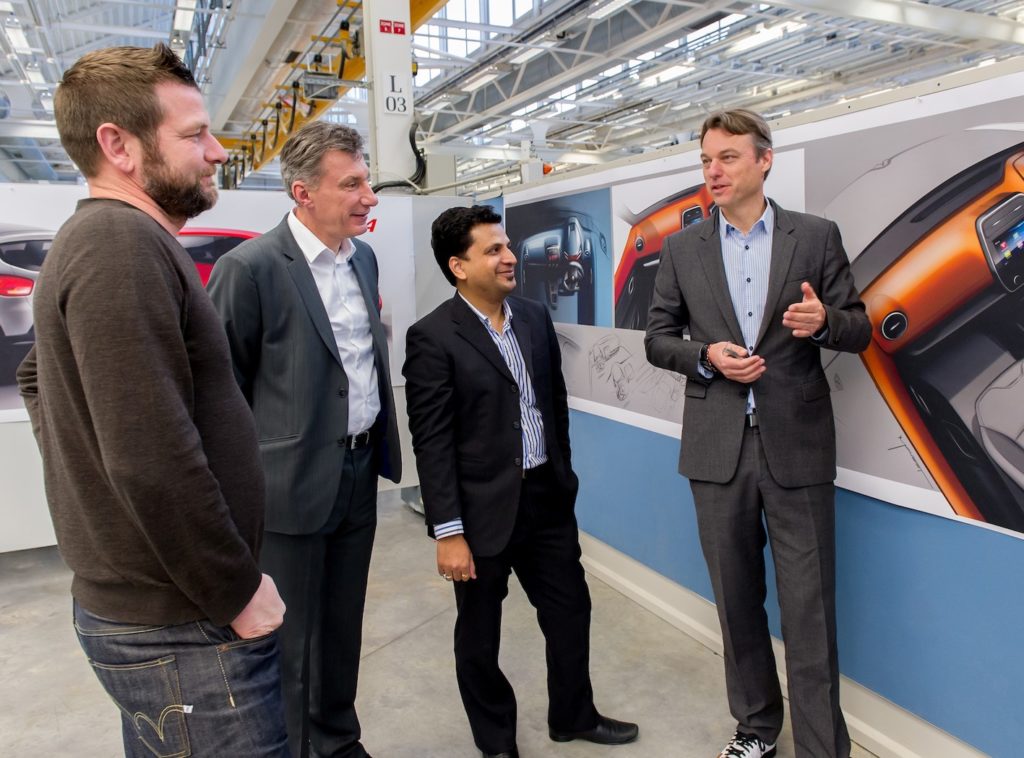 It is not the same job for these young people who have chosen the world of video games ?
P.N.: “It is as complicated for manufacturers to find candidates as it is to explain to first or second year students in video games that their potential employers could be an automobile manufacturer ! ”

Can we say that the HMI field has become essential and joins in skills the exterior design studios, those of the interior and those of colors and materials ?
P.N.: “It is indeed a new entity but absolutely essential now. Design offices are no longer at all like those of only thirty years ago ! To sum up, at that time, the best designers executed the exterior design, the worst took care of the interior and the material colours were delegated to the two or three women present at the very end of the process. “(NB: this is a caricature here, of course !)

A radical but logical change….
P.N.: “Yes, and that changes everything. I will take the example of the Peugeot Fractal concept car (below) where the starting point of the project is matter and sound. The inter designer is then put forward more than his colleague from the outside ! ” 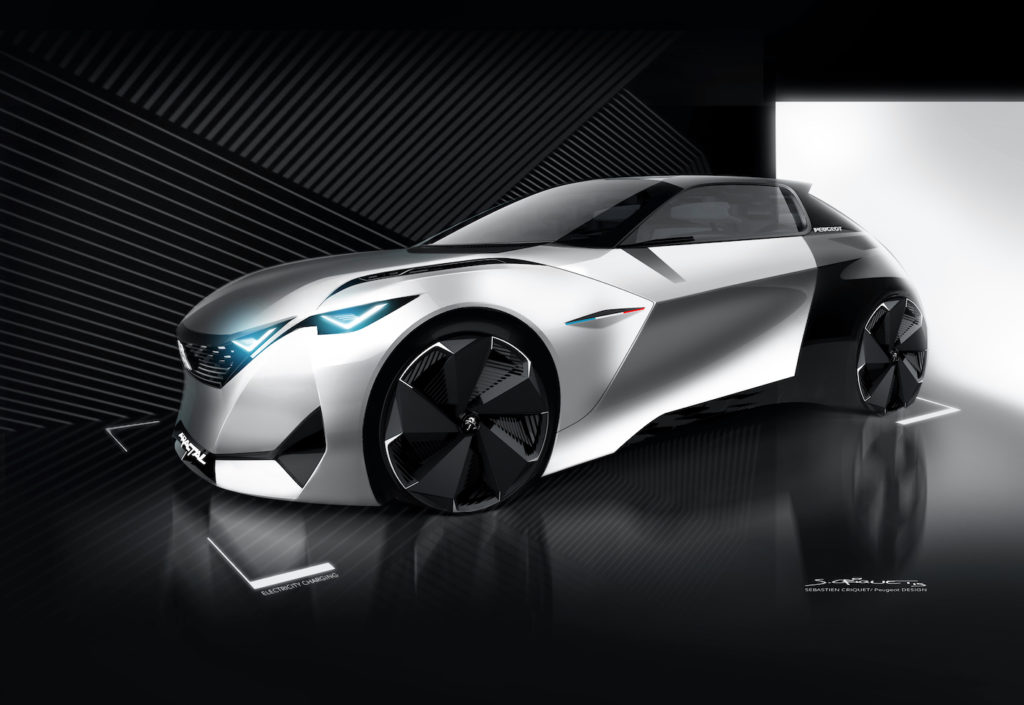 Are there any training courses for color and material designers ?
P.N.: “No, and that’s good ! They should not be formatted. These people come from different backgrounds and not necessarily from the automotive world. That’s their strength.” 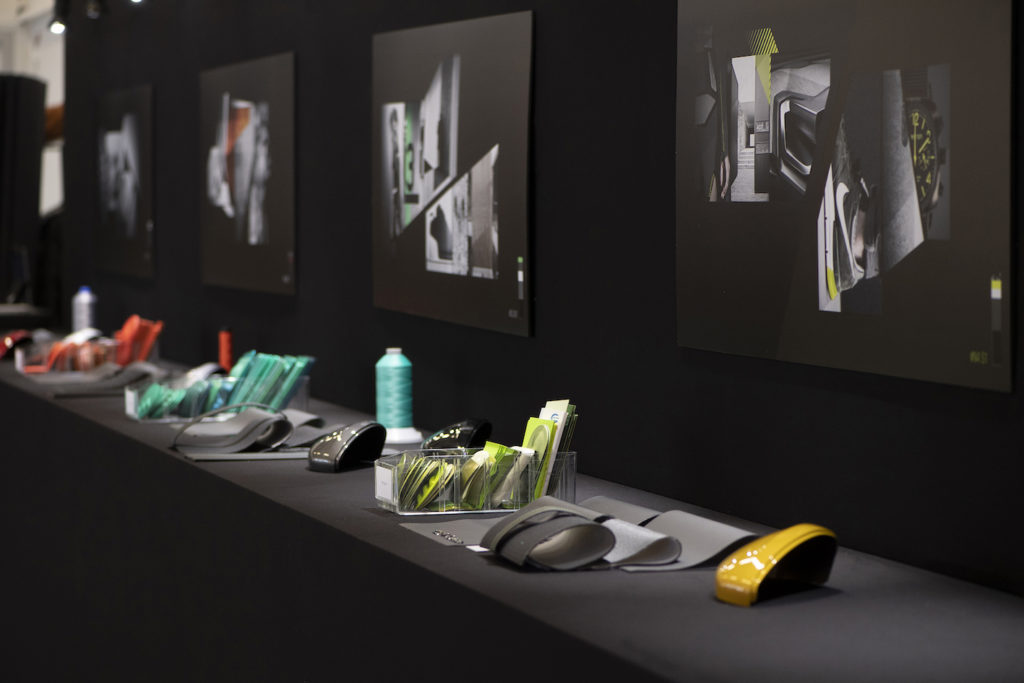 On the contrary, the external designers who leave the schools seem to me to be very formatted ?
P.N.: “Yes, but we still know how to spot the very good ones ! And then to be selected for an internship or a job at a manufacturer, everything is based on the portfolio. And the key to success is a graphically designed portfolio. For an internship, the selection is done in just one minute, just enough time to review the file. Graphically superior students are necessarily more likely to have the job.”

It is nevertheless regrettable, because the job of designer is not just drawing, it is the audacity of a concept, a clear vision of mobility…
P.N.: “It’s quite a shame indeed. I recently saw a young man in his third year at Valenciennes (Rubika-ISD) whose extraordinary work I found extraordinary because of his open-mindedness, his ability to present scenarios, his altruism. I congratulated him and he looked at me surprised, because he had just seen a designer from an equipment manufacturer for an internship who told him that he was not graphically ready, and that he had no place in the industry. I thought it was crazy !” 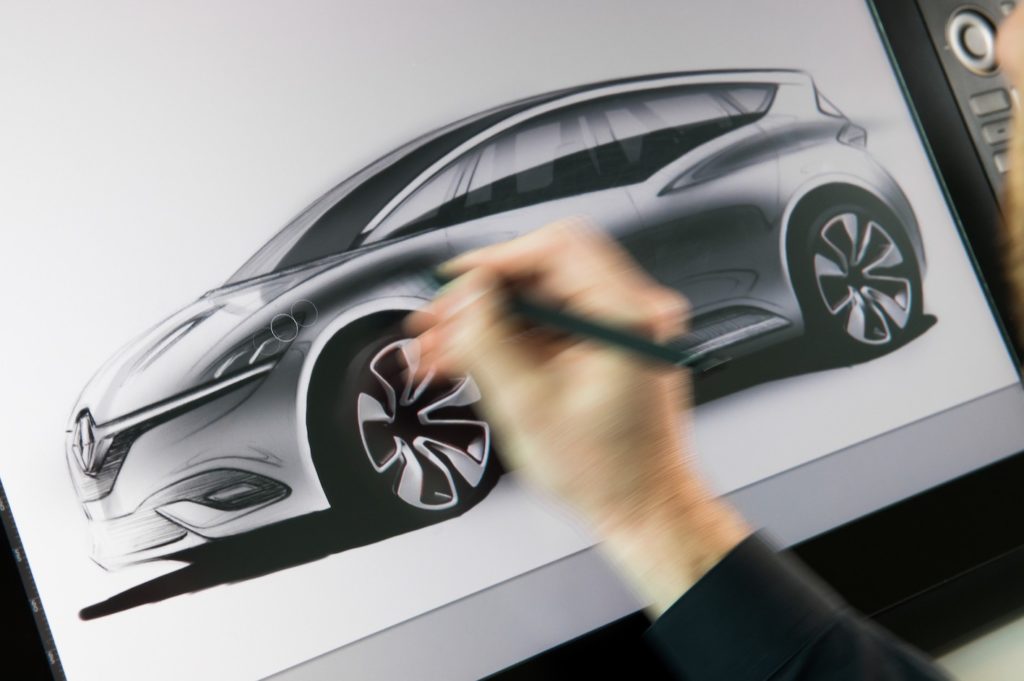 One might think that a student would be noticed for his visionary and conceptual quality, rather than for the beauty of his drawing ?
P.N.: “The automotive industry is on a just-in-time basis, and when it looks for an intern, he or she must be ready to use, able to do 3D immediately. There is indeed little room for more open-minded students. Personally, I like drawing, good drawing, not formatted, not retouched by Photoshop. But the designers who sometimes choose the interns are of the old generation. It’s not pejorative, but these designers tend to neglect this type of portfolio, this much more open approach. It’s always like that, and it’s unfortunate because there’s room for these less technical students who come out of the mould and have a real “mobility” approach. However, the new designer is often hired for his or her graphic skills alone.” 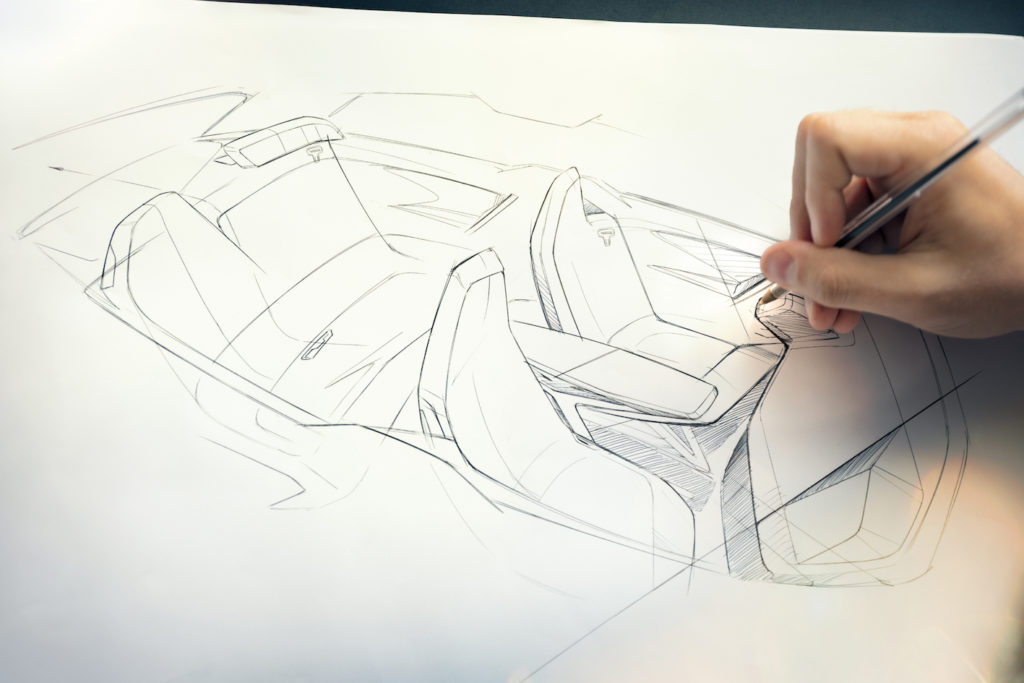 We mentioned Strate, the ISD but can you tell us about SDS recently created and one of its founders is Patrick Le Quément ? Do you work there ?
P.N.: “Shortly after leaving Strate, Maurille Larivière, who had been the pedagogical director of Strate for eighteen years, hired me as a drawing teacher at the very beginning of the SDS school adventure. I was the first year in the role of Director of Studies at SDS. Then I taught in a partial way, without being permanent.”

Is this a school to put on the list of candidates for the job of car designer ?
P.N.: “It’s a somewhat different school. In five years, its system has trained not car designers but “global” designers who have a vocation to work in innovation, with this “sustainable” ambition that pushes them to integrate an environmental dimension. Its advantage is to accept designers from different backgrounds, including marketing and engineering. There is a great diversity in this school. In addition, all students are invited to enter into partnerships in the first year, without waiting two or three years. This transversality is very interesting.”

Marc Van Peteghem, who is one of the three founders with Le Quément and Larivière, is a great naval architect. Could SDS have become a school of naval design ?
P.N.: “It’s true that many people ask me if there’s a naval design dimension here. But what is paradoxical is that Marc van Peteghem did not necessarily wish it, it seems to me, whereas it was a reflection at the very beginning, when it came to creating the school.”

Is there a naval design school in France ?
P.N.: “To my knowledge, no… ISD has a partnership with a school in Italy that has specific training in this field.”

The world of “design transport” is no longer the same as before. SDS must take advantage of this with its openness to sustainable design !
P.N.: “The “transport design” courses at Rubika-ISD or Strate are now much more open to the issue of mobility, and students do not make many cars after all !  What is paradoxical is that in the SDS school where I teach drawing classes, there are a number of students who draw cars. I ask them why they enrolled in this school, and they often tell me that it’s because there’s Patrick Le Quément ! (below)” 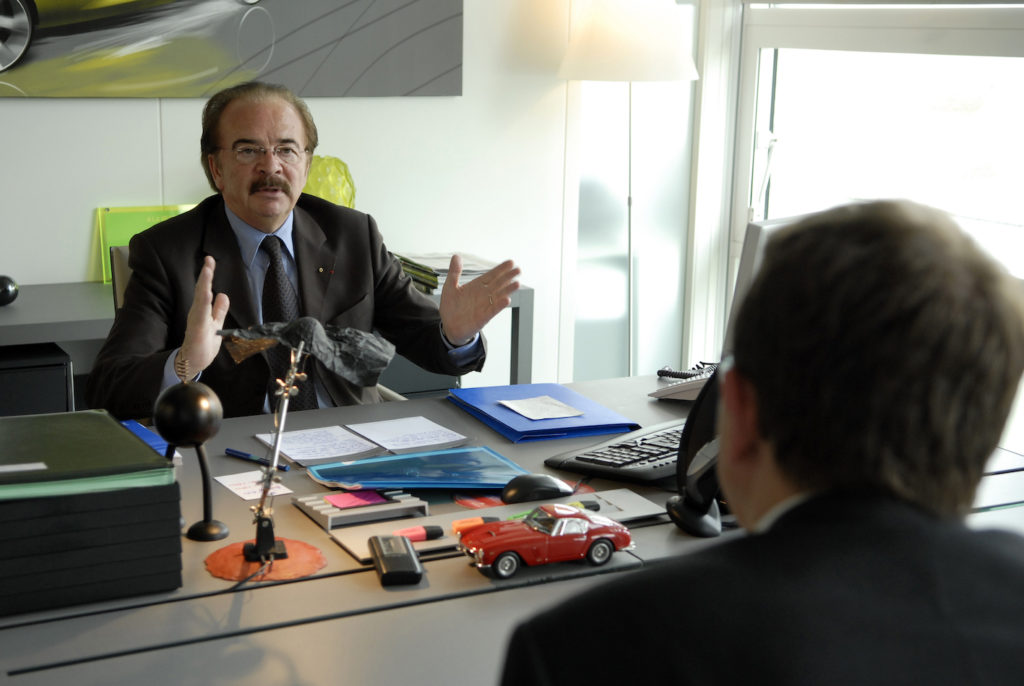 You are giving courses in India for Rubika-ISD. It is a very different world from Europe.
P.N.: “The training in India is the same as it was in Europe about thirty years ago. Kids are focused on exterior design and spend their days drawing exterior silhouettes without worrying about the interior. This is surprising because like the Chinese, Indians carpool a lot, and when they buy a car, they sit in the back first ! But to access the automobile in India, cars are four meters long (for tax reasons) and have a three-body silhouette. It results in small cars that are not very graceful. On the other hand, Indian students are undoubtedly the most car-loving. For example, an Indian student knows a brand like Koenigsegg ! They are very “zoom-zoom”…. To return to training, Strate was probably the first school to break this dynamic, this “car-like” aspect 20 years ago, by really opening up to product design.” 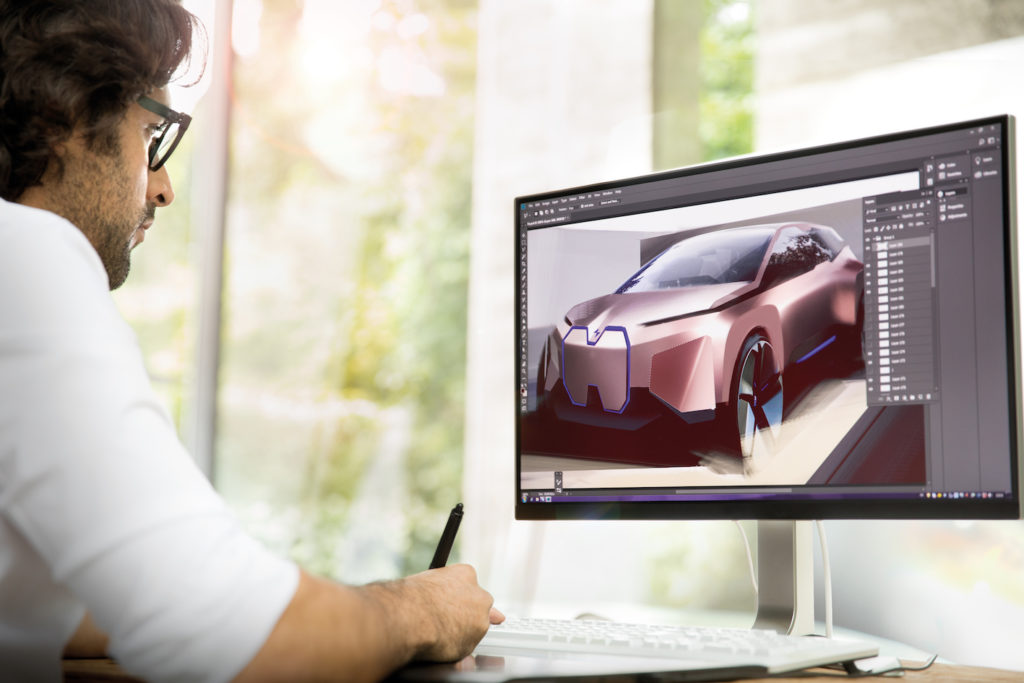 Let’s talk about the links between schools and design offices. I take the example of the Pforzheim school ( https://www.hs-pforzheim.de) in Germany, which seems to train designers for German manufacturers only !
P.N.: “Yes, I am firmly convinced that it has a direct gateway, because the designers coming out of this school are ready for use, as required by Germanic requirements. On the other hand, we often had design studios from German manufacturers who asked Strate for a few interns, other than those from Pforzheim, to provide students who came out of the mould !”

Can you tell us about the courses you teach ?
P.N.: “What I like is to give subjects that encourage students to open their minds. For example, with the theme of “praise of slowness”. Twenty years ago, if we had some money, we could go to New York in 3h30. Today, we can no longer do this and therefore we agree to double the travel time. This must have an impact on the design. I also encourage students to go beyond the world of simple style to look at automotive architecture, right down to the manufacturing process. It is good for a designer to be aware of these industrial processes to gain even more legitimacy from engineers.” 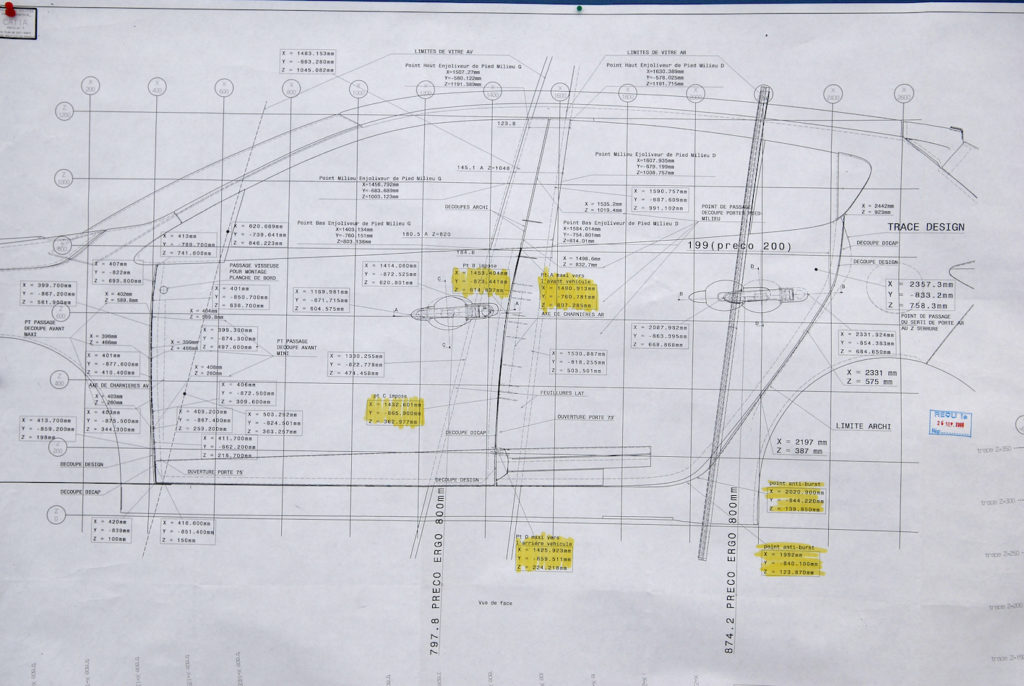 The designer’s job has changed. The stylist was involved in the modelling of plaster models ! A bygone era. Today, there is no longer any question of sculpture….
P.N.: “The most important thing in the training of students is to make them understand that the designer’s role is to open his five senses. Human perception is fundamental in this profession. Michel Harmand (Citroën designer 1934-2004, below), who taught his art at Strate for a long time, had this approach to sculpture that greatly influenced the first designers of Strate. It was a question of mastering the shape, the surface, the proportions. It was sculpture, but this type of course no longer takes place anywhere, not even in Strata, it seems to me.” 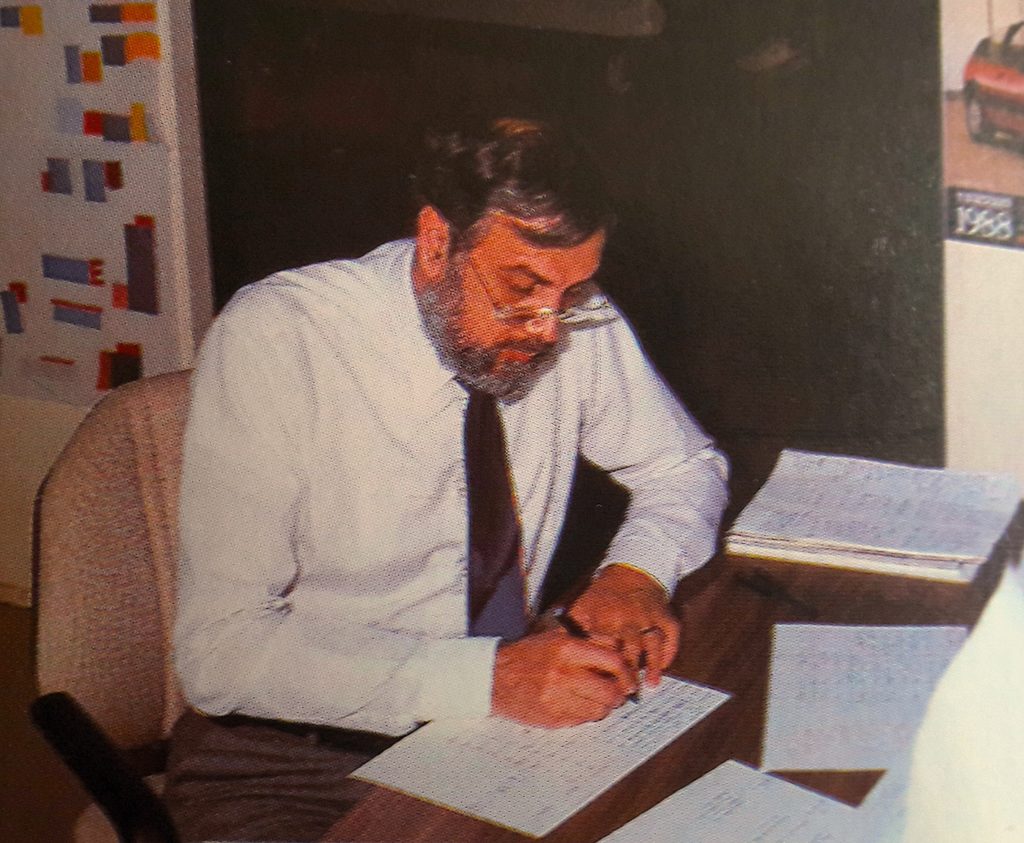 Logically, 3D modelers now assist the majority of designers in their tasks….
P.N.: “There is the specificity of the automobile object, in terms of volumes, proportions and masses. But there is also the specificity of the designer’s eye, which must be able to “read” a clay model. These skills should be complementary to training.” 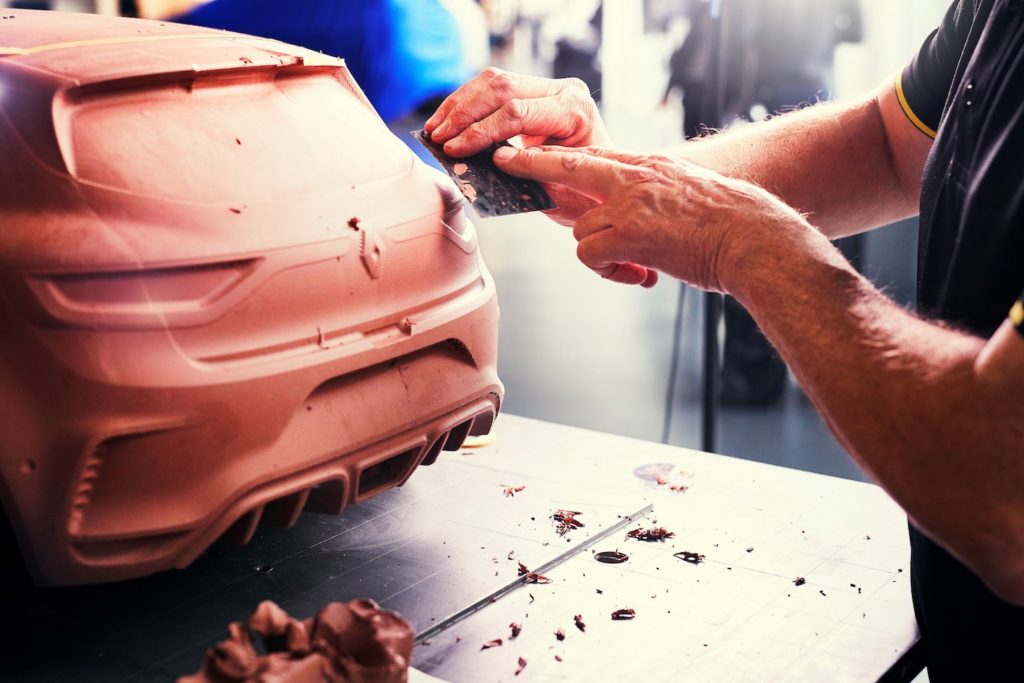 The late Gérard Welter and his sculptor’s hands, is that a thing of the past ?
P.N.: “I think it’s regrettable, yes. Just because we collaborate with digital modellers does not mean that we cannot be imbued with the magic of a well proportioned, well balanced car. And that must remain the specificity of the car designer that the product designer does not possess. This little something unspeakable about a moving object. Returning to sculpture is something essential !”