Many car designers have an unwavering passion for the world of aviation. But one woman flies above these gentlemen, exercising her art as a painter of air and space, nowadays dubbed by the Air Force. From her work emerges an emotion and an atmosphere that can only seduce. Always on the move, like the subject of her paintings, Céline puts her energy every week into her first job as “senior interior designer” at Citroën.

LIGNES/auto: Does your passion for cars go back to your childhood?
Céline Manetta: My passion undoubtedly goes back to the age of toys! I didn’t have a Barbie, I used to play with Meccano (below) or the HO trains of my father, who owned a Panhard PL17. But I always liked cars. I even remember entering and winning a drawing competition in AUTOplus when I was a teenager?

With your diplomas in hand – Baccalauréat in Applied Arts and BTS in Industrial Aesthetics – you want to enter the world of work quickly…
C.M. : After the BTS, I wanted to stop studying to enter the concrete world. I sent a letter for an interview at PSA, but I received a negative answer… I said to myself, slim, it’s too early. So I looked for an internship at Renault and I met Jean-François Venet on that occasion. He was rather enthusiastic about my approach and opened the doors for me straight away. Except that an intern has to be a student, and I was no longer a student!

And so, back to the university hut!
C.M.: I asked the director of the European Design Institute to apply for the higher education diploma in design design, even though I was six months behind in my studies! I made up for lost time by working hard and I was able to finalise my internship at Renault.

Of course, it’s a magical place with characters that are just as magical?
C.M.: I was at the Advanced Design in Boulogne Billancourt in the midst of big names: Jean-Pierre Ploué, Anne Asensio, Alexandre Malval, Axel Breun and others, like Thierry Metroz…

An internship that doesn’t lead to a job?
C.M. : After my internship, I finished my degree, and since I didn’t have the opportunity to put forward my little experience as a car designer anyway, I decided to make a nice trip: a round trip to Japan! (above)

To change jobs or relax?
C.M. : No, to find a job! It was my dream to go to Asia, I wanted to live there. I went there without even writing a letter, because I knew the answer would have been negative. At the time, the mentality was quite masculine, which is beginning to change. So I went straight to knock on the door of Mercedes’ studio in Yokohama. My chance was to meet Olivier Boulay who ran this studio. He was totally stunned by my approach and even doubted when he saw me walk in with my little portfolio in his office!

What nerve! And what does it lead to?
C.M. : He explained to me that it wasn’t possible to hire me here in Japan, because Mercedes had set up this style centre to immerse itself in the local culture. They only hired Japanese people. But Olivier Boulay still passed on my CV to the head office, telling me that I first had to discover the Mercedes culture with at least two years in Stuttgart. Personally, I didn’t believe in it too much…

And it finally worked?
C.M.: And yes! I was called by the head office for an interview! They confirmed to me that they had drawn up a contract and that I could start working with them, first in the old premises of the style, then in the heart of the modern studios in Sindelfingen. I was in the concept car department. I stayed there from 1996 to 1998, when I joined the interior design studio in Como, Italy, until 2000.

So 1996 marked the real beginning of your career as a designer?
C.M. : Yes, it was my first job as a designer. But I regret not having done enough years in the style department of production cars at Mercedes. I would have liked to have gained more experience with them. It’s true that the last two years at Mercedes in Italy were nice. I met my husband in Italy, but the working atmosphere there was nothing like the very strict German one! I wanted to go back to France.

And you’re pushing back the door of the PSA Group again?!
C.M. : Yes, in 2000 I had an interview with Gérard Welter. The current passed immediately between us because I had studied in the same high school as him, at the ‘Gué à Tresmes’ (below, Gérard Welter when he returned to the high school ‘Gué à Tresmes’, towards Meaux). Like Sylvain Henry. It certainly worked in my favour. What’s more, Gérard was a Mercedes fan, and when he saw my CV he gave me a chance.

What kind of boss was he to you?
C.M. : Gerard was quite tough. Everybody was a little afraid of him because he had learned everything on the job, he was someone who knew what he was talking about. But the atmosphere at La Garenne, before switching to Vélizy’s ADN, was extraordinary. We had all the trades there, from plasturgy to sheet metal work, all the jobs we’ve since subcontracted… We have lost this know-how. At Peugeot, I signed, among other things, the interior of the 907 concept car. (below)

2000-2020, you have just celebrated your 20th anniversary at PSA?!
C.M. : In 20 years, I would have worked for all three brands, Peugeot, DS and Citroën. Since 2007 I’ve been with Citroën as a senior interior designer where I was able to create the interior of the C5 Airscape in collaboration with the upholsterers (below)

I also designed the interior of the C-Aircross (below) and its derivative C3 Aircross series, as well as the Berlingo. Not to mention all the studies that didn’t come to fruition. We’re still a very small team of seven people in interior design, so we’re on the go every day!

And you have a… second life: painter for the Air Force!
C.M. : I’ve been creating paintings for at least ten years, even more! I started by painting cars, and my paintings are on permanent display under the name GIO at the Vitesse gallery in Paris, rue de Berry (http://galerievitesse.fr/les-artistes/). But I also love the shape of old planes, in the same way that I admire the shape of old cars, the so-called Classics.

I started going to the Paris Air Show, then to air meetings. I even took my son with me, to whom I passed the virus: he’s a pilot at 18 and wants to join the Air Force!

How does one become a painter for the air force?
C.M. : It’s a competition open to all. You have to exhibit your work, whether it be sculptures, paintings or photos. You then put together a file and you are called back to propose two physical works at a jury. During my presentation in 2019, I proposed a small watercolour and an oil on canvas with generous dimensions of 50 x 100 to put all the chances on my side.

And as a result…
C.M.: I was received in 2019. It’s a renewable contract and we represent the Air Force through our art. That’s why you need a certain stature, because we represent the army. We are not careerists, we don’t receive a salary, but our approval is signed by the General. There must be about thirty of us, ten of whom are approved for life. Today, I already have programmed works, notably two paintings to be made to illustrate the Gulf War.

Are there bridges between your job as a designer and this passion?
C.M.: Bridges? No, the automobile is an increasingly specialised field. Nevertheless, I manage to keep in my style drawings the same graphic reminders as in painting. But on the reflection itself, there is no link!
Interview by Christophe Bonnaud

CLICK ON THE PHOTO to find and order the works of Céline Manetta : https://www.giomanetta.fr/ possibility of special orders 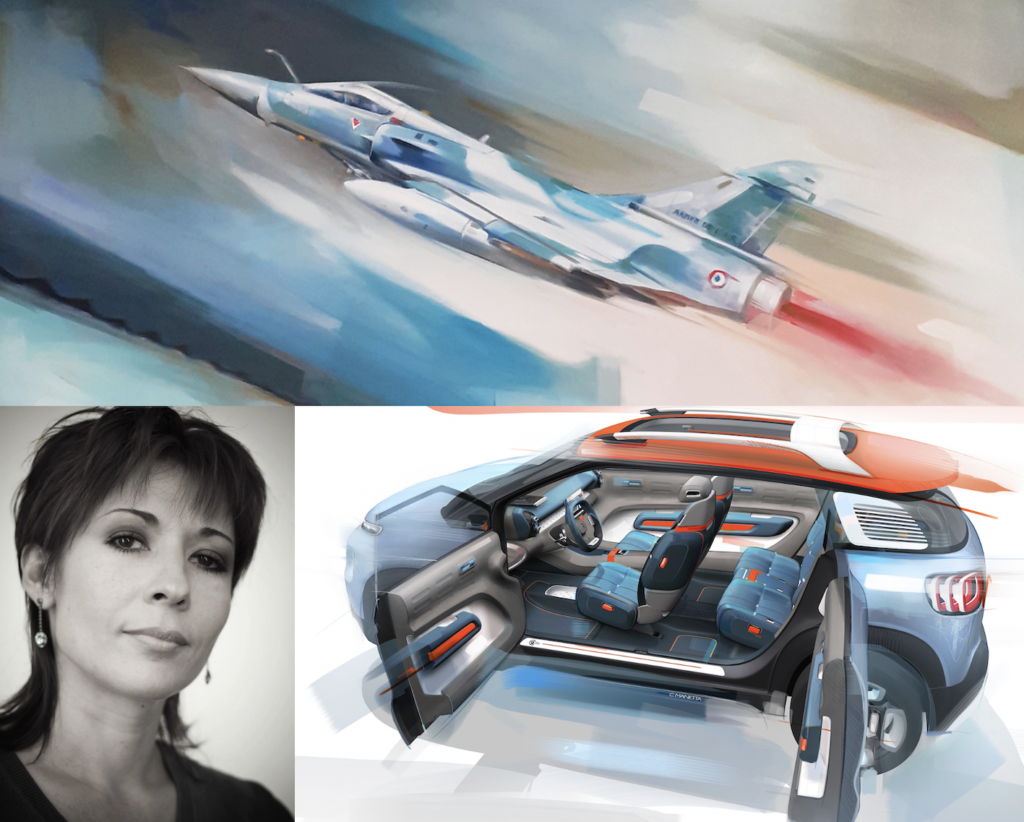