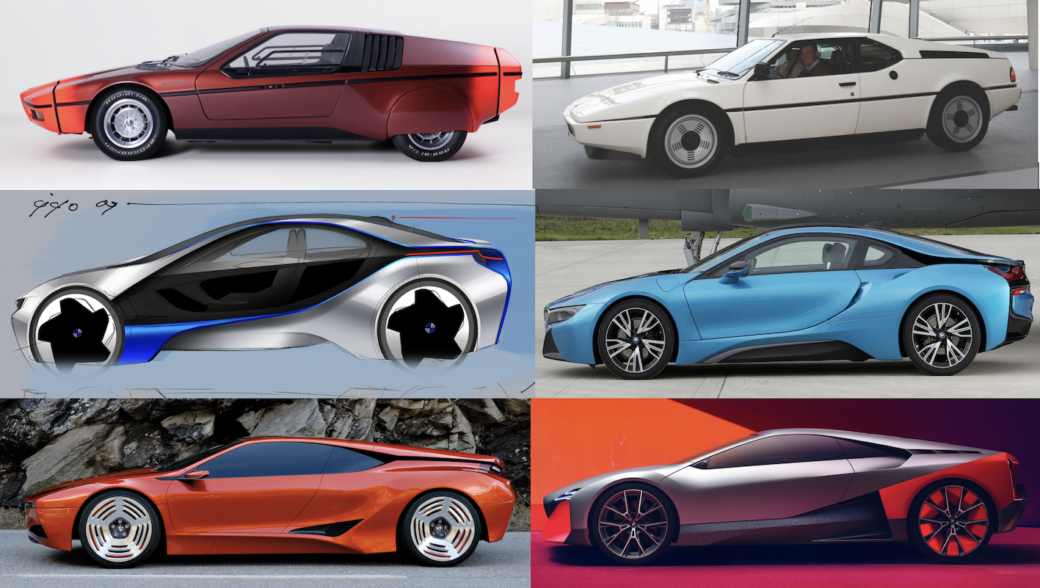 LIGNES/auto, it’s also a You Tube channel https://www.youtube.com/channel/UCtd0i6ZUwsguWsDwwfiK3cA and a Facebook page : https://www.facebook.com/lignesauto/?modal=admin_todo_tour

A new BMW concept car is always an expected event. This time, with the Vision M Next concept, BMW wants to reassure lovers of motoring sensations and pleasure by confirming that even with electric madness, BMWs will remain engines of emotion and passion. And explain that the “line” M will keep its fundamentals, even when it is electrified! (video at the bottom of this post)

This concept is characterised first of all by its tint with front and rear parts painted in matt orange “Thrilling Orange”, which contrast with the metallic “molten silver” paint. And of course, this new BMW probably reminds you of other iconic models… We will come to this, but first, a few words about this M Next Vision.

With its two-tone horizontal segmentation, the rear design (below) accentuates the width of the car. The lights are equipped with Laser Wire technology and extend to the outer vertical line of the rear wing. The BMW logo – with a modern and two-dimensional touch – refers to the BMW Turbo and BMW M1 and floats in these lights.

The front part below is inspired by two iconic BMW design themes: the the two-part grille and the four optics, which also feature Laser Wire technology.

The drawings come from the small BMW M design studio for which the current owner of the Citroën style was responsible. We will see that the BMW Turbo and M1 icons have largely influenced this small group of designers. But not just these two BMWs….

BMW explains that one of the development themes is of course… the driver: “The intelligent technology of the BMW Vision M NEXT – based on the D+ACES modules (Design + Autonomous driving, Connectivity, Electrification and Services) for the future – makes the driver the ultimate “pilot”.” Below.

“The BOOST Pod is the interface between the driver and the vehicle. It integrates all controls and information on three visual levels directly in front of the driver. The foreground is formed by the horizontally arranged steering wheel with two small screens. The second plane is a curved glass screen, that stretches behind the steering wheel. The head-up display of augmented reality over the entire surface of the windshield is the third plane.”

“The information displayed adapts to the speed. The higher the speed, the more accurate the information is and the more it moves within the direct field of view of the driver. In 3D as in the…. Peugeot 208 !

It is time to situate this creation in the chronology of the models that were inspired by the brand’s icons. Because why hide it, the Vision M Next concept car runs like so many other BMW concept cars since 2008 around the M1. Interpretations that are beginning to make you dizzy ! A creative spiral that we would like BMW to come out of one day. Alfred Jarry, as Patrick Le Quément quotes in his book to be published at the beginning of September http://lignesauto.fr/?p=10829, used to write that “when you cross the line, there is no limit”. Here is a small reminder of these creations….

BMW Turbo – 1972 – It is the first true BMW concept car forever. Presented at the Geneva Motor Show in 1972, the BMW Turbo E25 Turbo was designed by Paul Bracq and produced in two copies. It is powered by the 2.0-litre four-cylinder turbocharged engine of the eponymous model in the range, and develops 280 hp. A V12 version has been created in the form of a reduced scale model of which Paul Bracq has a copy at home !

BMW M1 – 1978 – It is said to be the child of the Turbo ! This project, known as code E26, was designed by Jochen Neerspach who subcontracted the program to two prestigious Italian signatures: Lamborghini for the first chassis and Italdesign for the style. Giorgetto Giugiaro designed the M1 but also assembled the 455 units in Moncalieri.

BMW M1 Hommage – It will be necessary to wait until the 30th anniversary of the BMW M1 for BMW to celebrate this date with great care. Benoît Jacob is in charge of the design of this revival unveiled during the Villa d’Este elegance competition in 2008. The opportunity for the manufacturer to bring out the original M1 and the Bracq Turbo to capture the event.

BMW Vision EfficientDynamics – 2009. A year later, the same Benoît Jacob took over the management of the new BMWi branch, which still only exists behind the scenes. BMW feels the wind turning and offers its futuristic vision of the hybrid sports coupe with the Vision EfficientDynamics concept car. It will be followed in 2011 by the i8 concept car, prefiguring the production car.

BMW i8- 2013. Introduced in 2013 and marketed from 2014, the BMW i8 and its little sister i3 launch the virtuous – even ecological…- BMWi line. The BMW supercar is a hybrid with a small 1.5 three-cylinder engine for a combined power with electric machines of 374 hp (in 2019). Above all, this vehicle allows BMW to control the entire production chain of CFRP (Carbon Fibre Reinforced Plastic) parts. On the design side, Benoît Jacob, author of the i8, is leaving BMW for China…

BMW Vision M Next- 2019. Here is a concept car designed by the BMW M line, a Motorsport name born with the 1978 M1. The circle is complete. But this Vision of the future is still very much rooted in the fundamentals of the famous M1. You may say it was intended. True, but what does BMW have in store for the 50th anniversary of the M1 in 2028 ?

Perhaps the answer lies in the BMW (not BMW M) Vision Next 100 concept car ? (below)

THE VIDEO BMW VISION M NEXT