We are going to dive into the universe of a manufacturer of hyper-luxury. A French brand belonging to the German Volkswagen group, Bugatti has just celebrated the production of the 200th copy of the Chiron. Let’s discover how this supercar is produced in Molsheim. (part 1 of 2)

In Molsheim, Alsace, where the brand took root in 1909, Bugatti makes the dreams of all car lovers come true with its Chiron. However, there are several steps to consider before the customer receives his new Chiron. The first is the configuration of the vehicle, which the customer carries out with a designer from the house.

Bugatti does not refer to the term “production”, because it is a question of assembling models that are unique pieces because they are manufactured according to the customer’s own wishes. The Alsatian brand attaches great importance to the personalisation of its cars.

The basic bodywork palette consists of 23 paint colours and 8 carbon fibre variants. For the interior, the choice extends to 31 leather colours and 8 Alcantara colours, 30 colours for the seams, 18 for the carpet and 11 for the belts. And if that’s not enough, customers also have the option of choosing from a panel of thousands of other paint colours. They can thus adapt the colour tones to those of their favourite handbag or to the label on the bottle of their favourite mineral water.

The first Bugatti Chiron were delivered to their owners in the first quarter of 2017, already ! In that year, nearly 70 units were assembled in the Molsheim plant.

On average, six months are required between the start of a vehicle’s production and its delivery. The French workshop has only about twenty employees who have to assemble nearly 1800 parts ! This quasi-artisanal assembly is supported by a series of extremely strict quality controls. As the manufacturer points out, the production of the Chiron is rather to be compared with “French Haute Couture” !

Several transformations were required in Molsheim to switch from the Veyron’s production to the 1,500-horsepower Chiron, in order to adapt the installations to the increased performance and, in general, to the increased complexity of the vehicle and its manufacture.

Only after the customer has confirmed the configuration of his vehicle by signature does production planning begin and all the small gears of a complex and draconian process begin in the Molsheim factory. On average, six to nine months are required to complete the Chiron, depending on the degree of customization, before it leaves the workshop. The more unusual the customer’s wishes, whether in terms of materials, colours or other details, the longer the manufacturing process will take.

When the customer’s vehicle has received the start of its production, the various components can then be ordered. It is from this moment that the race against time begins : six months will now pass until delivery. Bugatti’s suppliers, spread throughout Europe, are working hard to ensure that the various parts can be delivered to Molsheim on time.

One month before the start of production in Molsheim, the bodywork is assembled for the first time from the monohull and the frame structure, in order to ensure the good cohesion of the whole. Each part is then assigned a number and sent to the paint shop where they spend three weeks, the time necessary to apply the different layers of paint and varnish. Six layers are applied to the carbon fibre.

The next step marks the beginning of the assembly of the Chiron in Molsheim. On site, the production and logistics manager, who worked on quality in the Volkswagen group, ensures that the process runs smoothly. “Here in Molsheim,” he tells us, “we have a small factory and a warehouse. Our installations and processes are therefore incomparable to other automotive production plants. At Bugatti, just-in-time takes on a whole new dimension.”

The Chiron manufacturing plant, called “Atelier”, covers more than 1000 m2. It was inaugurated in 2005 and forms an oval building, in reference to the logo of the French brand: the Bugatti button. The workshop was designed by the renowned German architect Gunter Henn. It is here that the Veyron 16.4 and its variants have been built for more than ten years.

At Bugatti, no assembly lines or robots are used. The workshop is more like a Formula 1 stand, divided into boxes. There are twelve production areas in total. The first is preparing the transmission system that is already being assembled from the Volkswagen Group’s engine plant in Salzgitter, Germany.

Experts manufacture the 1,500-horsepower engine in a pilot hall specially designed for Bugatti before sending it to the test bench where it is tested for eight hours. The larger and more robust 7-speed dual-clutch gearbox is subjected to a battery of similar tests to meet the demands of the Chiron’s increased power and phenomenal torque of 1,600 Nm. 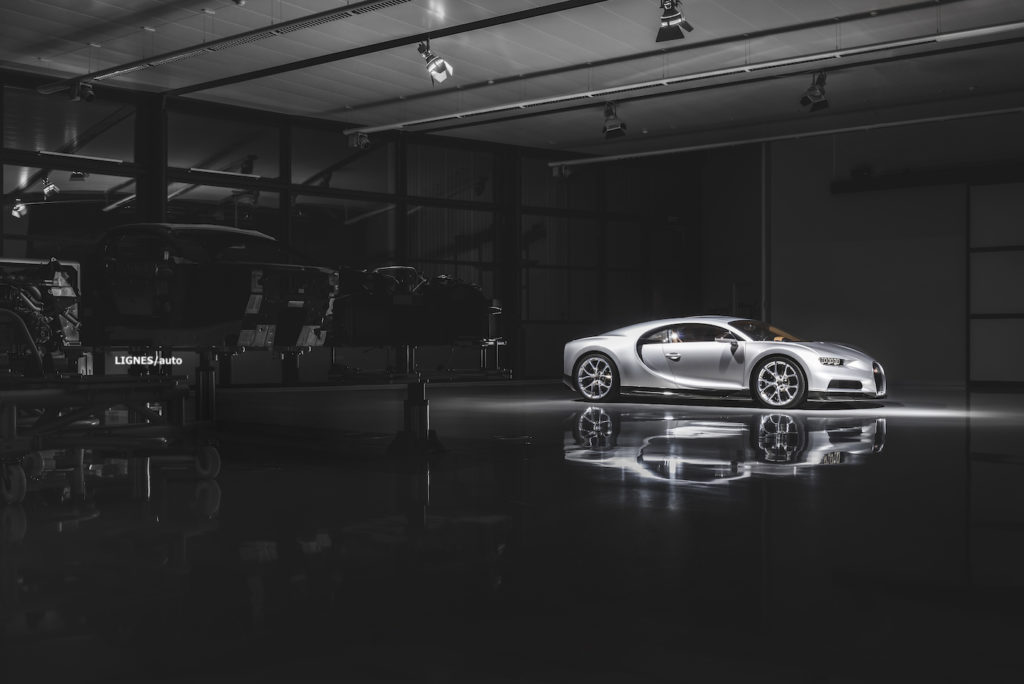