Pininfarina is 90 years old and one of its most emblematic concepts, the Modulo designed by Paolo Martin, is celebrating its half-century this year! A stamp designed by Pininfarina celebrates!

Today, 8 October 2020, the Ministry of Economic Development is issuing a new stamp in the thematic series “The excellence of the productive and economic system” dedicated to Pininfarina on the occasion of the 90th anniversary of its foundation. With a print run of 400,000 copies, each with a face value of 1.10 euro, the stamp is a true collector’s item: the vignette reproduces the Modulo concept car, based on a Ferrari, which made its debut exactly 50 years ago.

Printed by the Istituto Poligrafico e Zecca dello Stato S.p.A., the stamp was designed by Pininfarina. The “first day” cancellation was available on 8th October at the philatelic counter of the post office in Cambiano (Turin), Pininfarina’s home town.

The ceremony took place on 8th October at Pininfarina’s headquarters in Cambiano, in the Sergio Hall. This is an ultra-technological room that is used for the presentation of physical and virtual models. The room has proved to be a unique asset in recent months, when travel restrictions have prevented face-to-face meetings.

“Car design meets the fascinating world of philately and gives life to a miniature work of art”, comments President Paolo Pininfarina. “This new recognition is a wonderful gift for our anniversary. It is proof that after 90 years we continue to live in the collective imagination as a symbol of Italian style, that combination of elegance and innovation that the rest of the world identifies with our country”.

“Pininfarina has built 90 years of innovation”, adds CEO Silvio Angori. “The symbol of this journey is the Modulo, still considered, half a century later, as an icon of automotive design. As designers, we are always called upon to anticipate the next day on the basis of our dreams and to interpret technology in an emotional way. This will still be our mission, even after we reach 100 years”.

The Modulo concept, represented on the stamp with the “Pininfarina 90” logo on a white background, is a special, extreme, single-volume berlinette. It is a unique experimental prototype of a futuristic car that breaks the codes of the traditional stylistic language. It was presented at the Geneva Motor Show in 1970 and won 22 international design awards, including the prestigious “Award For Design Excellence” from “Automobile Quarterly” for “pure formal research in its intentional geometry”..

The boldness of its solutions led to the car being chosen to represent Italian bodybuilders at Expo 1970 in Osaka, and the Modulo was exhibited in Mexico City the following year as an ambassador of Italian design. It quickly became the archetype of 1970s car design: from then on, a number of supercars would find their inspiration in this project.

Developed on a Ferrari 512S chassis and only 93 cm high, the Modulo is characterised by two overlapping body shells, separated by a rectilinear cut-out at the waist. The front, roof and boot are joined together in a single arched curve; the wide windscreen is bordered by truncated cone-shaped pillars that considerably lighten the front surface. Access to the cockpit is by sliding the entire dome, including the windscreen, on special guides. The interior of the cockpit is basic, with two anatomically shaped, wrap-around seats that are very elongated, for a perfect driving position and perfect seating for driver and passenger. 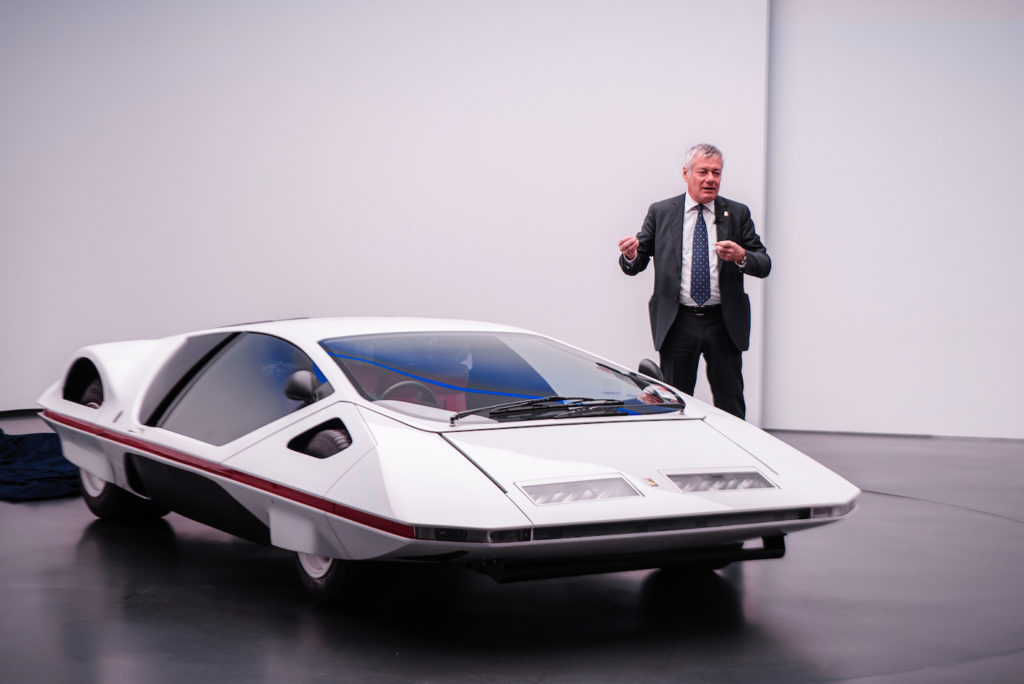