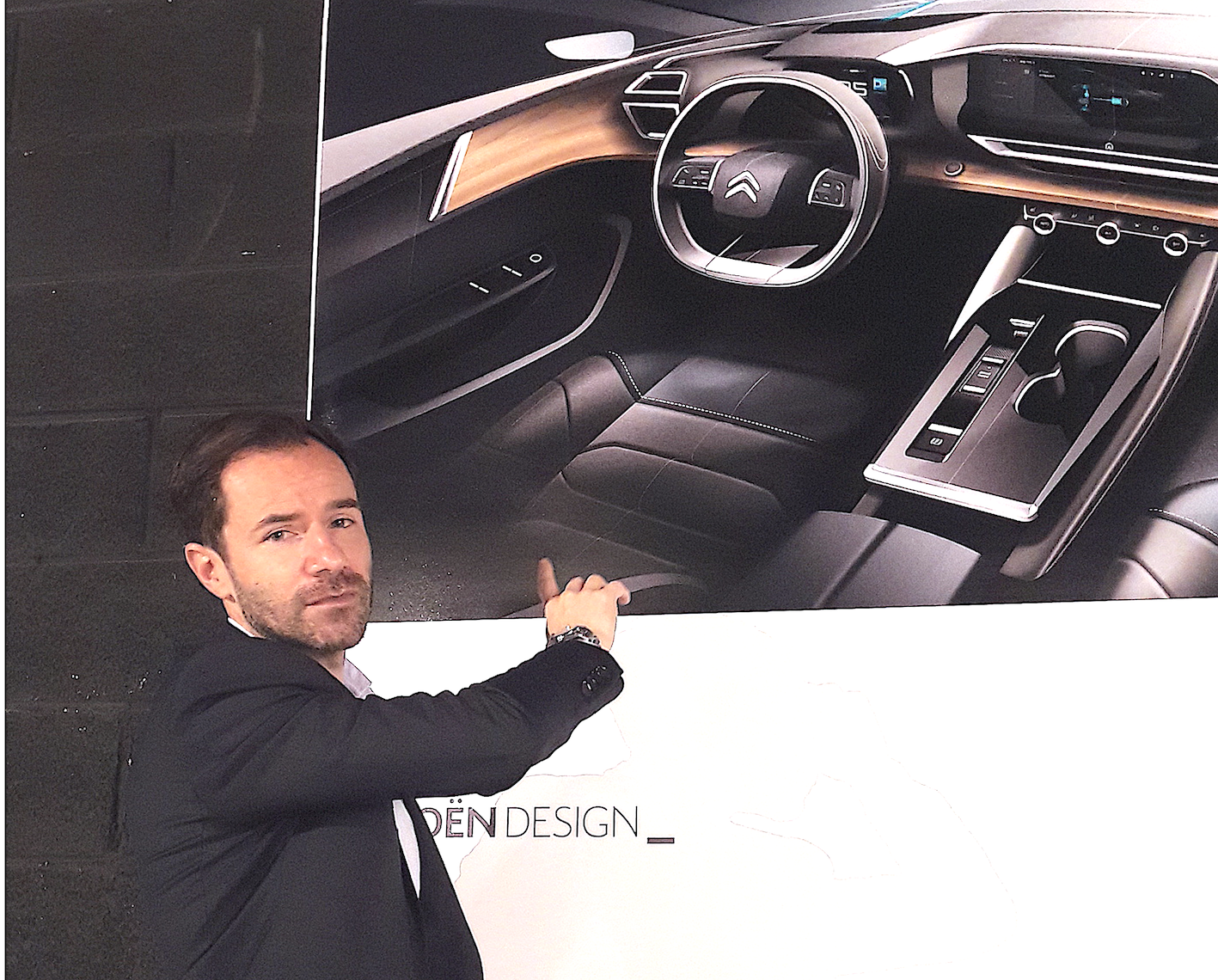 Jean-Arthur Madelaine’s career has taken him back and forth between Mercedes and BMW, from 2003 to 2014, between Germany, Italy and Los Angeles. In 2014, he returned to Los Angeles for half a year to work at Tesla before moving to Citroën that year as head of interior design. “Since 2014 I’ve been in charge of Citroën’s interiors styling, and in addition for the last 2 years, Hélène Veilleux’s teams – colours and materials – and those of UX (User eXperience) for the graphic part.”

Since 2014, there has been no grand touring programme, apart from the development of the CXperience concept car, above with the C5 X. However, Jean-Arthur explains that starting from scratch with the concept car as a support, “it brings freshness and a new look! And that was the role of CXPerience, a superb exercise.”

“We’re a small team of designers, and it’s the same team that has experienced these two creations practically in parallel. We were therefore largely inspired by the concept car, but for the target segment, we couldn’t incorporate the yellow! On the other hand, we transferred the formal language to the C5 X, in particular by taking up the spirit of the concept, which had a sort of tube on either side of the dashboard with this 3D wood covering. The design of the door medallions in the concept has also been reinterpreted on the C5 X, because we wanted to keep this alcove spirit to give the car width. It’s statutory, perfect for the segment.”

The traditional horizontal dashboard of Citroën retains its vertical side vents, but its structure has evolved with three layers. The decor layer is new. “It’s more related to the segment. We can afford this connection between the dashboard and the doors, with precise adjustments. You don’t necessarily see that on a car in the lower segment. There’s also the theme of the CXperience muscle, a piece that ends with the vertical air vents. This round, solid element, with engineering and gloss black in this area – or chrome finish , is reminiscent of the generous shapes of the concept.”

Brazilian designer Diogo Jo’s project was chosen. “Diogo participated in the competition for the interior design of CXPerience. His theme was not selected (the author is Jérémy Lebonnois) but he was inspired by it for C5 X. The concept allowed us to experiment with a new formal language and led to a phase advance which we used for the production project.” But CXperience is also a reinterpretation of the 1974 CX. “We had a CX in the studio for a while to see if there were things that could inspire us. In particular, we looked at the single-spoke steering wheel because we wanted a very wide, glossy black lower spoke. It’s little jobs like that that we draw from our heritage.”

Why didn’t we dare to go a little crazy by reinterpreting the CX’s ‘lunule’ designed by Michel Harmand? “We push our research very hard, that’s what Jean-Pierre Ploué asks of us. It’s our daily struggle to push for elements specific to Citroën. We can imagine it for something which is not transversal to the whole group.” The ‘lunule’ did indeed include controls that are now accessible via the screen and therefore common to the group… “But all of Michel Harmand’s work, his inspirations, are still present in the studio because there are designers in our teams who were his students at the time.”

1– The seat was supposed to receive the blue leather at the end of the seat. It will finally receive it at the top of the backrest.
2- The interpretation of the CXperience concept car takes on its full dimension here with the decoration that extends onto the door with its “wood” look.
3- The air vents are vertical, as on the brand’s recent creations.
4- The head-up display is of the latest generation and can be configured.
5 – The 12-inch screen is integrated into the “muscle” of the dashboard.
6- The air conditioning controls are still physical.
7- A third layer allows the creation of a decorative zone with ambient lighting.

A 12-inch screen on board, like in the DS 7 Crossback, is quite restrictive for the interior design! “When you start designing, you know where the vital elements of the dashboard are located, such as the screens, air vents, etc. Obviously, you have to consider their positioning and integration. Obviously, we have to take into account their positioning and integration. We knew at the beginning of our work that the screen was a 12-inch and that it had to be located exactly where it was. Nor should we overlook the strategy of those responsible for the interior design regarding the compromise between the integration of the screen from an aesthetic point of view and the ergonomics of use. We wanted to position the screen above the air vents, because the placement of the air vent-screen duo is one of our main challenges, and this is true for all manufacturers.” Peugeot has dealt with this constraint differently with its 308 and its air vents located at the very top of the dashboard. “We don’t all have the same strategy, because we don’t all have the same markets, and that obviously varies from one model to another.”

As for the timing, the days when interior design would get down to work well after the exterior styling colleagues are long gone. “The timing today is more or less the same between the two departments. We have some specific milestones in terms of colours and materials and everything that happens in the screens, but in the end the schedule is quite similar.”

Did Jean-Arthur Madelaine’s team experience any hard points during the development of this programme? “It’s a bit like our daily routine! Having worked on a number of SUVs before this programme, I think that the most important learning experience for us and the designers was when we had to find the subtleties of using Citroën’s codes in a highly codified segment.” It is true that Citroën designers had not seen a large saloon project since the C6 in 2006! “We did work on the Chinese C6 on the BVH3 platform of the old Peugeot 508!” says Jean-Arthur.

Above, note the evolution between the latest C6 dashboard with as many controls as in a Soyuz, and that of the C5 X with the ‘physical’ air conditioning controls and the others integrated into the touch screen.